New Greek prime minister to roll out painful austerity measures | Europe| News and current affairs from around the continent | DW | 11.11.2011

Greece's new prime minister, Lucas Papademos, is at a crucial crossroads. He needs to pull the country back from the brink of bankruptcy and convince creditors that tough reforms will be implemented. 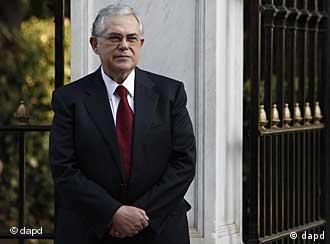 Greece's new unity government was named on Friday after a key power-sharing deal was struck between the country's main political parties a day earlier.

The new cabinet was sworn in by Greece's leading cleric, Archbishop Hieronymos, with Finance Minister Evangelos Venizelos retaining his key post. The cabinet includes ministers from the country's two main parties, and also a number of far-right lawmakers.

Economists have welcomed the choice, saying new interim Prime Minister Lucas Papademos was a safe squire of reforms who was less likely to waver on tough decisions than politicians loathe to support austerity measures.

Emerging from coalition talks to face reporters on Thursday, a somber Papademos called on the country to unite behind him after months of divisive politicking as he sets out to secure a bailout from the European Union that will impose yet more hardship on the Greek people.

"The Greek economy is facing huge problems, despite the efforts undertaken. The choices we make will be decisive for the Greek people. The path will not be easy, but I am convinced the problems will be resolved faster and at a smaller cost if there is unity, understanding and prudence," Papademos said. 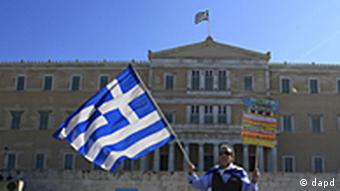 Papademos, 64, is the former vice president of the European Central Bank and Greece's former central banker. He is highly regarded internationally for his banking expertise and is viewed by many as the right man to steer Greece out of its precarious economic and financial crisis.

His appointment was held up for four days as Greek party leaders squabbled over various demands in trying to hammer out a deal on a national unity government. The prolonged political bickering took its toll, moving the country closer to an economic abyss. After the announcement, however, markets bounced upward.

Outgoing Prime Minister George Papandreou had caused chaos last week by calling a referendum on the EU/IMF bailout package, a vote which might have seen Greeks rejecting the package because of the austerity measures tied to it.

Papandreou backed down, but was forced to make way for the unity coalition.

Earlier in the week, the European Union warned that the Greek debt crisis and prolonged coalition talks were dragging Europe into a new recession, deepening the sense of gloom already hanging over the bloc.

But the French Central Bank responded quickly, saying Credit Agricole and Societe Generale were strong enough to withstand any pressures which could arise from the Greek debt crisis.

Frustration at home, in Brussels

Papademos and his new cabinet will have their work cut out for them. The stakes are high. As well as winning parliamentary approval for an EU bailout, the new coalition has to pass the country's 2012 budget and secure the latest 8-billion-euro ($5.73 billion) installment of Greece's original rescue package to avoid bankruptcy in December, when big debt repayments are due. 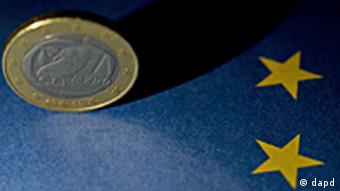 Greeks have grown increasingly outraged over the political deadlock that has arisen over the approval of the EU/IMF bailout package.

"A national unity government, right now," daily newspaper Ethnos said on its front page earlier this week. "The country and society cannot endure this any more."

Frustration has also been apparent in Brussels this week, where officials said the new government had to show it was serious about implementing its promises to EU and IMF lenders in return for the bailout agreed last month.

"It is essential that the entire political class is now restoring the confidence that had been lost in the Greek commitment to the EU/IMF program," said EU Economic and Monetary Affairs Commissioner Olli Rehn.

Weary of broken promises from Athens, Rehn said the coalition must "express a clear commitment on paper, in writing, to the EU/IMF program," demanding that both coalition parties sign off on pledges to continue with financial obligations.

For two years, the EU has labored to solve the problems of Greece, a very small part of the bloc's economy, leading to doubts about how it would manage if the debt crisis engulfed the far bigger Italian or Spanish economies.

The struggle continues for European leaders to bring the escalating eurozone debt crisis under control. DW gives you the background on the latest emergency measures and outlines what is at stake for the global economy. (11.11.2011)

Papademos the pragmatist: a portrait of Greece's new prime minister

Former European central banker Lucas Papademos has been appointed as Greece's new interim prime minister. Politicians needed almost four days to agree on a candidate, who had been the favorite from the start. (10.11.2011)