New international organization to bring world religions under one roof | Europe | News and current affairs from around the continent | DW | 14.10.2011

New international organization to bring world religions under one roof

Saudi Arabia has financed the founding of a new international organization in Vienna designed to bring the world's religions together. The organization hopes to prevent conflict through interfaith dialogue. 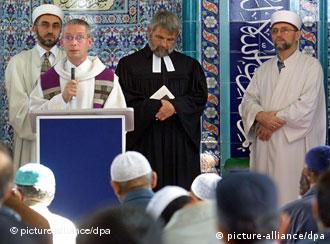 The organization hopes to foster peace through dialogue

The foreign ministers of Austria, Saudi Arabia and Spain signed the founding treaty of a new international organization designed to foster dialogue between the world's major religions on Thursday.

"The thesis is valid that world peace cannot exist without peace between the world's major religions," Saudi Arabian Foreign Minister Prince Saud al-Faisal said during the signing ceremony in Vienna.

The King Abdullah Center for Interreligious and Intercultural Dialogue, initiated and financed largely by Saudi money, is set to have its seat in Vienna. Plans envision an organization with a governing body composed of 12 representatives from the world's five largest religions.

The governing body is set to be staffed by two Muslims (Sunni and Shiite), three Christians (Catholic, Anglican and Orthodox), a Buddhist, a Hindu and a Jew. The organization will also have a consulting body with 100 representatives from the five world religions plus other faiths as well as academics and members of civil society. 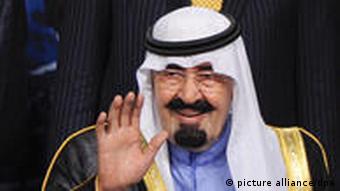 Saudi King Abdullah initiated the idea for the center after visiting Pope Benedict XVI at the Vatican in 2007, the first Saudi monarch to do so. Shortly thereafter, King Abdullah stated that Christians and Muslims should offer a common message of peace to humanity.

Abdullah then initiated an interfaith dialogue in Mecca in 2008 followed by a second meeting in Madrid with Jewish representation. A third meeting took place in Vienna's Hofburg in 2009, where the concept of the organization was agreed upon.

The Initiative of Liberal Muslims protested Thursday's signing ceremony in Vienna, saying that the center was an attempt by Saudi Arabia to spread a conservative form of Islam.

The head of Indonesian bishops says Islamic fundamentalists in Indonesia are attacking Christians with impunity. Intolerance seems to be on the rise despite the fact that freedom of religion is guaranteed. (05.10.2011)

Paris has introduced a ban on saying prayers in the street, a practice by French Muslims unable to find space in mosques. The government claims it is trying to protect French secular values. (17.09.2011)