Paris has introduced a ban on saying prayers in the street, a practice by French Muslims unable to find space in mosques. The government claims it is trying to protect French secular values. 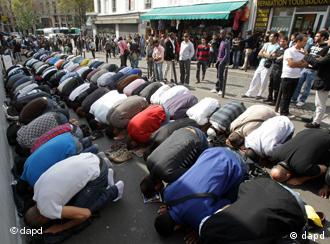 A ban on praying in the street came into force in France on Friday, forcing Muslims who complain that they do not have enough space in mosques to find temporary premises to practice their religion.

France is home to the biggest Muslim minority in Western Europe.

French Interior Minister Claude Gueant had warned earlier this week that there would be "no prayers in the street from September 16."

"If anyone happens to be recalcitrant we will put an end to it," Gueant said, suggesting police could be deployed to stop those who continued to pray outside. The move has been condemned by some who claim it is an attempt to appease the French far right.

The new ban came into force at midnight (22:00 GMT) on Thursday, in time for traditional Muslim Friday prayers.

In two cities, Muslims who claim there is not enough space for all members of the community to pray indoors were directed to temporary spaces on Friday.

That included a makeshift prayer site in a disused fire station barracks in northern Paris, while a new prayer space is being built in the city.

An overseer at the barracks said the space, with a capacity of 2,000, was full.

"It's the beginning of a solution," Sheikh Mohammed Salah Hamza told Reuters news agency. "The faithful are very pleased to be here. "

Mosque leaders in the multi-ethnic Goutte d'Or district are to rent out the barracks for three years following an agreement with the City of Paris.

Authorities in France's second-largest city Marseille, where mosques also overflow at times, said they had also located a space for Muslims to pray away from the street.

A strict separation of the church and state in France means that public displays of religious observance are frowned upon.

The issue of street prayers, which see Muslims spreading mats on sidewalks, turned political when the far-right National Front claimed it was proof that Islam threatens the secular values of the country.

Party leader Marine le Pen controversially compared the act of praying in the street to the Nazi occupation of Paris.

In April, France became the first EU country to ban the wearing of the full-face Islamic veil in public.