Fred Flintstone is about to retire and Pebbles is an adult: "Bedrock" is set 20 years after the events of the classic series. A look back at what made the original so popular. 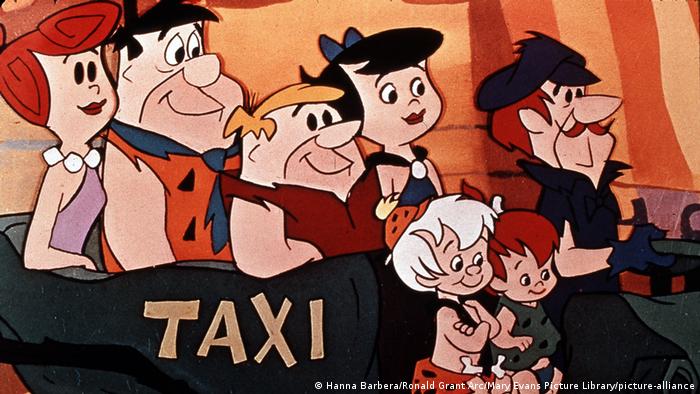 A sequel to The Flintstones is officially being developed by Fox Entertainment.

Titled Bedrock, the new animated series will revisit the Flintstone family two decades after the events of the original show. The Stone Age is about to be replaced by an enlightened new Bronze Age. Fred Flintstone faces retirement, while his daughter, Pebbles, is now a 20-year-old embarking on her own career.

Elizabeth Banks, star and director of Charlie's Angels (2019), is an executive producer of the show and will star as Pebbles' voice.

"Long before the Simpsons and Springfield, the Griffins and Quahog or even when the Belchers started serving burgers on Ocean Avenue, there were the Flintstones and Bedrock," said Michael Thorn, president of entertainment for Fox Entertainment, in a statement. "Their imprint on the animation universe is undeniable and the idea of adapting it for today's audience is a challenge."

"No pressure whatsoever, really," he quipped, in reference to the original series' iconic status.

Well aware of the pressure on her shoulders, Lindsay Kerns, the series screenwriter who also scripted Netflix's Jurassic World: Camp Cretaceous series, reacted on Twitter to Thorn's comment with a crying laughing emoji. It's "been a yabba dabba delight to write, and I can't wait to share it with the world," she added.

They drove cars made of logs, went to prehistoric drive-in movies and picked up take-out dinners — huge brontosaurus ribs — at their neighborhood drive-in burger place.

Always joining in on the fun were their neighbors (and best friends) Barney and Betty Rubble, with their supernaturally strong son, Bamm-Bamm. 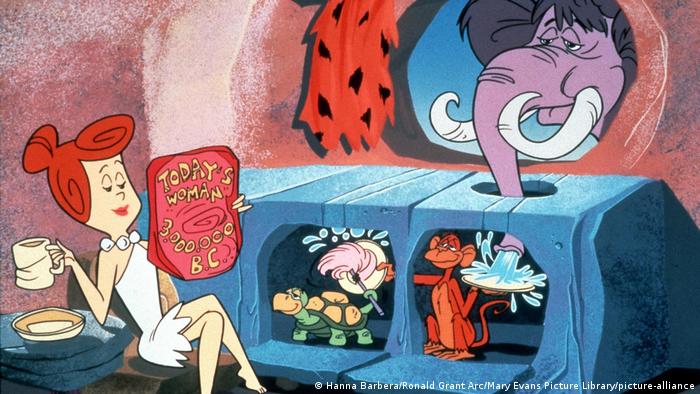 Wilma, waiting for her 'dishwasher' to finish up

The sitcom-style series created by the Hanna-Barbera cartoon studios was originally broadcast on the ABC television network from September 30, 1960 to April 1, 1966, followed by decades of reruns. It premiered on prime time TV, and the stories about the Flintstone and the Rubble families were an instant hit.

Some Flintstones trivia: The series is seen as a riff on The Honeymooners, a classic American TV sitcom from the 1950s about two couples, created by and starring American actor and comedian Jackie Gleason. Unthinkable today: The main male character in The Honeymooners would regularly threaten to beat up his wife; in The Flintstones, Fred would rant and rave, but it was Wilma who would actually beat her husband over the head with a rolling pin. 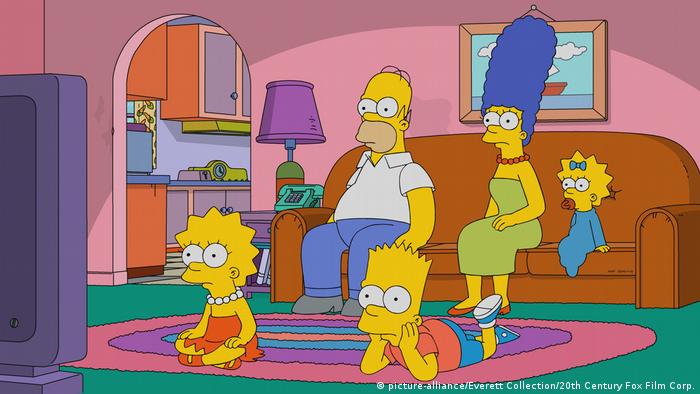 The Simpsons on the couch

The Flintstones was the most financially successful and longest-running network animated television series until Matt Groening's The Simpsons debuted in late 1989; new episodes have been produced ever since.

"Flintstones, meet the Flintstones, they're the modern Stone Age family..." Beginning in Season 3, Meet the Flintstones was the show's cheerful opening and closing theme. The tune, recorded with a big band, was inspired by the second movement of Ludwig van Beethoven's Piano Sonata No 17 from 1802. 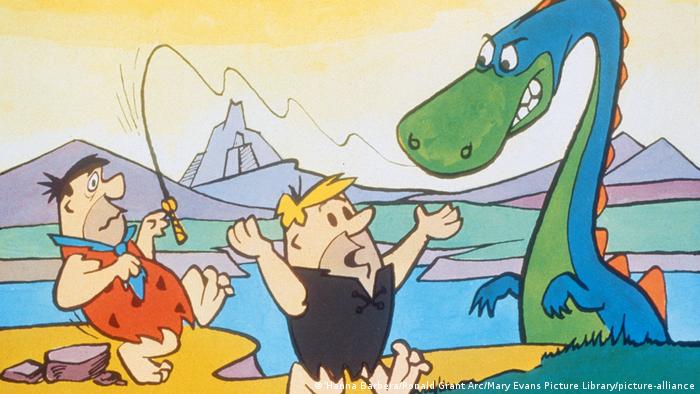 Sticking together through thick and thin: Fred Flintstone and Barney Rubble

Fred was first meant to yell a trademark "Yahoo!", but legend has it the actor who was his voice, Alan Reed, came up with something much better by integrating the slogan "a little dab'll do ya" — sources ascribe it to either the actor's mom, or to an ad tune for a brand of hair grease.

The cartoon series was also translated into French, Chinese, Portuguese, Dutch, Spanish, German and other languages, presenting the various production teams with the challenge of coming up with a local version of the iconic "Yabba-dabba-doo!" 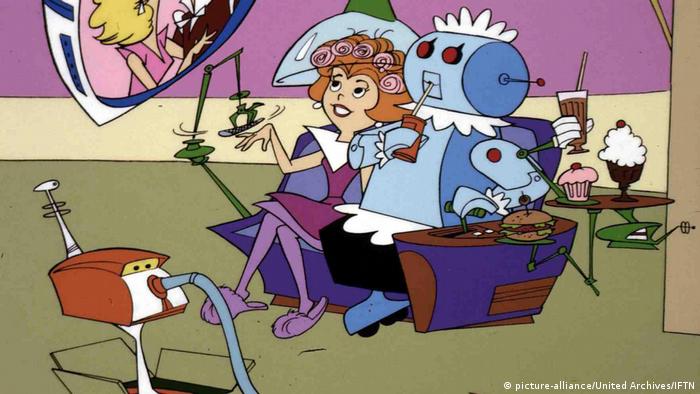 The household aids in 'The Jetsons' are more hi-tech

As for The Flintstones themselves, the show has already generated numerous spinoffs in the past, including short-lived series like The New Fred and Barney Show and The Pebbles and Bamm-Bamm Show. Two live-action films were also released. Despite negative reviews, the 1994 film starring John Goodman was a huge box office hit, while The Flintstones in Viva Rock Vegas, which came out in 2000, absolutely bombed.

They were scary and enormous, but we're still fascinated with dinosaurs of all kinds. As a Spinosaurus model joins T. rex in a Berlin museum, we look at famous dinos you can visit and the hype surrounding the giants.

Masha and the Bear: a big cartoon hit

A cartoon series called Masha and the Bear is proving a great hit with kids the world over. You can see it online and on TV. One Masha Youtube video has been viewed over a billion times.

The indomitable Gauls Asterix und Obelix are off again on a new adventure. Volume 37 takes the two best friends into the lion's den - to ancient Italy, where their arch enemy Julius Caesar rules in Rome.

'Cartoons for Future' on show in Turkey

They began as supporting actors and conquered the world: 60 years ago Belgian cartoonist Peyo published the first Smurfs story. The little blue creatures are now found in comics, films, a TV series and as gummi candies.

A new malaria vaccine trial is kicking off in Burkina Faso, coffee can actually be good for you and a sequel to "The Flintstones" is finally underway. DW zooms in on happy stories from around the world.