One of Finland's most successful writers and illustrators, Tove Jansson introduced the world to the Moomin family in 1945 with the release of her first book, The Moomins and the Great Flood. Seven decades after they made their debut, the fairy tale creatures are more popular than ever.

A white hippo-like animal with a long rounded snout, the upright-walking Moomintroll and his mother, Moominmamma, are at the heart of the original children's story, a tale in which mother-and-son band together and set off on a scary adventure in search of a home. Along the way, they confront obstacles in the natural world — including a world-destroying flood as in Noah's day sets them off path — while encountering an odd assortment of characters.

Complete with a happy ending, the Moomins' first book might read like a children's fairy tale as fictional creatures stomp through a made-up world, yet Jansson's metaphor-laden narratives set the themes of loss and displacement alongside the security and comfort of family. The goofy-looking creatures neither overreact nor become overwhelmed by the obstacles in their way, always working together as a collective to overcome hindrances, real or imagined.

More sentimental than comic, the anthropomorphized Moomins are as relatable to little children as they are foreign. Their adventures in overcoming create the dreamy fiction of a happy society as a contrast to the real world. While there are things to be learned from the Moomins' exploits, the writer is neither heavy-handed nor moralizing — which is likely why the fantastic cartoon characters are still so appealing today. 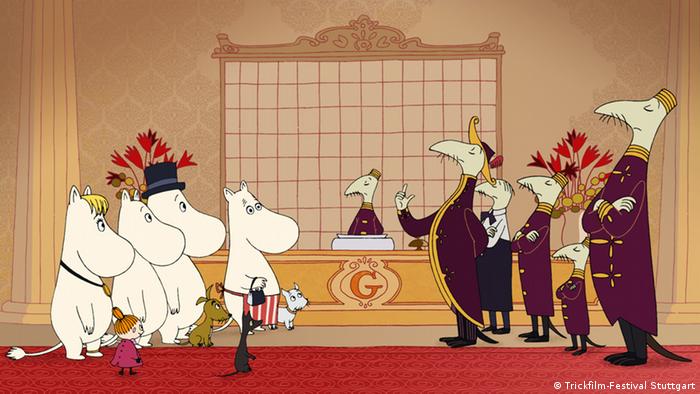 A still from 'Moomins on the Riviera'

Art for the times

"Every artist who depicts herself also depicts the times she lives in," writes scholar Boel Westin in the biography, Tove Jansson: Life, Art, Words, and that's especially true of Tove Jansson, the creator, illustrator and storyteller who captured the Moomins in a series of books and comic strips.

Jansson's life coincided with some of the most difficult events of the 20th century and that shows in the development of the Moomins characters.

Born in 1914, at the onset of World War I, Tove's childhood and early adulthood took place in a time of intense political upheaval. Artists themselves, her parents were a part of the Swedish-speaking minority in Finland and in those first few years, when the world was at war, Tove and her mother stayed in Stockholm while her father remained in Finland, going on to fight in the Finnish civil war in 1918. That experience, some literary analysts say, is reflected in the missing Moominpappa, who appears only as an allusion in the first chapters of the first book.

When the family reunited in the newly-independent nation, the artists set up their daily lives in a home that doubled as a studio; Jansson, you could say, was born with a paintbrush in her hand and she used it for most of her 86 years.

She wrote stories and sketched in her diaries throughout her teenage years, showing her artwork in an exhibition for the first time in 1933 at just 19. It was the start of a long and fruitful career that transcended borders. 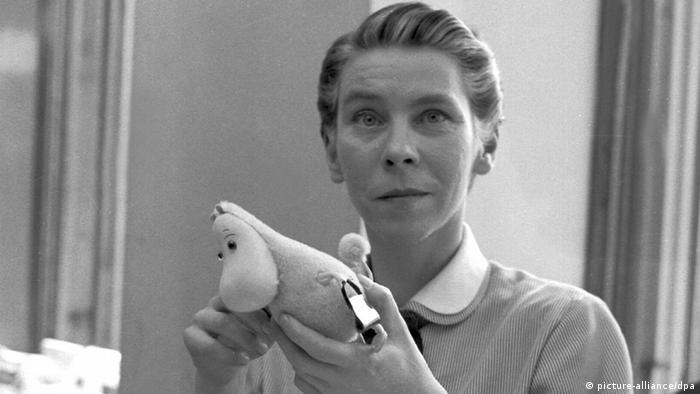 Tove Jansson with a Moomin figure, in 1956

War as anguish — and inspiration

Throughout the 1930s and beyond, Jansson made a living sketching for newspapers and advertisers but it is her contributions to the Swedish-language satire publication, Garm, that won her the most attention. Sharp as a sword, her pen captured the political mood of the day while taking aim at both international and internal Finnish politics in over 600 pictures.

In cartoons for Garm, she lampooned both Hitler and Stalin; the war that had taken over the continent and was impacting daily life for everyone in Helsinki bothered Jansson immensely and she dealt with her feelings toward the war's horrors through her artwork. "It's as if the whole world has become a lump of anguish," she wrote in her diaries in 1941. The creation of the Moomins stories became a means of dealing with this anguish she felt, offering an escape.

"It was the utterly hellish war years that made me, an artist, write fairy tales," she said after the publication of her second Moomins book, Comet in Moominland.

"Flight, catastrophe and homelessness are powerful themes that directly connect the two first stories with reality. The war left no immediate traces on her painting; no bombs, no ruins, no escapes," writes Westin her biography. "The story of the family in the valley was a realization of the idea 'of a happy society and a peaceful world,' a fiction sprung from the dreams of the war years and a longing for something else."

Released at the same time as Astrid Lindgren's Pippi Longstocking, the initial Moomins book had a small print run and sold very few copies. Yet the artist continued to create adventures for the troll family, working through the mental and emotional challenges of the post-war years in the narratives of their exploits. The third in the series, Finn Family Moomintroll, came out in 1948 and was the first to be translated into English and published in the UK.

Although Jansson continued to work on other art, including commercial works, she became best known for her Moomins after the troll family hit Britain, with a comic strip appearing in London's The Evening News starting in 1954. From there, the illustrator and writer's success grew, seemingly limitless in its expansion possibilities.

Beyond the nine Moomin books and three picture books produced by Jansson in her lifetime, the creatures have a special place in children's lives across Scandinavia — and in other parts of the world, too. 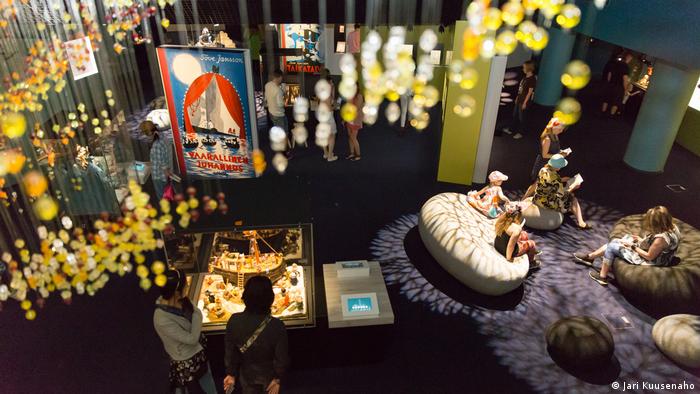 Her works, translated into 45 languages, have also been turned into television series and short films over the years. A new series which debuts in the UK on February 23, 2019, Moominvalley, features the voices of actors Rosamund Pike and Jennifer Saunders as it seeks to bring the fantasy world to a new generation of children.

Although the artist was actively involved in ensuring the commercial successes of her creations, the renaissance the Moomins are experiencing 18 years after the author's death might have more to do with the insecurities and anxieties of the ages than anything else.

Created in Finland and beloved the world over, the Moomins are an unusual cartoon family. Brought to life by illustrator Tove Jansson during World War II, the mythical creatures are a balm for kids and adults alike. (22.02.2019)