Dutch police have expelled a Turkish minister from the country after she was barred from addressing a rally in Rotterdam. The incident has seen relations between the two NATO-allies plunge to a new low. Erdogan supporters also gathered at the Netherlands' consulate in Istanbul, which was sealed off amid 'security concerns'

Turkish Family Affairs Minister Fatma Betul Sayan Kaya was escorted to the German border in the early hours of Sunday following a tense confrontation outside her country's consulate in Rotterdam.

Kaya had planned to hold a rally at the mission's compound in support of a referendum to expand the powers of Turkish President Recep Tayyip Erdogan. But when she got there, security officials prevented her from entering the building, leading to a long standoff between her ministerial convoy and local police lasting several hours .

"But nevertheless she decided to travel," he said. "She was called an unwanted foreigner by the government and the rules say you send someone back to the country she came from."

After entering Germany, Kaya flew back to Turkey from Cologne on Sunday morning.

The clash came less than a day after the Netherlands withdrew landing permission for a plane carrying Turkish Foreign Minister Mevlut Cavusoglu, who had also planned to campaign in the Dutch port city.

The move prompted a furious response from Ankara, with President Erdogan describing the Dutch government as "Nazi remnants." 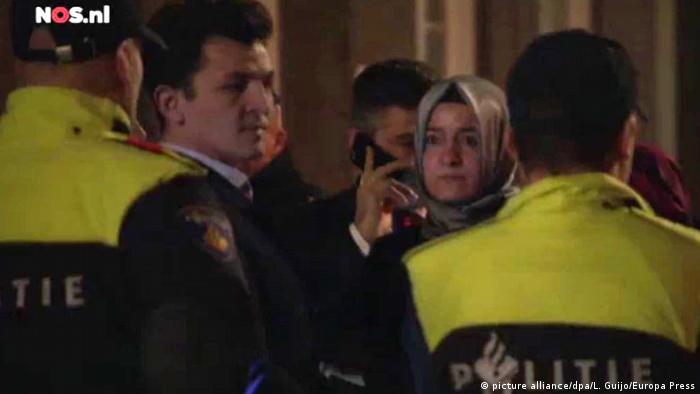 During the diplomatic standoff overnight, hundreds of pro-Turkey protesters gathered near the Turkish consulate, condemning the Netherlands' decision to bar Turkish ministers from addressing rallies there. At one stage, police used water cannon and charged on horseback to break up the demonstration.

Rotterdam Mayor Aboutaleb issued an emergency order, saying he needed special powers to assure security throughout the city center and to prevent riots from breaking out.

A crowd of around 300 demonstrators carrying Turkish flags also came to the Dutch embassy in Berlin early Sunday.

Ankara is seeking to harness the votes of Turkish nationals living abroad ahead of the April 16 referendum on creating an executive presidency. The Turkish government says the changes would make governance more efficient, but opponents are concerned they would lead to one-man rule.

The Dutch decision to ban Cavusoglu and Kaya from holding rallies came after Germany and other European nations also blocked similar campaign events.

"Our so-called European friends who speak of democracy, freedom of expression and human rights have failed their class," he said.

Turkey's Foreign Ministry also summoned the Dutch charge d'affaires and said it didn't want to see the Dutch ambassador for some time. Turkish officials also closed off the Dutch Embassy in Ankara and the consulate in Istanbul, citing security concerns.

Foreign Minister Cavusoglu, meanwhile, arrived in the French city of Metz ahead of a rally planned for later on Sunday.

French officials said the event has been authorized and was expected to go ahead unless it represents a threat to public order.

Rotterdam has joined a number of European cities blocking Turkish campaigning for a controversial referendum. Turkey's FM said Ankara would retaliate if his plane was denied entry to the Netherlands. (11.03.2017)