Israeli Prime Minister Benjamin Netanyahu has given a fiery speech at the Munich Security Conference, warning the world not to try to appease Iran. Iran's foreign minister called his presentation "a cartoonish circus." 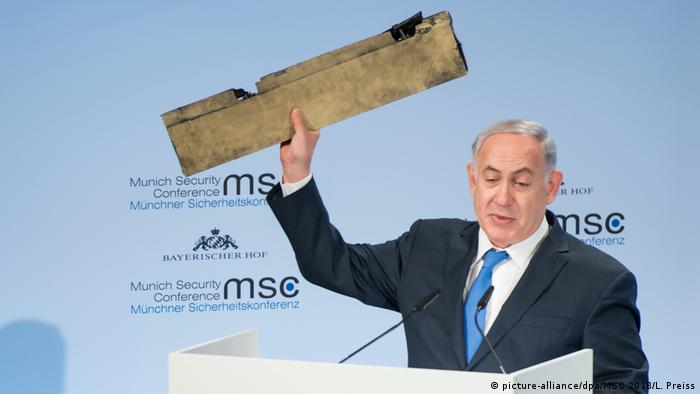 Israel's Netanyahu holding up a piece of a drone, allegedly from Iran

On Sunday, Israeli Prime Minister Netanyahu told delegates to the Munich Security Conference that immediate action should be taken to curb aggression from Iran in the Middle East, comparing the nuclear deal struck with the country with efforts to appease Germany's Adolf Hitler before the Second World War.

Although he conceded that Iran was not equivalent to Nazi Germany, Netanyahu said the world must take action now to stop the country from expanding its influence in the Middle East. He said that sanctions relief under the deal had only emboldened the country and "unleashed a dangerous Iranian tiger."

In response, Foreign Minister Mohammad Javad Zarif, who addressed the conference later, denied that Iran was seeking territorial expansion, saying the age of hegemonies was over.

Zarif also slammed the prime minister for presenting a "cartoonish circus" undeserving of response, in reference to Netanyahu's brandishing of what he claimed was a piece of an Iranian drone sent into Israeli airspace.

Should Iran acquire nuclear weapons, Netanyahu said, its aggression would "be unchecked."

When asked about the future of the nuclear deal, he said the main aim must be to prevent Iran from obtaining a nuclear arsenal and that if this were possible under the agreement, he was not opposed to it per se. But he called for inspections of Iranian military sites, a permanent ban on the country's uranium enrichment, and a stop to Iran's development of ballistic missiles.

In particular, Netanyahu spoke of Iran's intervention in the conflict in Syria, accusing Tehran of wanting to establish a "terror base" next to Israel.

Holding up a fragment of what he said was an Iranian drone, Netanyahu said he wanted to send a message to the Iranian regime to "not test Israel's resolve," adding that his country would not allow Iran to "put a noose of terror around our necks."

"We will act if necessary not just against Iran's proxies but against Iran itself," he said. However, he stressed that Israel had no quarrel with the Iranian people but with the regime in Tehran, and expressed condolences following the crash of an Iranian passenger plane that reportedly killed 66 people on Sunday.

In what was the most serious confrontation to date between Israel and Iranian-backed forces based across the border in Syria, an Israeli warplane was shot down by anti-aircraft fire on February 10 while returning from a bombing raid on Iran-backed positions in Syria, from where Israeli officials say the drone was launched.

Netanyahu said the one positive thing to come of Iran's aggression in the Middle East was that Israel had drawn closer to its Arab neighbors in response. He said the new partnerships could also be beneficial in finding a resolution to the long-running Israeli-Palestinian conflict. 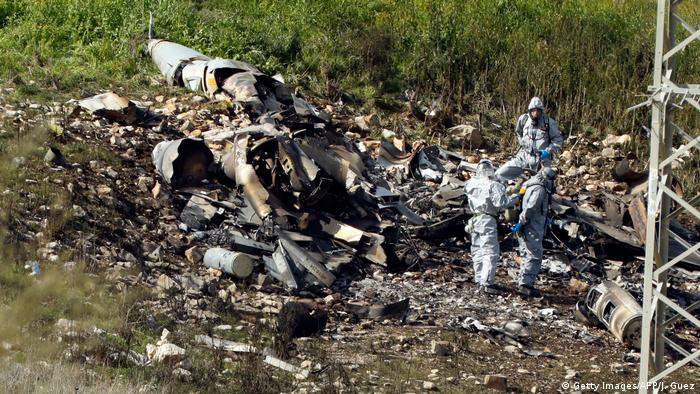 The shooting down of the Israeli warplane marked a dangerous escalation

Foreign Minister Zarif said Iran had often been blamed for wrong strategic choices made by others, citing the US's support for the Iraqi dictator Saddam Hussein, whom it later ousted, as one example.

He called for a "fresh security architecture" in the Persian Gulf that moved away from alliances toward a single strong region in which individual differences and interests were respected without "zero-sum" thinking, and urged an end to the "destructive and unnecessary rivalry" that had made the region insecure over the past few decades.

Zarif also accused Israel of using "aggression as a policy against its neighbors" and carrying out "daily incursions into Syria, Lebanon."

He described Netanyahu's speech as an attempt "to evade the issue," saying Israel's "so-called invincibility" had been shattered by the shooting down of the jet.

Tzipi Livni: "Two states for two people is in the Israeli interest"

US is committed to Middle East peace, says Rex Tillerson

US Secretary of State Rex Tillerson met with Syria's opposition members in Jordan. He called on Iran to withdraw its military from the Syrian conflict. (14.02.2018)