Nepal: Students fear loss of academic year due to COVID-19

As months pass, officials have still failed to come up with solutions to resume classes and exams. Students now face an uncertain future, with girls from low-income households facing the highest risk of dropout. 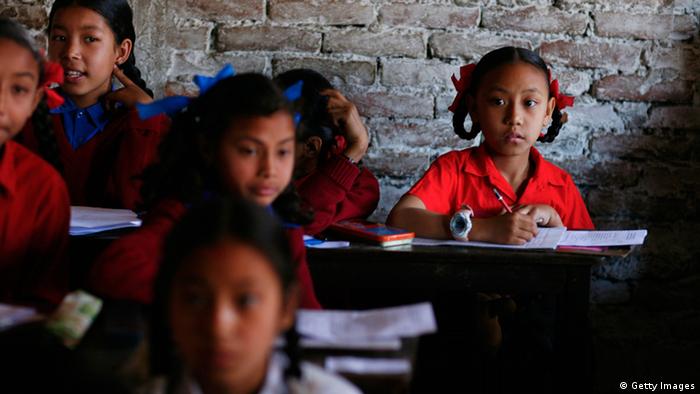 Arjit Lohani, like millions of other Nepali students, has waited over five months for classes and exams to resume. If everything had gone as planned, the 19-year-old would now be preparing for his university entrance exam. But after the Nepalese government suspended all classes and exams due to the coronavirus pandemic until further notice, all Lohani can do is wait.

"If things go like this for a few more months, our entire academic year will be lost," Lohani told DW, adding that he was considering a bachelor in computer technology either in Nepal or in Australia.

"My entire plan has collapsed. I cannot even think what I am going to do," he lamented.

Roshni Gurung, 22, shared similar fears. "Even if the situation turns normal within a few months, we need to have quite some time to prepare for the examinations," she told DW.

Nepal has registered over 27, 240 coronavirus infections so far with 107 deaths and 17,495 recoveries. The country's daily new infection rate surpassed 500 in recent weeks, but health experts suggest that this figure could rise sharply if more tests are carried out.

According to Nepal's education ministry, at least 8.5 million students are enrolled in primary schools or higher education. Authorities are struggling to come up with plans on how the students can continue their education amid the global pandemic.

"We will start teaching courses to the students without final exams," TU Rector Shiva Lal Bhusal told DW. "We will provide them with their due exams in the first year that the situation becomes safe and favorable," he said.

Education authorities, however, are still lost on how to handle students in their final year of studies, and students still cannot enroll in new studies or institutes.

Former Vice Chairman of Tribhuvan University, Kedar Bhakta Mathema, warned that an entire academic year will be lost if authorities fail to step up efforts and reopen education institutes in some form.

"The pandemic has exposed our lack of crisis preparedness and the fragility of our education system," he told DW. "If things go like this, an entire academic year would collapse."

Professor Susan Acharya suggested Nepalese schools adopt alternative teaching methods. "We need to conduct online classes and then student's performance and assignments can be done from home," she told DW.

In Nepal, students typically take exams in groups at examination halls. Students can be expected to sit written tests for up to three or four hours for each subject.

Professor Bidya Nath Koirala said exams and classes can instead be taken using digital platforms like Zoom, Microsoft Teams, and Google Class. He added that students without internet access can sign up for distance learning via Television and FM radios.

A number of schools and colleges, mostly privately-run, attempted to switch to online classes in late May. However, many of them halted efforts after the government instructed schools not to charge fees for online classes, and ordered them not to enroll new students amid the pandemic.

Some schools ignored the government instruction and continue to charge online classes with the same fees while others now provide partial online classes or distance learning options.

The increase in demand for online learning options has also exposed Nepal's digital gap between private and public schools.

Unlike their private counterparts, state-run schools and colleges are not sufficiently equipped to run online learning platforms, further entrenching the divide between Nepal's haves and have nots.

Almost 80% of students in Nepal are enrolled in public schools or colleges, according to the education ministry.

For Koirala, state officials are simply using the lack of digital infrastructure as an excuse not to launch online or distance learning options.

"We can understand that all students don't have access to the internet and Wi-Fi. But they must have at least a television or radio at their disposal," he said.

Acharya warned that girls from low-income or marginalized households may not even return to school following the pandemic, adding that the chances of girls dropping out rises as the period of time without class increases.

"Such cases [dropouts] could increase in Tarai and remote villages, where the dropout rate of girl students is quite high," she said, adding that although the rate of enrolment of girls in primary schools is higher than boys, their dropout ratio is significantly higher.