Nepal: Political tug-of-war hampers efforts to tackle COVID | Asia| An in-depth look at news from across the continent | DW | 13.05.2021

With Nepal's second wave pushing deaths and infections to a record high, critics say Nepal's top leadership has largely ignored the health crisis, and has instead placed its primary focus on reforming the government. 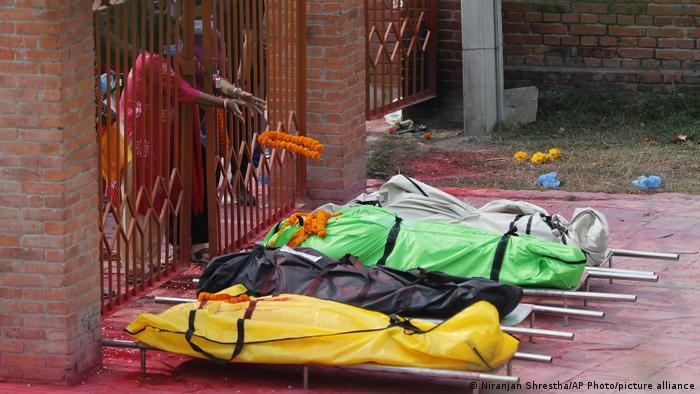 Amid a fatal second wave of the pandemic, with a spiraling number of new cases and deaths, Nepali leadership has been consumed with power struggles rather than coming up with effective plans to deal with the unfolding public health disaster.

In the country of about 29 million, more than 834 people have died and almost 50,000 have tested positive for COVID-19 within just five days.

Meanwhile, the Ministry of Health and Populations on Thursday said that at least 8,960 new cases and 214 deaths were recorded within the past 24 hours. It's a trajectory that gives cause for concern.

Critics say the Himalayan nation's top political leaders have been preoccupied with reforming the government. "We have been going through a tough time over the last two weeks. In the meantime, the prime minister has not been seen at many public events. He has not given much attention to the fatal second wave of the pandemic," Gagan Thapa, a former health minister and opposition parliamentarian, told DW.

He said the government is too busy covering up Prime Minister K.P. Sharma Oli's poor management of the pandemic, rather than working actively to upgrade the health care system and improve access to medical and oxygen supplies.

On Monday, Oli sought a vote of confidence from the 275-seat House of Representatives, but failed to secure enough votes.

He secured just 93 votes, while 28 parliamentarians of his own ruling CPN-UML party didn't vote for him and remained absent. Oli had earlier garnered majority support of more than two-thirds when he was sworn in as prime minister in February 2018.

Oli had dissolved the House of Representatives in December 2020, but it was reinstated by the Supreme Court in February, which said the move was unconstitutional.

After Oli lost the confidence motion, President Bidhya Devi Bhandari called on political parties to come up with a proposal to form a majority coalition government of two or more parties, within three days.

The leadership of all four political parties represented in the House — the leading Communist Party of Nepal (Unified Marxist-Leninist), the Communist Party-affiliated Maoist Centre, the socialist Janata Samajwadi Party (JSP) and Nepal Workers' and Peasants' Party (NWPP) — were busy in internal meetings and intra-party discussions as to whether or not to keep the Oli government intact.

Oli 'could have postponed'

Pokhrel said that if the deadline to form a majority coalition government was missed, there would be a high chance of holding an early election within the next six months.

Former Health Minister Thapa said the prime minister failed to gauge the gravity of the unfolding public health situation, and was busy disseminating false and misleading information about the coronavirus.

Just a few months earlier, the prime minister had claimed that the coronavirus was like a normal flu, and could be wiped out by drinking and gargling herbs like turmeric and guava tree bark.

But while addressing the parliament, Oli defended his government's handling of the pandemic and accused the opposition party of failing to recognize the achievements made by his government.

Critics say, however, that Oli has been preoccupied with planning rallies and political meetings. Since the dissolution of the House in December, hundreds of political rallies have been organized by both the ruling and opposition parties.

Most of the largest rallies were led and addressed by the prime minister himself.

As late as the last week of April, while the second wave of the pandemic surged in the region, Oli was working on improvements to Kathmandu's iconic Dharahara Tower, with the presence of thousands of supporters.

Meanwhile, most public hospitals were issuing notices that they were becoming overwhelmed with the new number of critical cases, and that they couldn't take in new patients in the absence of oxygen support, beds, ICUs and ventilators.

Additionally, Nepal's pioneering COVID hospital, the Sukraraj Tropical and Infectious Disease Hospital, has stopped conducting polymerase chain reaction (PCR) tests for the virus until further notice, due to a lack of supplies.

Shatosh Paudel, head of the National Trauma Center in Kathmandu, wrote a Facebook post calling for swift management and an increase in access to oxygen supplies.

In his post, Paudel said that many patients' lives could have been saved if they had been treated on time. He added that the situation could spiral further out of control if medical supplies and oxygen were not immediately made available.

On Wednesday, another major health institution, the Bhaktapur Hospital, started having patients sign contracts that the hospital wouldn't be held responsible for their death in the absence of a sufficient supply of oxygen.

Samir Bohara from the northwestern city of Nepalgunj — a COVID-19 hotspot along the Nepal-India border — told DW that people have also started dying due to a lack of drinking water at hospitals and isolation centers.

"Hospital beds are filled up. Patients are kept in corridors and open yards and left to wait for check-ups, in temperatures of over 35 degrees Celsius [95 degrees Fahrenheit]," said Bohara.

"They do not have enough drinking water, let alone medical oxygen and access to immediate treatment," he said.

He added that even though some remote hospitals have a few ventilators on standby, those ventilators are useless due to a lack of staff qualified to operate the machines.

Jageshwor Gautam, spokesperson for the Ministry of Health and Population, told DW that the government was doing its best to manage the situation. He said the country is importing oxygen cylinders and ventilators from China, some of which have already arrived.

He further stated that the government has extended lockdown measures in major cities and COVID-19 hotspots, including the capital city Kathmandu, for the next 15 days.

Earlier this week, the government had directed large private hospitals to install oxygen plants within the next 15 days. In response, the chairman of the Association of the Private Health Institutions of Nepal, Basanta Chaudhary, said the plan could not be sufficiently carried out within such a short span of time.