COVID: Nepal reeling from a deadly second coronavirus wave | Asia | An in-depth look at news from across the continent | DW | 07.05.2021

Hospitals in the Himalayan nation are overflowing with coronavirus patients and there aren't enough beds, essential medicines and health equipment. 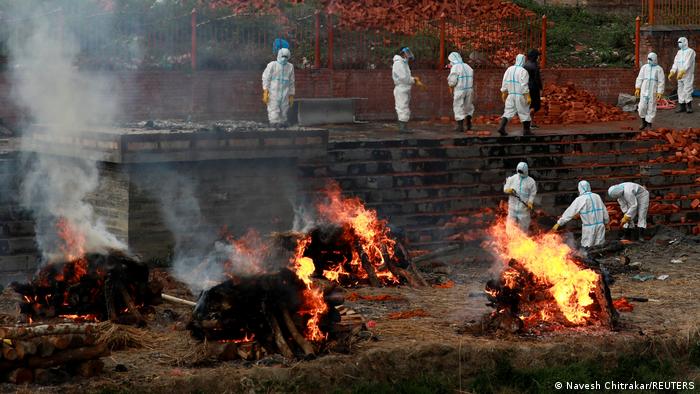 Ram Babu Shah, a communications expert at a UN agency in Kathmandu, was recently in a desperate search for a hospital bed for his coronavirus-infected brother. He finally found a bed at a local hospital in Nepal's capital, Kathmandu, but had to pay exorbitant rates.

"There are two types of problems facing the COVID patients and their families: One, it's really hard to get a hospital bed if one is critically ill. Second, even if you get a bed, it is so expensive," Shah wrote in a Facebook post.

Shah said he was paying 35,000 Nepali rupees (€245, $295) per night for the hospital bed alone in a mid-range private hospital. That price didn't cover costs for treatment and medicine.

"Even if you are lucky enough to have a hospital bed, you may lose your life not being able to afford its cost," he told DW.

Nepal has been facing a new wave of the coronavirus over the past few weeks, causing a sudden spike in the number of new infections and deaths.

The country is now recording 57 times as many cases as a month ago and the positivity rate — the percentage of people tested who are found to have the disease — is about 45%, up from around 25% two weeks ago.

On Thursday, health officials recorded at least 9,070 new cases and 54 deaths. It's the highest single-day infection count since the onset of the pandemic, according to the Health Ministry.

The rapid rise in infections has put an enormous burden on an already strained and dilapidated health infrastructure.

Health Ministry spokesperson Jageshwor Gautam told DW the entire health system has been overwhelmed due to the spiraling case numbers. "The situation is becoming precarious day by day. It may go out of control soon if we don't follow safety protocols," Gautam warned.

He appealed to people to remain in home isolation if they test positive for COVID-19 and to visit hospitals only in emergency situations.

Many hospitals in the Himalayan nation are overflowing with COVID-19 patients and there aren't enough beds, essential medicines and health equipment.

There's also a severe shortage of medical oxygen, which is a critical resource for the treatment of COVID-19 patients. To overcome the shortage, Gautam said, Nepal is trying to import oxygen cylinders from China through a government-to-government agreement.

Nepal has only 1,595 ICU beds and 480 ventilators for its almost 30 million people, according to an official COVID response plan officials came up with in May 2020. The country has only 0.7 doctors per 100,000, according to the report.

Local media reports suggest that a number of people have already lost their lives because of not being able to get medical help in time.

Towns and villages near the Indian border have been hit particularly hard by the health emergency, with the number of people needing medical treatment rapidly rising.

Even the crematoriums are overwhelmed, turning the management of dead bodies into a huge challenge for authorities.

The Nepali army has been tasked with cremating or burying the bodies of COVID-19 victims. And soldiers have been cremating the dead on the banks of the Bagmati River in Kathmandu after the Pashupatinath Electrical Crematorium couldn't deal with the influx of bodies.

Nepal's new wave is linked to what is happening in neighboring India, which has been battling its own deadly coronavirus second wave in recent weeks. 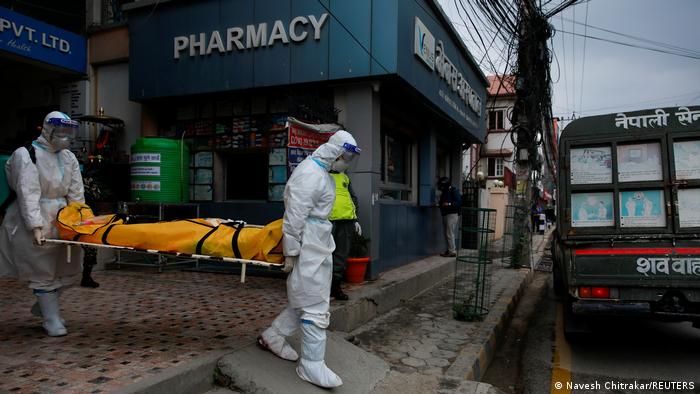 A major contributing factor to the sudden spike in cases in Nepal is the Kumbh Mela — a Hindu pilgrimage to the Ganges River in India that drew millions throughout April.

Over 50,000 Nepali pilgrims participated in the event, according to local media reports.

Nepal's former King Gyanendra, 73, and former Queen Komal, 70, also tested positive for the coronavirus just after their return from a week-long trip to the Kumbha Mela in late April. They are still being treated at a hospital in Kathmandu.

To contain the spread of the virus, the Nepali government has imposed a number of restrictions on public movement and gatherings in many cities. Authorities have closed the border with India and canceled all domestic and international flights. They have also temporarily closed all night clubs and gyms.

Still, it's common to see people flout rules in rural areas as well as at wedding ceremonies, religious events and political rallies.

"The situation with the second wave of COVID is very deadly and alarming," Azmat Ulla, head of the International Federation of Red Cross and Red Crescent Societies in Nepal, told DW. "If we do not do anything quickly to get the situation under control, it could be on par with the situation in India." 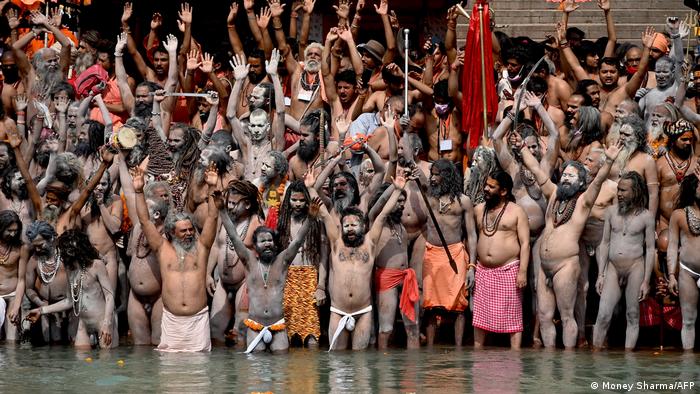 Over 50,000 Nepali pilgrims also participated in the Kumbh Mela event, according to local media reports

About 438,000 people in Nepal have received both shots of the COVID vaccine so far, accounting for just over 1% of the population. Authorities have mostly used the Oxford-AstraZeneca shot, made in India by the vaccine maker, the Serum Institute of India.

But the vaccination drive has been affected by India's recent decision to stop exporting vaccines and to use them domestically instead. This has created shortages in Nepal, leaving many who have gotten their first shot unable to get their second dose.

Gautam, the Health Ministry spokesperson, said Nepal has now also approached China and Russia for the vaccines but has not yet reached an agreement with either of the countries.

Coronavirus victims in Nepal say they have been a target of harassment in public and on social media. Rights organizations say the government has not done enough to create public awareness about the disease.

Coronavirus in Nepal a double threat for disabled people

Experts say that people with disabilities in Nepal require special care and attention during the COVID-19 pandemic. A lack of adequate facilities makes them vulnerable to the virus. Lekhanath Pandey reports.