Necks for sex: How giraffes evolved to feed and breed | Science | In-depth reporting on science and technology | DW | 03.06.2022

Necks for sex: How giraffes evolved to feed and breed

Giraffes are known for their long necks that allow them to feed on tall trees. But their necks may have evolved due to sexual combat, not the need to feed. 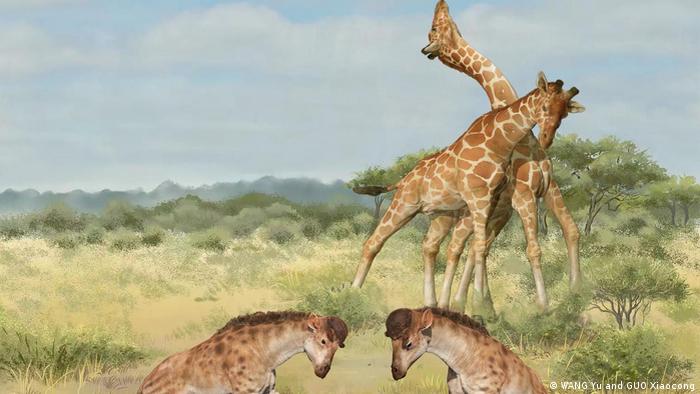 "Necking" in the savannah: Scientists think today's giraffes (two in the background) evolved from an ancient predecessor, Discokeryx xiezhi (here in the foreground)

Throughout history, we have tried to explain how giraffes evolved — not least because of their long, beautiful necks.

The British naturalist Charles Darwin used the giraffe's neck as an example of evolution and natural selection. Darwin said the animal's neck had grown in length over millions of years, allowing it to reach for higher tree branches as sources of food.

But more recently scientists have proposed a different theory that suggests the giraffe's neck grew through intensive sexual combat.

The "necks-for-sex" theory argues that "necking" combat was a form of sexual competition between males.

Now, a new study published in Science suggests there is more compelling evidence that those fierce battles among early giraffes may have created a selection pressure to develop more extreme types of neck.

How did the giraffe get its neck?

Scientists found this new evidence while studying fossils of an ancient creature called Discokeryx xiezhi. The species is considered to be an early version of the giraffe that lived about 16.9 million years ago in open savannah, much like giraffes do today.

The scientists found the D. xiezhi had an unusual head-neck morphology, or shape, with a thick-boned helmet on top of the cranium and extremely thickened cervical vertebrae.

D. xiezhi is also known as a giraffoid. It is said to have the most complicated head-neck joints in mammals known to date. 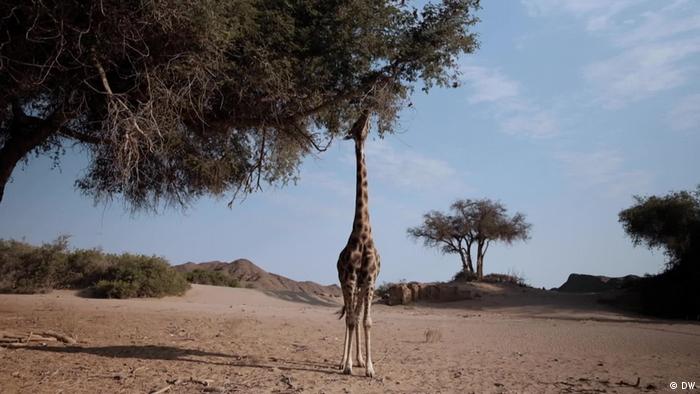 A giraffe's long, strong neck: For feeding and breeding

Its bone structure was highly specialized for high-speed, head-to-head butting, a possible form of sexual competition between males.

Males with stronger, longer necks beat weaker rivals and were able to mate with females, thereby passing on their genes to drive a selection process.

Over thousands of generations of breeding, spanning about 11 million years, giraffe necks gradually elongated, according to the science.

Head-butting through the generations

Head butting is still a common type of aggressive behavior among animals, particularly mammals such as deer, sheep, stags and bison. It is used in mating contests and to fight off predators.

All those head collisions can lead to severe injuries over time — as they would in humans.

But that wasn't the case for D. xiezhi. The researchers suggest that the species had a uniquely sturdy head and neck anatomy for withstanding necking.

They estimate that D. xiezhi's head could withstand huge collision forces in a fraction of a second with almost no strain on the brain. The strength of the skull may have reduced the risk of concussions and other brain injuries.

And the researchers suggest that despite their overt, gentle beauty, modern-day giraffes engage in fierce necking battles, like their apparent predecessor, D. xiezhi.

Model organisms are more than just monkeys and mice