Model organisms are more than just monkeys and mice 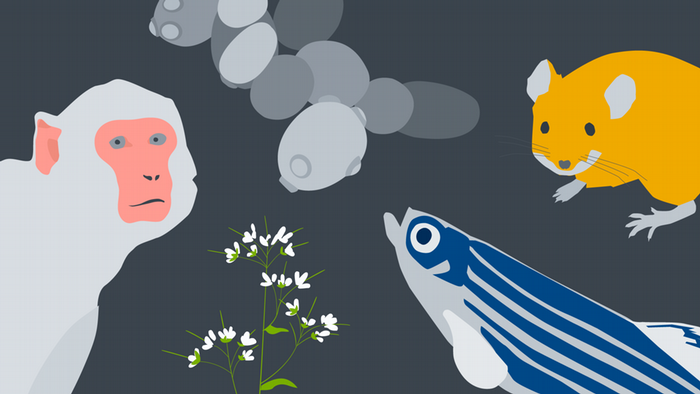 Model organisms — or research organisms, as they are also known — are living things that scientists, such as biologists, use to study human and other animal or plant life.

A model organism can be anything from single-celled bacteria to viruses and fungi. They can be more complex organisms, such as monkeys, mice, rats, frogs, elephants and a salamander called axolotl.

Monkeys and mice are considered incredibly important for the study of human disease and ageing, because they are genetically so similar to humans. And research on primates and rodents has led to some major scientific breakthroughs. 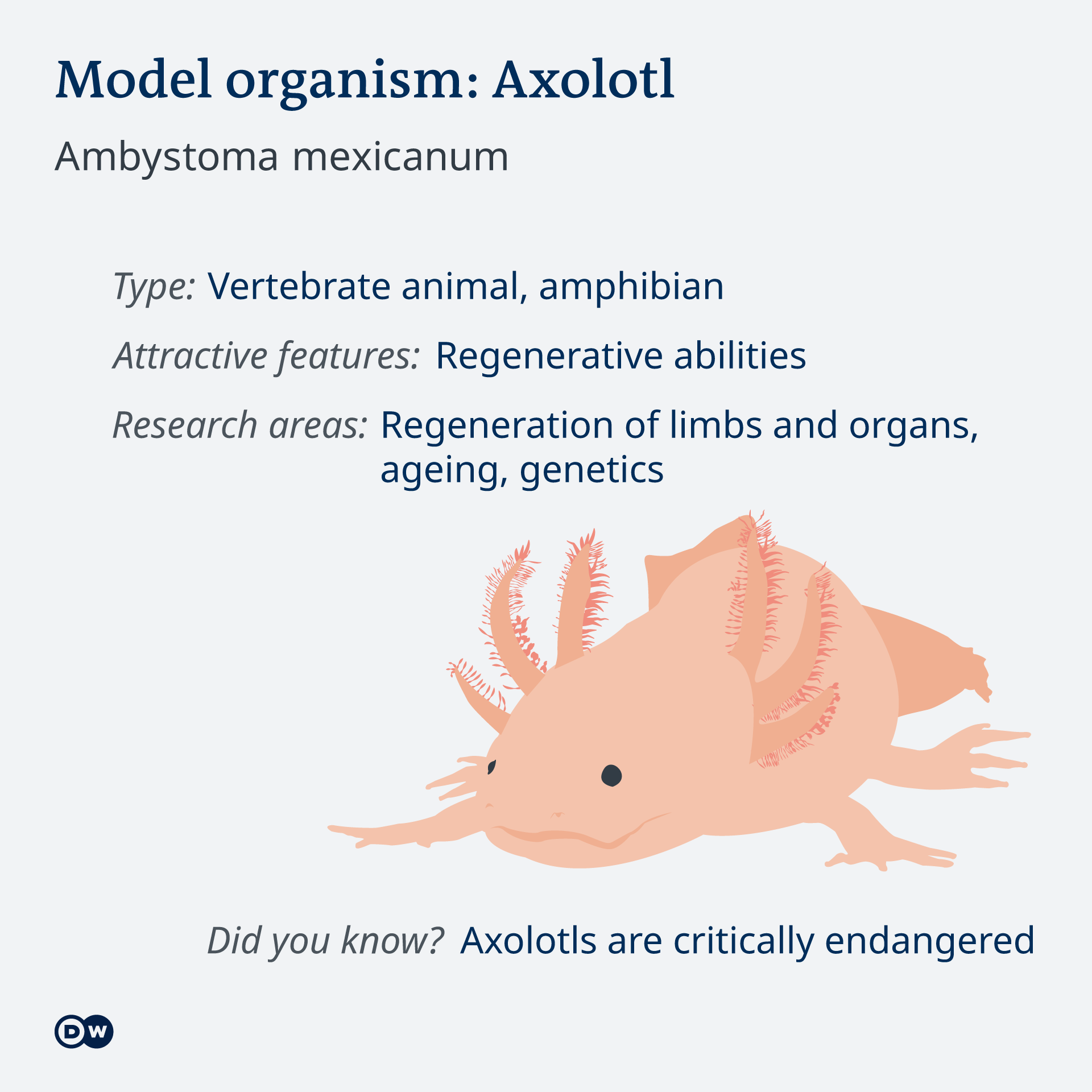 Illustration by Per Sander

The field is not without its opponents, though, and — let's not mince our words — its downsides.

One of the most basic scientific and ethical questions asks whether it's okay to subject non-human animals to experimental pain in a laboratory when we wouldn't do that with humans.

Think of vaccines and other medicines: Before they get tested on people, they are tested on non-human animals to look for dangerous side-effects.

Even further down the track, in human clinical trials, people can have extreme and adverse reactions to a drug in development. And that's when the drug has been somewhat refined to limit negative outcomes. 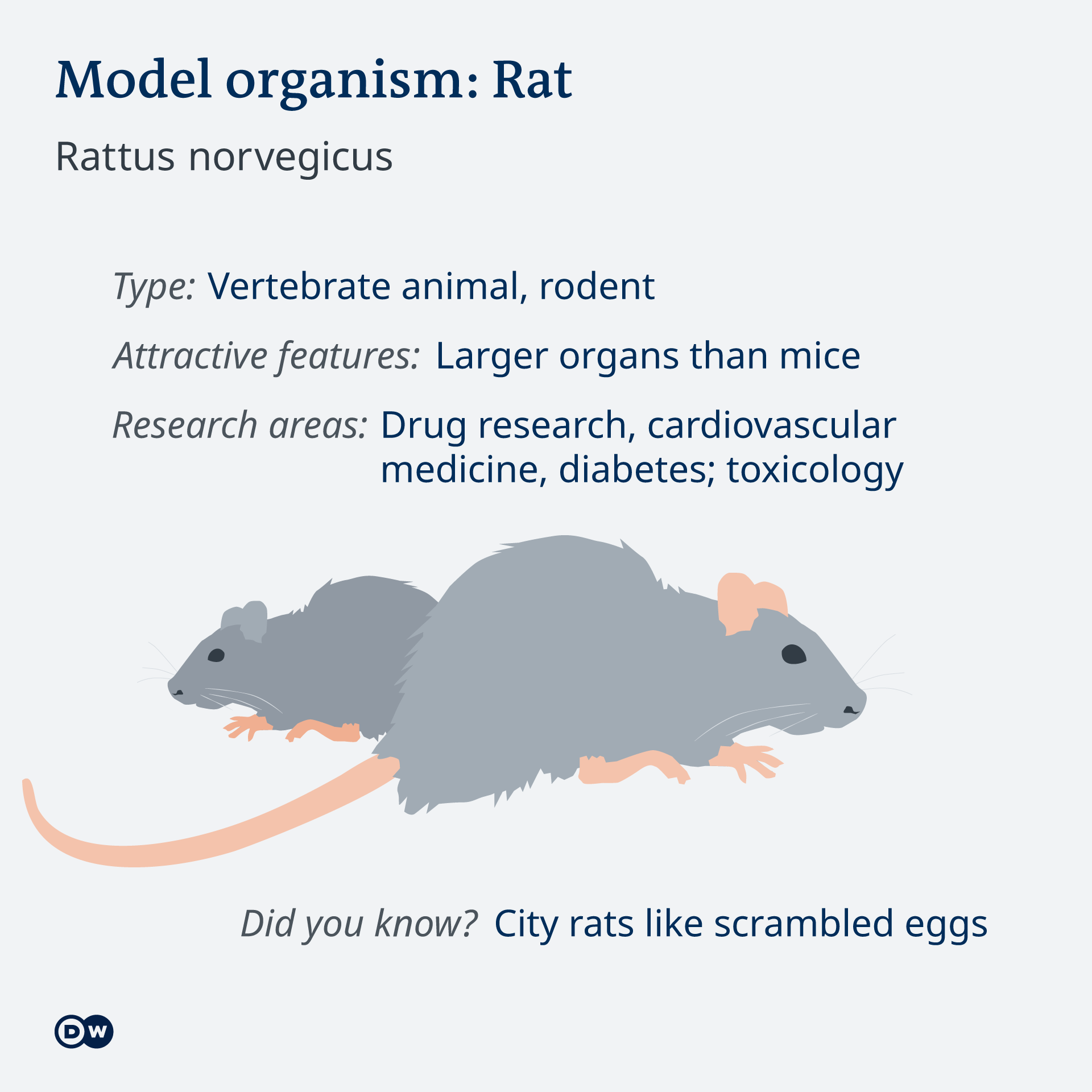 But with monkeys and rats, is it okay to just go ahead and test potentially lethal chemicals? Or what of psychological trials, like studying pain stimuli on mice? Is that okay? Does that mean that a monkey's life is worth less than a human life?

There are regulations to ensure the welfare of animals in research and, increasingly, some technical alternatives, such as computing models that use artificial intelligence and machine learning systems.

They can calculate what may happen if you put a medicinal compound in a body. But you can't avoid testing medicines on animals, including humans, in the end. How else would you know whether there are any benefits for human life? 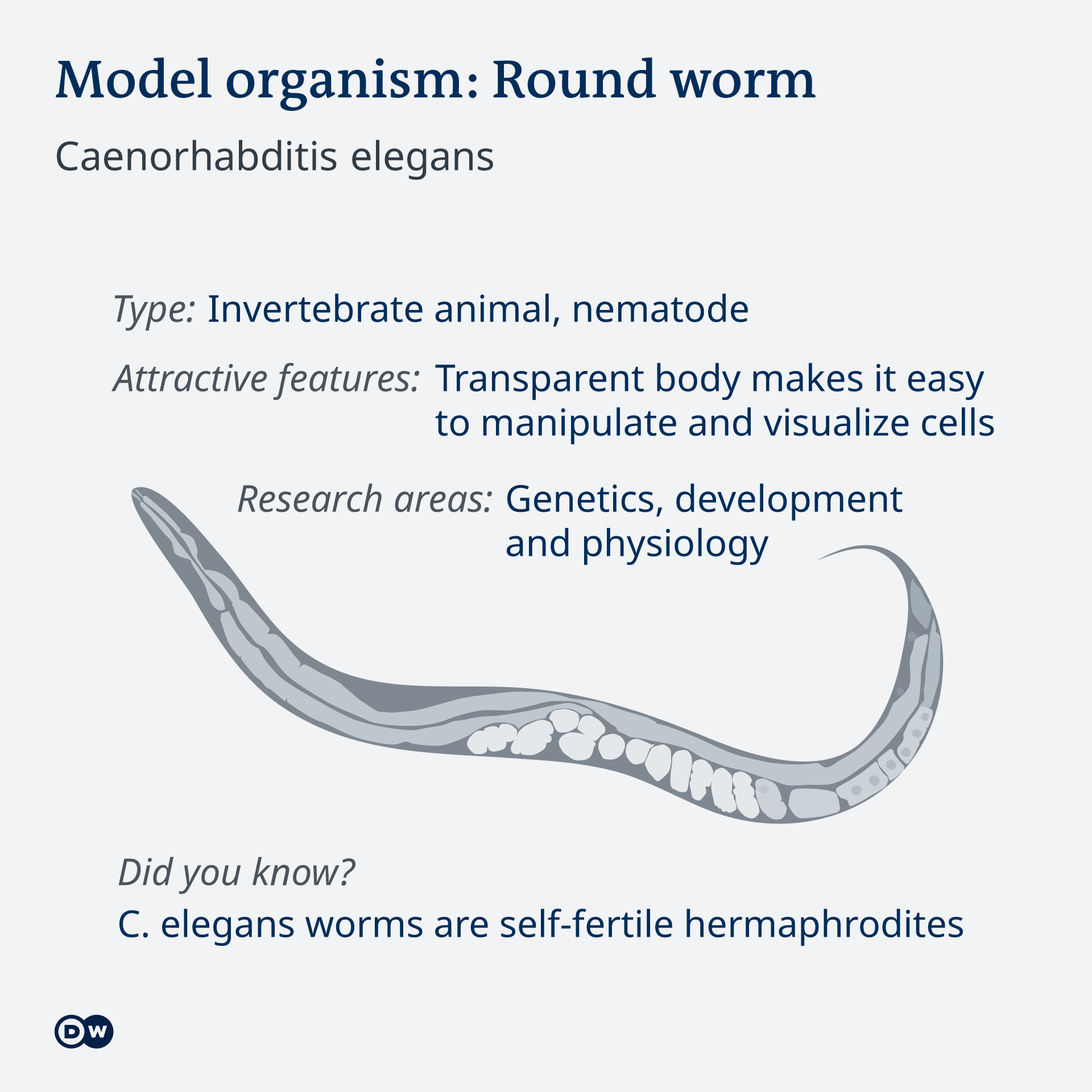 There are less controversial model organisms than monkeys — unexpected yet common things such as tomatoes, fruit flies, worms, and other vegetation. The axolotl is especially interesting because it keeps it's tadpole-like juvenile characteristics into adulthood. This includes external gills. But it is not a fish, it's a salamander.

One such plant is even celebrating the 200th anniversary of its naming, or to be precise, its renaming, and that's Arabidopsis thaliana.

A Swiss botanist called A.P. de Candolle coined the term Arabidopsis to describe a group of Brassicaceae plants in the mustard family in 1821.

In a paper published in the Journal of Plant Biochemistry and Biotechnology, Rajnish Khana and Ulrich Kutschera explain how a German botanist, Friedrich Laibach, then "established the mustard plant A. thaliana (L.) Heynh as a model organism in plant genetics […]."

It has since become integral to stem cell research and is still delivering insights. 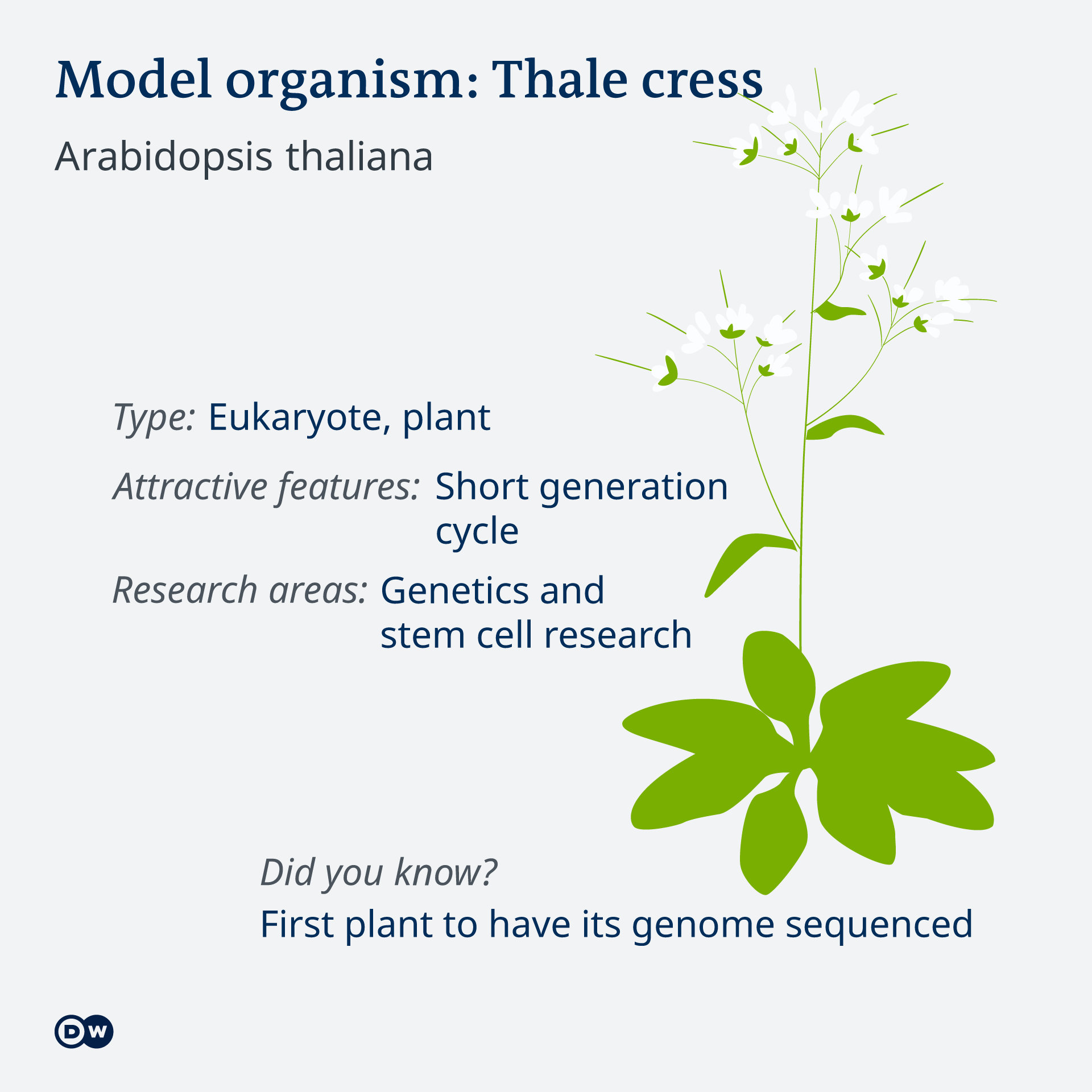 Khana and Kutschera write that A. thaliana is an ideal model organism for some very basic reasons: it's small and easy to grow, it has a short generation time — the average time from the birth of one living thing to the birth of its offspring — it produces up to 10,000 seeds per plant, and it's easy to manipulate and mutate.

Model organisms are categorized into various groups. The categories start with viruses, such as Phage lambda and the Tobacco mosaic virus. 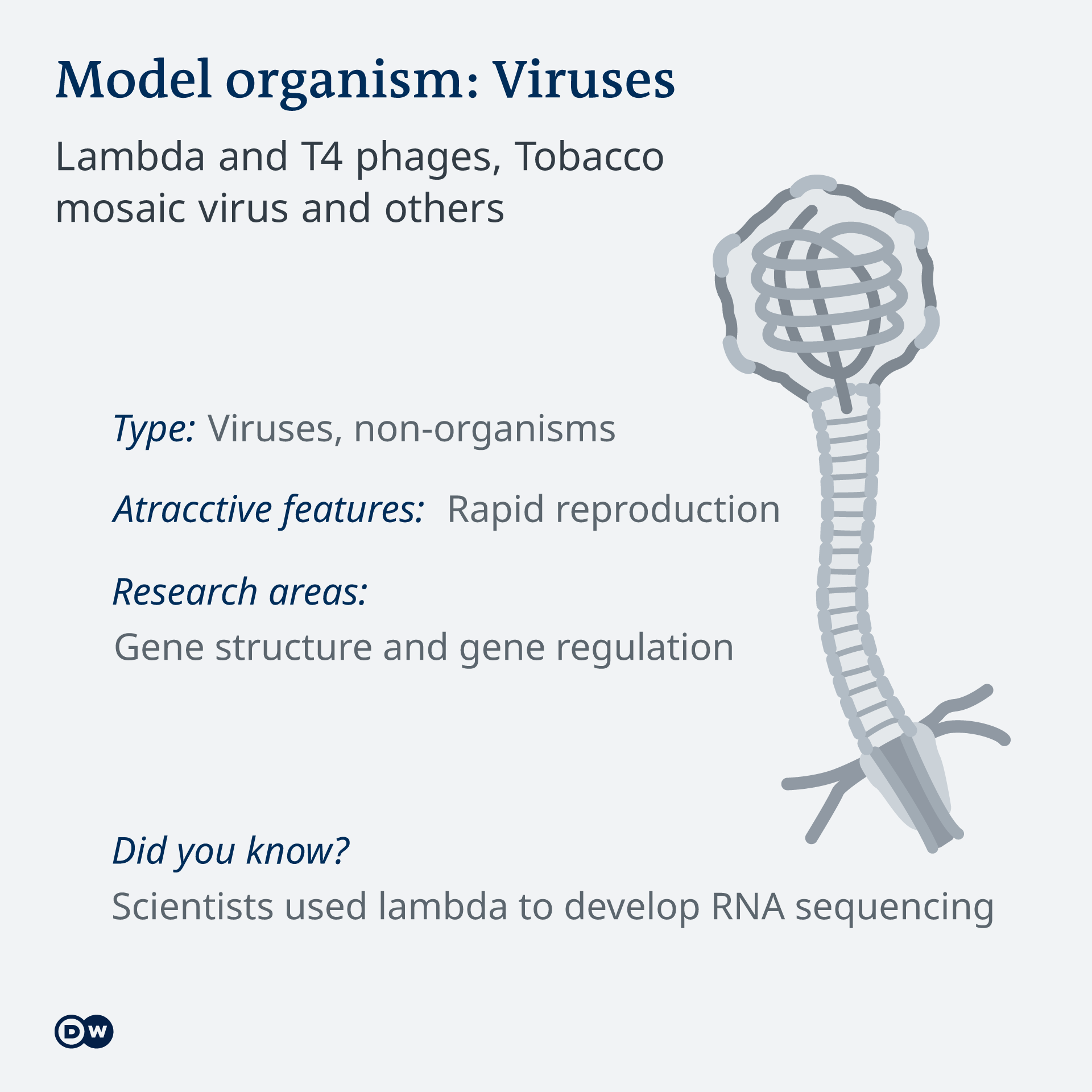 The Lambda phage, for instance, is what's known as a temperate virus, which infects host bacteria, such as E.coli.

Being temperate, Phage lambda has different ways of infecting a cell, but it has to decide which it wants to use. And it's that decision-making process — at such a fundamental level of life — that has intrigued scientists. Studying the process allows them to learn about our own biological development.

Some researchers say it's important to continue studying viruses on the brink of global eradication, such as polio.

Even viruses such as Ebola, Zika and influenza can be used as model organisms to teach us about genetic and hereditary processes in RNA, the messengers of DNA — the thing that makes living things unique individuals.

The next category is Prokaryotes. A prokaryote is any organism that lacks a distinct nucleus, the thing that controls the activity of a cell. 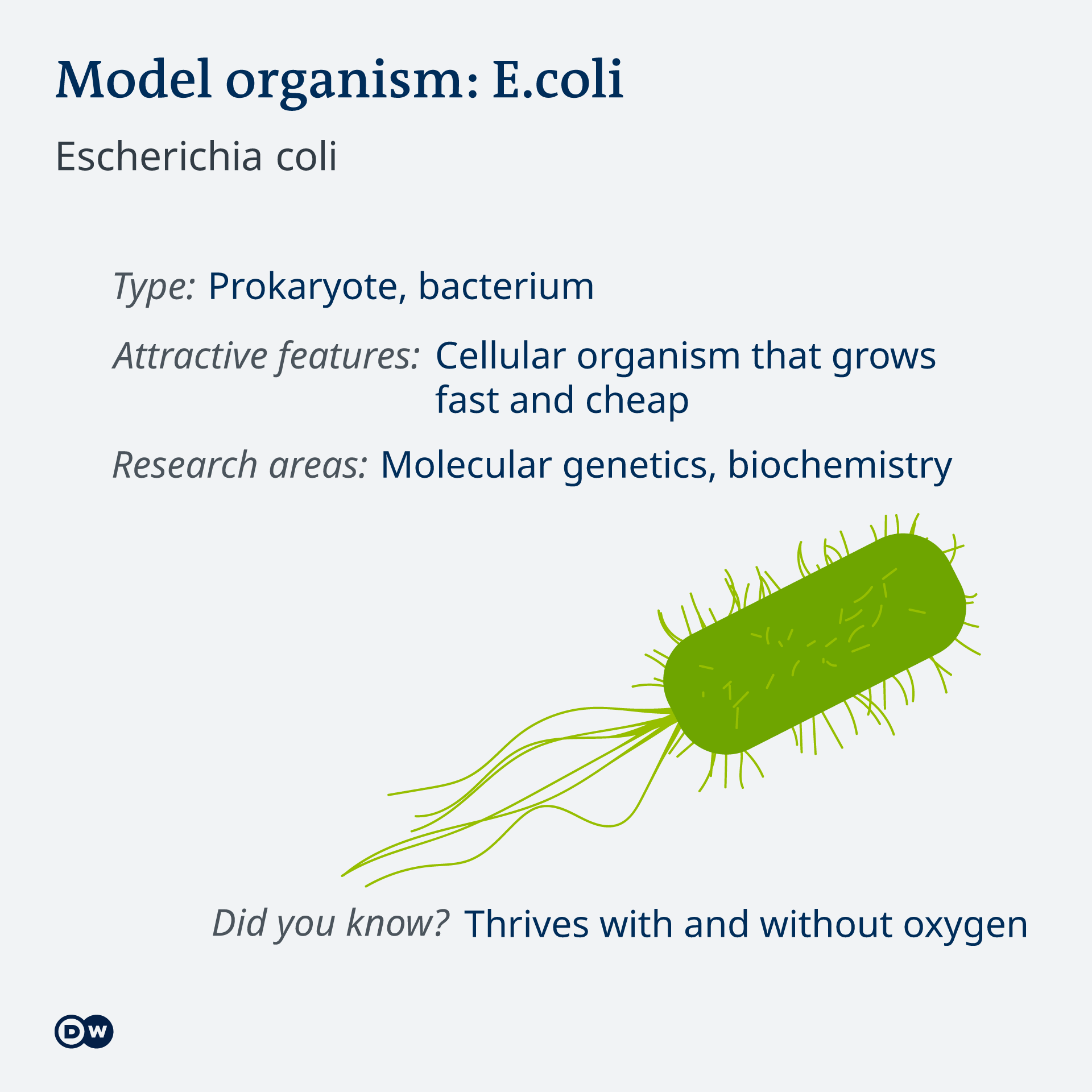 The most common prokaryotes are bacteria, such as E.coli (Escherichia coli), which is used to study molecular genetics. Synechocystis is a bacterium that is commonly used to research photosynthesis.

Next on the list — and arguably the largest and best-known group — involves eukaryotes. Eukaryotes are cells or organisms that are thought to have evolved about 2 billion years ago.

Compared to prokaryotes, eukaryotes have a clearly defined nucleus.

They include protists. Protists are often but not exclusively microscopic, single-celled organisms. 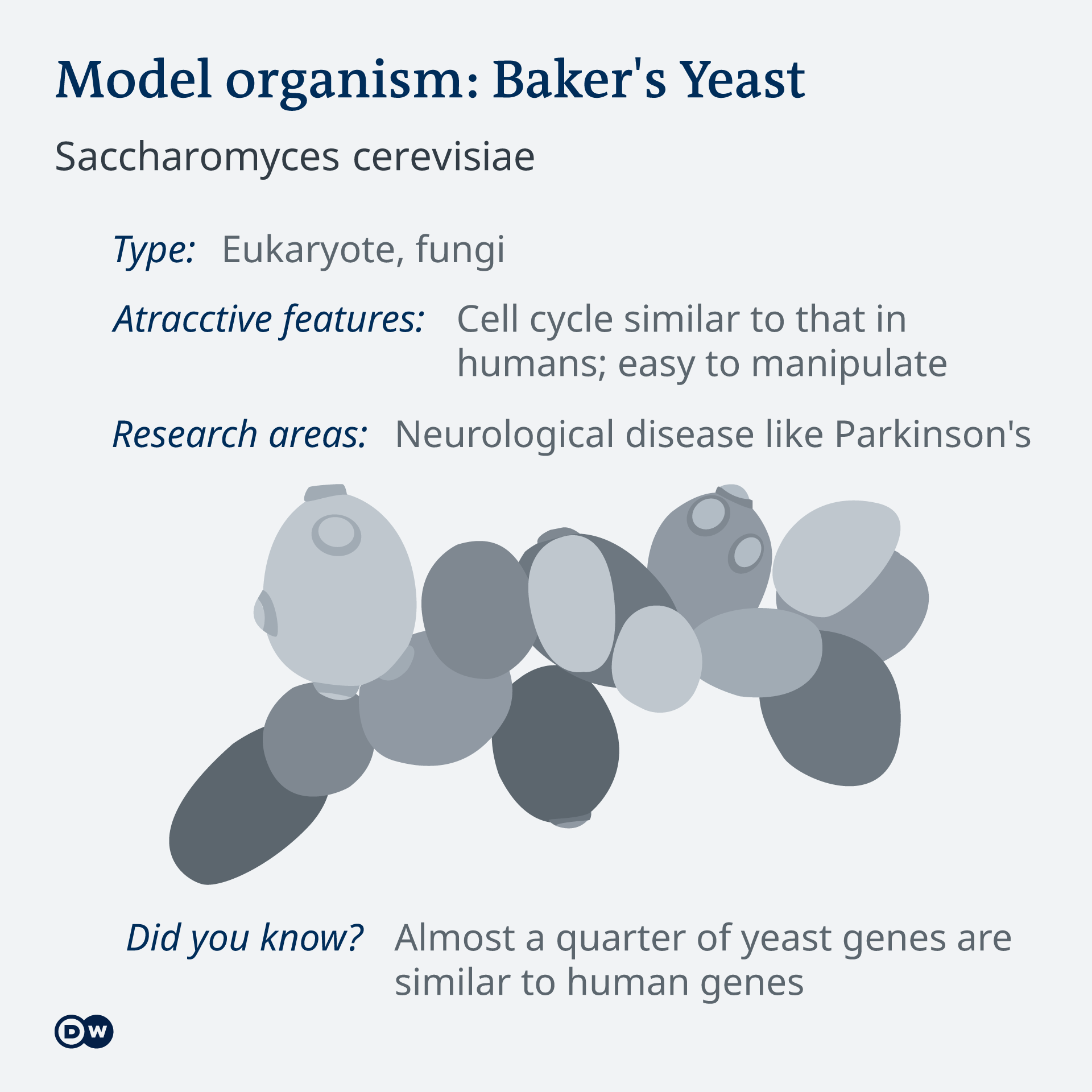 Eukaryotes also include fungi. There's Neurospora crassa, an orange bread mold, for instance, that's been used to study metabolic regulation and the circadian rhythm — the latter being a field that won a Nobel Prize only a few years ago.

Baker's yeast is used in genetic research, as are Coprinus cinereus mushrooms. They have been useful in the study of meiosis, or cell-division, which is important for understanding reproduction.

Arabidopsis thaliana, mentioned above, is also a eukaryote. It belongs to a group of so-called higher plants. 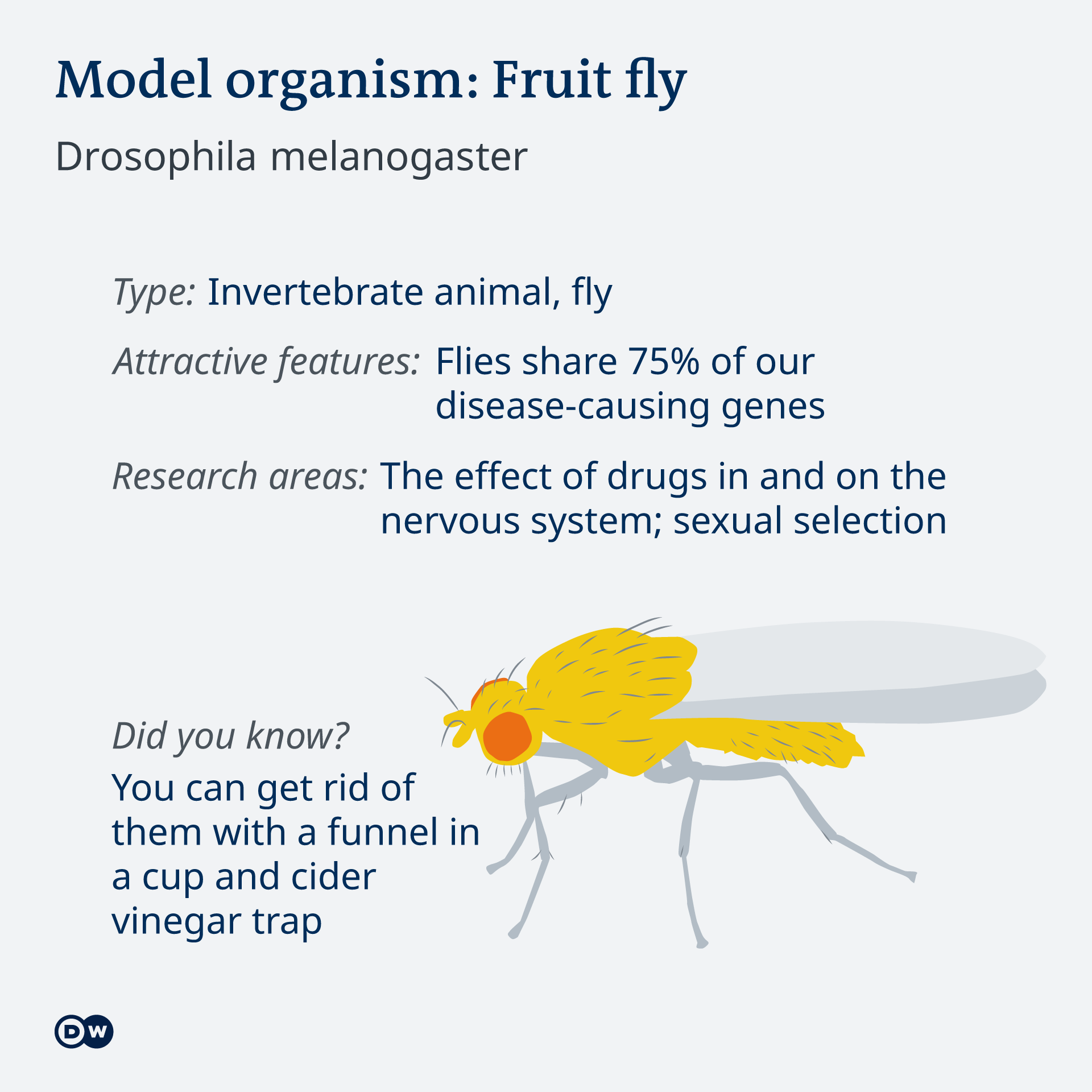 Then there are animals, both invertebrate and vertebrate.

Spineless but not useless

Let's start with invertebrate animals. The US National Wildlife Federation describes invertebrates as the "most diverse and numerous group of animals on Earth."

Invertebrates have no spine. They can live on land or in water. 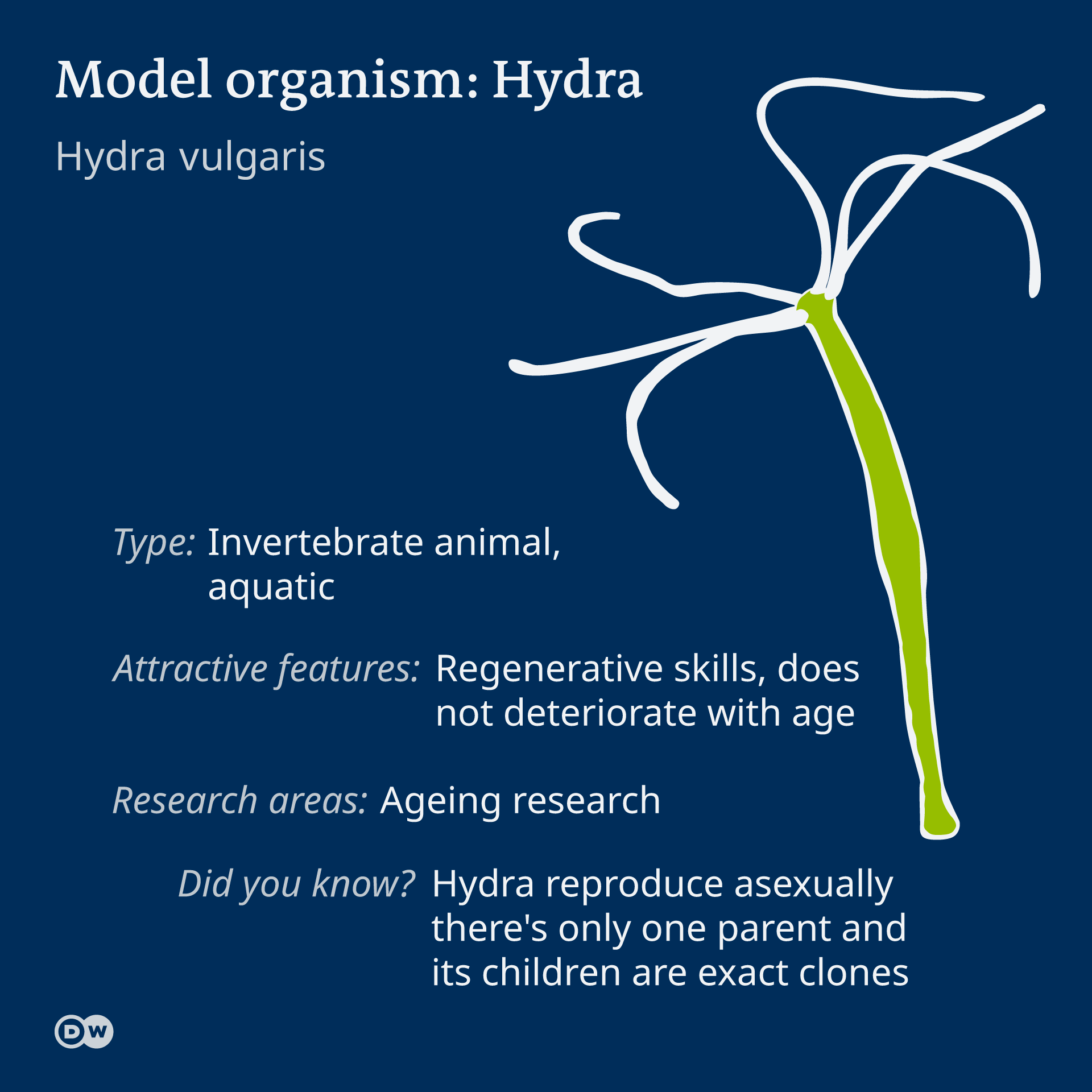 So, they include animals such as the common fruit fly and hydra, an aquatic animal.

Many have been used in molecular biology or biomedical experiments.

And last, but by no means least, we have the vertebrates — arguably, the most controversial group of model organisms.

Vertebrates are defined by their having a spine. 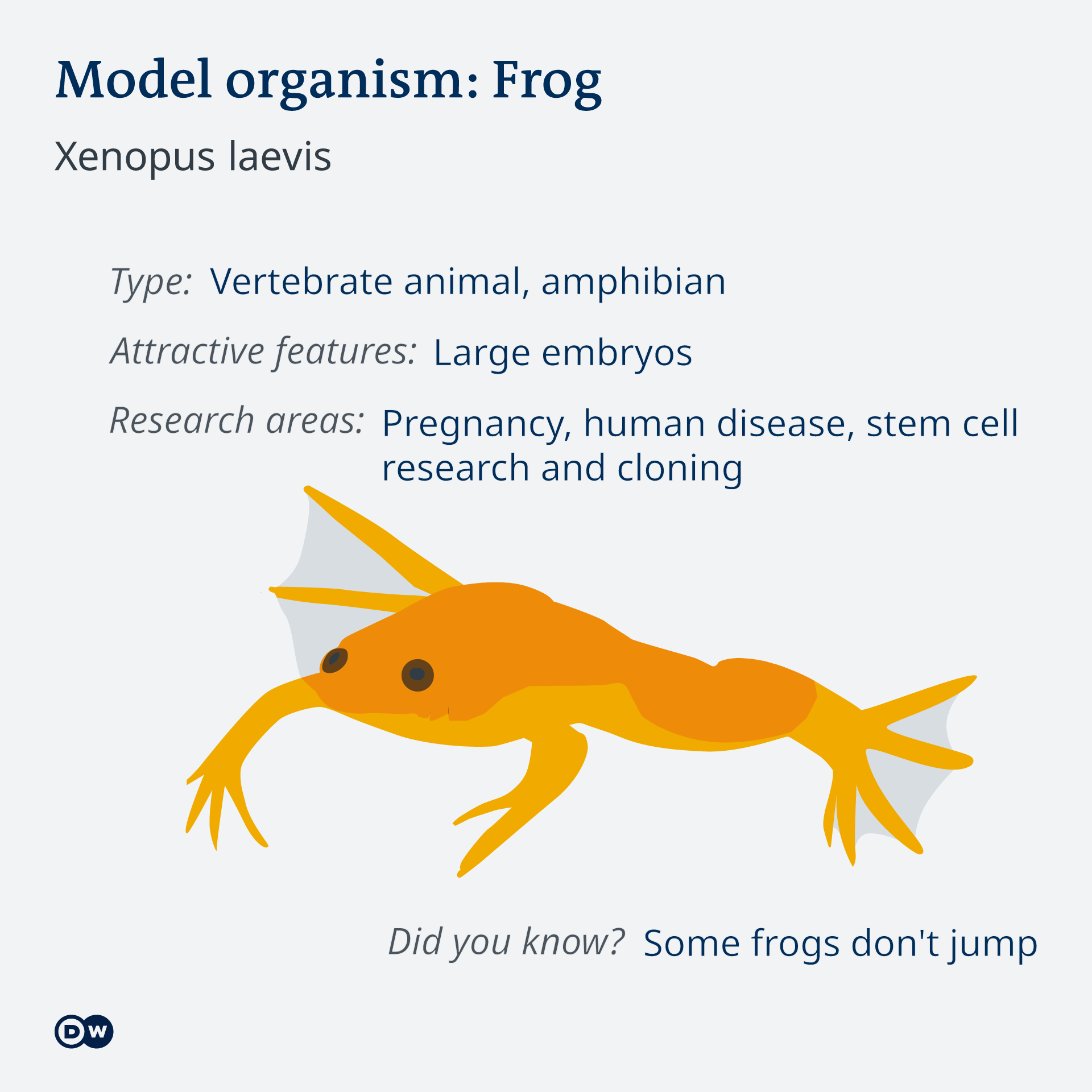 Now, if you wanted to be cynical, you may like to suggest that some vertebrates have more of a spine than others. We humans, for instance, could be accused of being spineless for willingly subjecting other animals to pain that we would rather not endure ourselves. But that argument is up for grabs.

The usual suspects among the vertebrate model organisms are the aforementioned monkeys, rats and mice. But they also include dogs, frogs, chickens and cats, and birds used to study communication among songbirds and non-mammalian auditory systems.

Then there's the beautiful zebrafish, a freshwater tropical specimen.

Zebrafish are virtually transparent. That offers scientists with an almost unique view of an animal's internal anatomy. 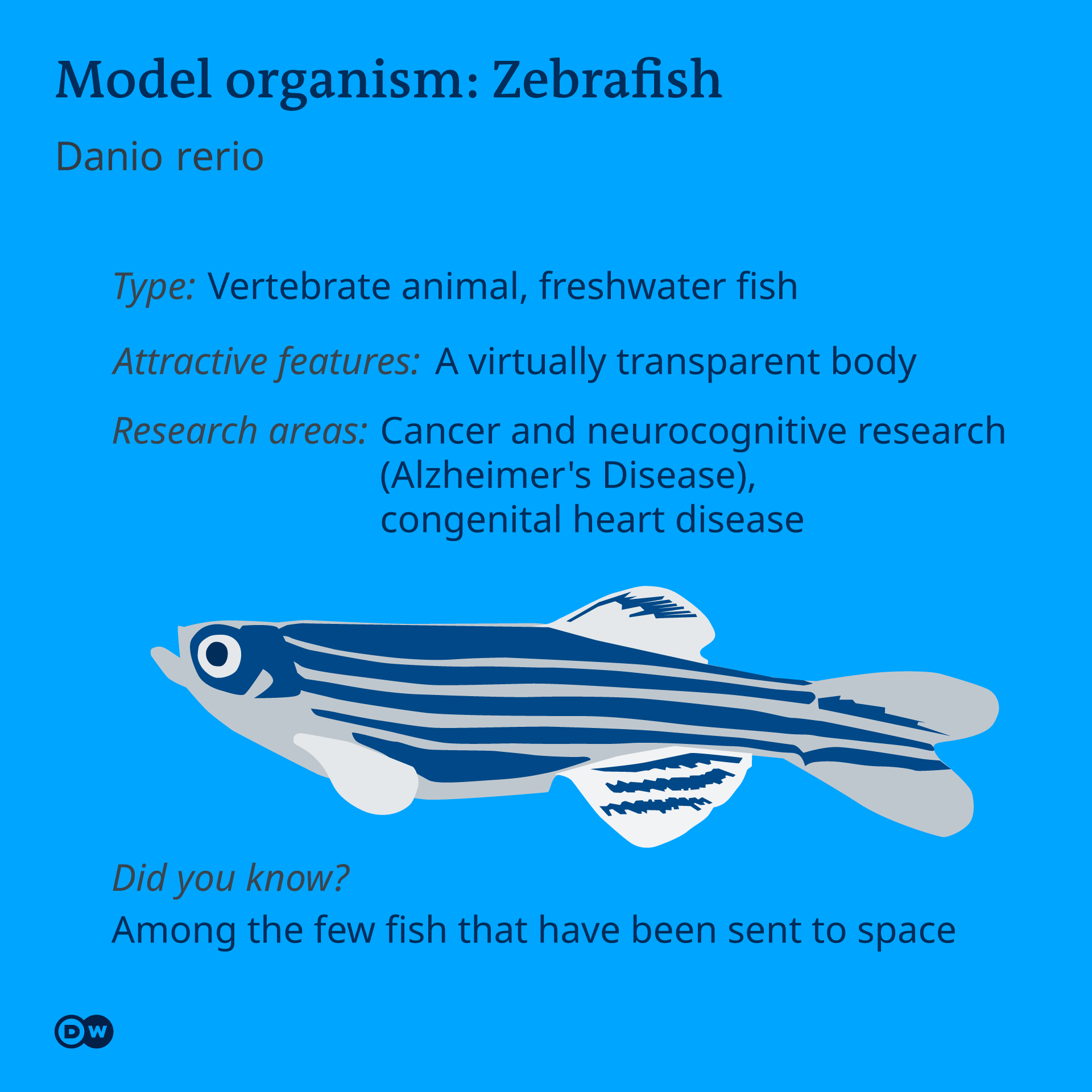 But if that's not cool enough, Zebrafish are becoming more and more attractive as a model organism because about 70% of their genes are similar to human genes.

Researchers says it's therefore possible to use zebrafish to model and study genetic changes, which in humans would lead to disease.

Of mice and monkey men

That's also one reason why some researchers say zebrafish are becoming more popular in the lab than mice. 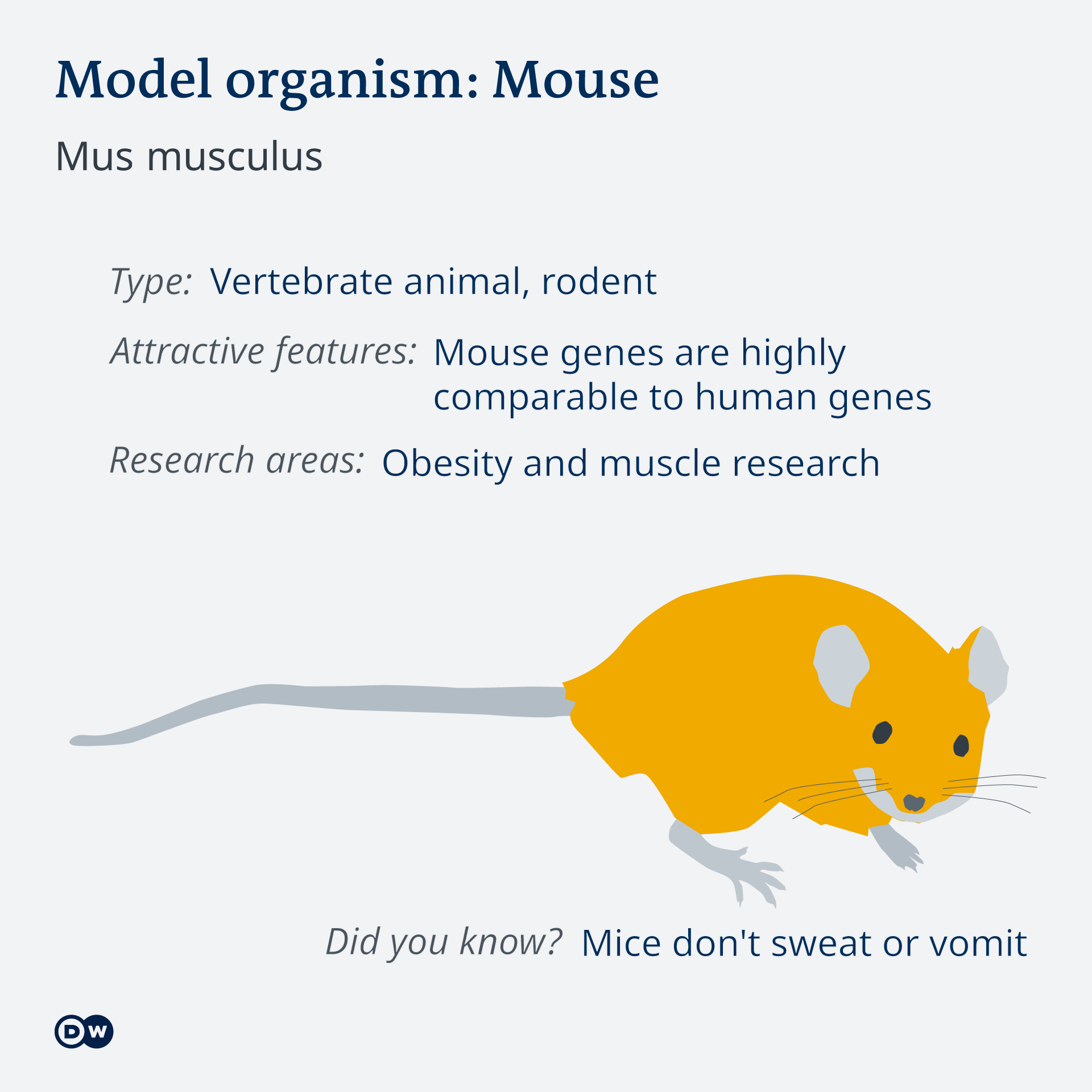 Mice are not to be discounted, however. German scientists recently reported that they had cured mice of paralysis after the animals had suffered a spinal cord injury.

But the use of animals, especially those so genetically close to humans, with all the scientific benefits for human life, remains contentious for both scientists and observers of research that uses mammalian model organisms.

Germany's Max-Planck Society writes that "monkeys are used in animal research only if a particular phenomenon cannot be studied on any other species of animal, such as mice, fish or fruit flies. […] They are used primarily for the final drug safety tests on new medicines before they are used on humans."

That is one perspective. Elsewhere, scientists are moving from mice to monkeys. 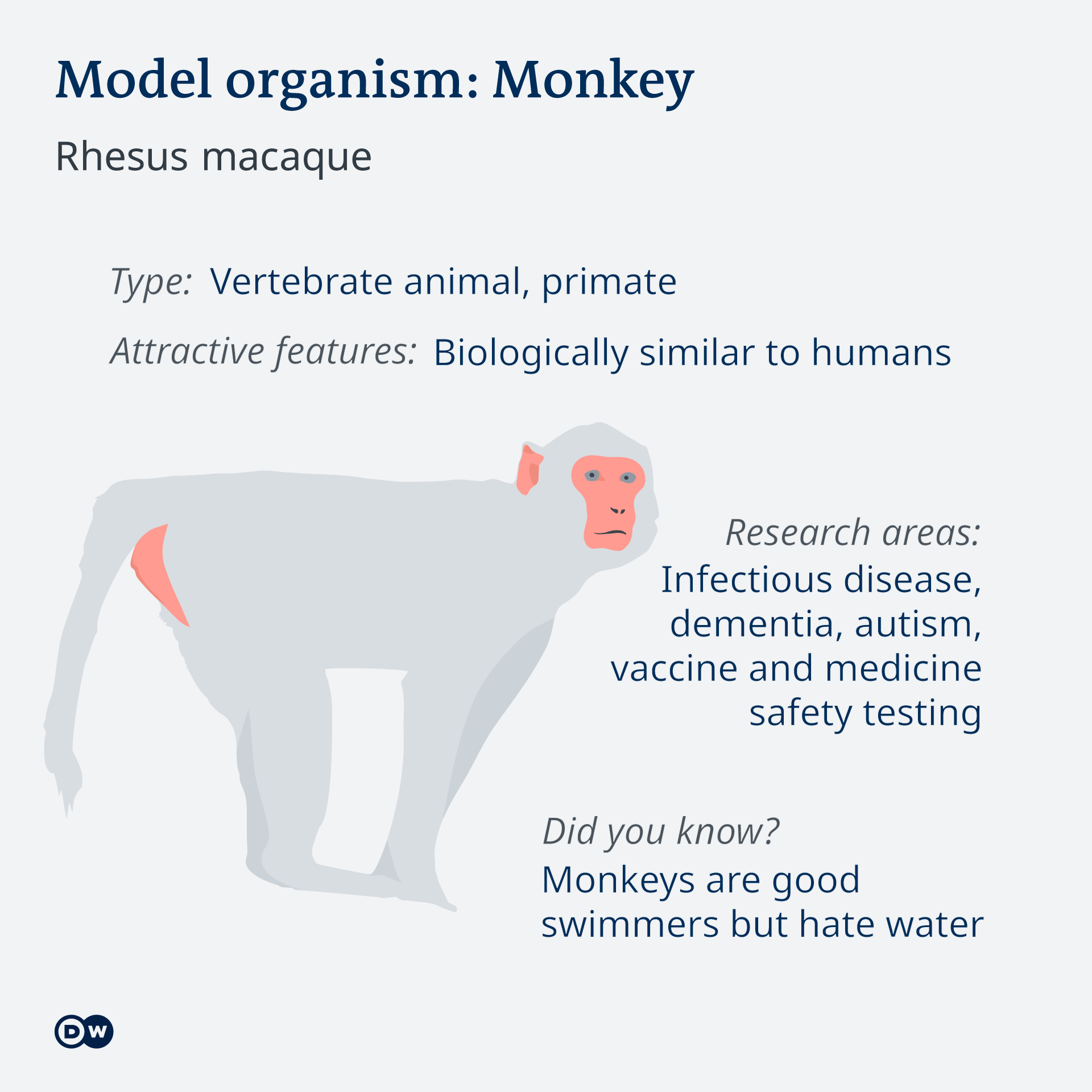 A feature article in Nature has suggested that cynomolgus macaque monkeys (also known as long-tailed or crab-eating macaques) may be the focus of a "new era of animal models for autism and other brain and psychiatric diseases."

Macaques are already among the most commonly used non-human primates in biomedical research.

The RSPCA, an animal welfare charity in the UK, says primates are "highly intelligent animals […] that suffer in similar ways to us."

It goes on to say that "the capture of wild primates for use in breeding colonies and for experiments in some countries causes very significant suffering — we believe this is completely unacceptable."I

Australia's animal research: the good, the bad and the ugly animals

Is animal research blind? No. Australia dedicates far more of its scientific time, money and effort to "good" animals (and to the invasive ones) than to the "ugly" natives that are quietly going extinct.