Researchers from the US space agency and the tech giant have taught a computer to review massive amounts of Kepler Telescope star data. The discovery puts a distant solar system's planetary count on par with our own. 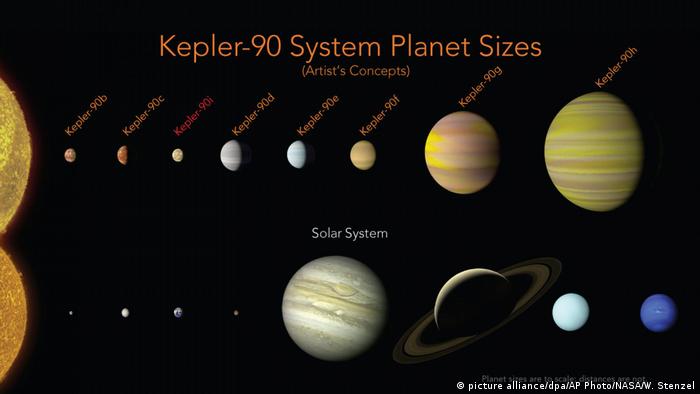 US Space Agency NASA announced on Thursday that applying artificial intelligence to Kepler telescope star data uncovered a new planet in a distant solar system, bringing the system's total planet count to eight and making it the largest known such system outside of our own.

The newly discovered planet, which has been named Kepler-90i, circles the Kepler-90 star, which is some 2,545 light-years away from Earth. One light-year equals about 9.5 trillion kilometers (5.8 trillion miles.) The rocky planet is much close to the Kepler-90 star than earth is to our sun and orbits it once every 14.4 days.

"The Kepler-90 star system is like a mini version of our solar system," said Andrew Vanderburg, an astronomic researcher at the University of Texas at Austin who worked on the discovery.

"You have small planets inside and big planets outside, but everything is scrunched in much closer."

NASA estimated the planet's surface temperature to be around 426 degrees Celsius (800 Fahrenheit) and said it likely was inhospitable to life. 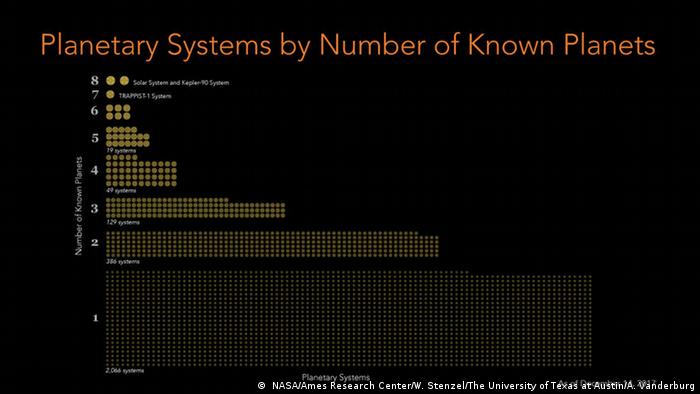 Many solar systems that have seven or fewer planets have been discovered, but Kepler-90 is the first to have eight planets, like our own.

Google AI teams up with NASA

Kepler-90i was discovered by training a computer to scan massive amounts of star data collected by NASA's Kepler space telescope, which has scanned more than 150,000 stars since its launch in 2009.

Vanderburg and Google AI software engineer Christopher Shallue taught a computer to review some 35,000 planetary signals that the Kepler telescope had collected and identify when the transmitted signals had dimmed. This indicates when a planet passes, or "transits," in front of a star. The computer then found weak transit signals that had previously been missed and that pointed to the existence of the eighth planet, Kepler-90i.

Shallue said he became interested in applying Google's machine learning technology to astronomy when he learned that "the Kepler mission had collected so much data that it was impossible for scientists to examine it all manually."

"Machine learning really shines when there is too much data for humans to examine for themselves," he added.

While machine learning has been applied before to the Kepler telescope's data, it is believed to be the first time that the technology has unearthed a new world. 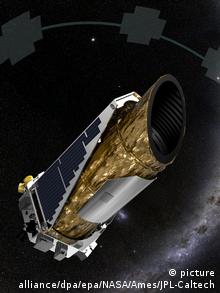 The Kepler space telescope has discovered some 5,000 planets since its launch in 2009

Vanderburg and Shallue's findings will be published in The Astronomical Journal. They intend to continue applying the machine learning technology to Kepler star data and believe more eight-planet solar systems will probably be found.

According to AP, Shallue also said Google planned to make public the code needed to do searches for planets outside of our solar system using a home computer and the publically available Kepler data.

The space probe Cassini has sent its last signal before hurtling into Saturn's atmosphere. It delivered fascinating pictures and information from the ringed planet for more than a decade. (15.09.2017)

Donald Trump plans to send US astronauts back to moon

President Donald Trump has directed NASA to return astronauts to the moon, and eventually send them to Mars. He steered clear, however, of offering any specific details about the difficult issues of budget or timelines. (11.12.2017)

Who's the better pilot - humans or AI?