The planets are likely the right size and right temperature to support complex life. The Kepler planet-searching telescope has detected nearly 50 such planets in one small part of the observable universe. 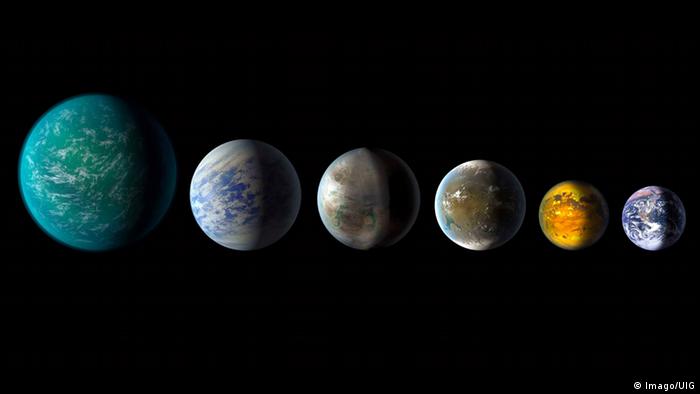 "Are we alone? Maybe Kepler today has told us indirectly, although we need confirmation, that we are probably not alone," said Kepler scientist Mario Perez.

Those 10 planets were orbiting suns at a similar distance to Earth's orbit around the sun. This distance is considered the "Goldilocks Zone" - not too close, not too far away from the sun, just right to support life.

Seven of these planets were circling stars similar to our sun. This does not mean life of any complexity has been found on these planets, but the chances that Earth is the only planet that supports life are dwindling.

"It implies that Earth-size planets in the habitable zone around sun-like stars are not rare," Harvard astronomer Avi Loeb wrote in an email to the AP news agency. Loeb was not part of the Kepler research team.

What is the Hubble Telescope?

Before Kepler was launched in 2009, astronomers hoped there would be Earth-like planets around about 1 percent of stars. Scientists involved with the Kepler telescope said that number is closer to 60 percent this weekend.

"This number could have been very, very small," said Caltech astronomer Courtney Dressing.

The Kepler telescope will soon make way for its successor. The Transisting Exoplanet Survey Satellite (TESS) will observe the brightest 200,000 nearby stars for two years starting next year.

Faraway world 'like no planet we know of,' scientists say

Scientists in the United States and Europe announce new details about a large, hot, and possibly watery planet. GJ1214b is relatively close, about 40 light-years away from Earth. (23.02.2012)

Vote: astronomer Montmerle says exoplanet names are sure to be inspired by Star Wars

The International Astronomical Union is inviting hobby astronomers to vote on names for 20 new exoplanets. They also want suggestions. From literary characters to movie names - almost anything goes. (09.02.2015)