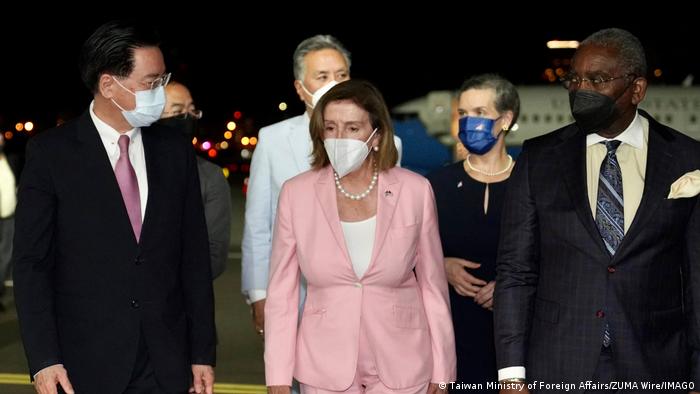 US House Speaker Nancy Pelosi landed in Taiwan on Tuesday in an unannounced visit that comes despite strong warnings of repercussions from China.

Shortly ahead of her arrival, Beijing's state media reported that Chinese fighter jets had crossed the Taiwan Strait, which separates mainland China and Taiwan. It was not immediately clear where they were headed.

Pelosi is the highest-ranking US official to visit Taiwan in 25 years. In a statement, the 82-year-old lawmaker said the US delegation's visit to the self-governed island "honors America's unwavering commitment to supporting Taiwan's vibrant democracy."

Visit to show 'solidarity' with Taiwan

Pelosi said discussions with Taiwan's leadership would focus on promoting shared interests and advancing a free and open Indo-Pacific region.

"America's solidarity with the 23 million people of Taiwan is more important today than ever, as the world faces a choice between autocracy and democracy," the statement said.

Taiwan's Foreign Ministry said the visit would "strengthen the close and friendly relations between Taiwan and the United States, and further deepen the global cooperation between the two sides in all areas."

Pelosi is on a tour of Asia that includes visits to Singapore, Malaysia, South Korea and Japan. She is expected to visit Taiwan's Parliament on Wednesday and meet the legislature's leader Yu Shyi-kun before holding talks with President Tsai Ing-wen.

Foreign Minister Wang Yi said US politicians who "play with fire" on the Taiwan issue will "come to no good end." Beijing considers Taiwan to be a renegade province of China.

China said its military had been put on high alert and would launch "targeted military operations." The People's Liberation Army also announced that it would conduct live-fire air and sea drills near Taiwan from Tuesday night.

Earlier this week, Beijing had warned there would be "very serious developments and consequences" if Pelosi were to visit Taiwan.

Chinese President Xi Jinping has made "reunification" with Taiwan a key objective and has not ruled out the possible use of force to achieve this.

Taiwan rejects China's sovereignty claims and says only its people can decide the island's future.

Washington follows a "one China" policy and recognizes Beijing instead of Taipei diplomatically, meaning that Taiwan does not have any official relations with the United States.

China demands that countries choose between holding formal relations with either Beijing or Taipei.

However, the US also provides considerable political and military support to Taiwan while stopping short of formal diplomatic relations.

How have analysts and officials reacted?

Ian Chong, an associate professor of political science at the National University of Singapore, told DW that Beijing is likely to continue its intimidation campaign for some time because "it can't look like it's backed down."

He acknowledged that there was "always the risk that there could be some accidents." However, an optimistic scenario would see Beijing maintain its "coercive threatening behavior" until it feels its message has been sent.

Bonnie Glaser, director of the Asia program at the German Marshall Fund, said there would be a heightened risk of escalation in the region if China send its fighter jets into Taiwan’s airspace.

She also said China's reaction to Pelosi's visit will partly depend on how the US politician conducts herself: "Is she going to have a press briefing where she tells the world what she's talked about in Taiwan? Will there be film footage of her meeting President Tsai? I think all of that will have some impact on how the Chinese react at this point."

"Pelosi's visit will help strengthen the foundation of the bilateral relationship between Taiwan and the US, which has been improving in a positive direction over the last few years," he said.

Shieh Jhy-Wey, Taiwan's representative in Germany, told DW that US House Speaker Nancy Pelosi's visit to the island represented a "break" with the One China Policy.

Shieh said that he considered Pelosi's visit a sign of "solidarity" towards Taiwan, one that "came at the right moment." He added that this is a "normal action between friends," alluding to Taiwan's longstanding alliance with the US.

Shieh argued that the democratic world needs to "stand together" following Russia's invasion of Ukraine. He added that the "world of freedom should protect Taiwan from an invasion from China," and that this would be the only way to win a war against "Chinese dictatorship."

DW also reached out to China's ambassador in Germany for comment but did not immediately receive a response.

With reporting from William Yang in Taipei.