This year, Namibia's oldest daily newspaper celebrates its 90th birthday. Since 1916, the German-language "Allgemeine Zeitung" has been informing the country's German speakers. 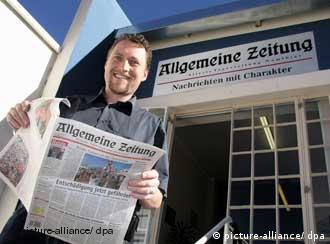 The Allgemeine Zeitung and Stefan Fischer, its editor-in-chief

"Breakfast wouldn't be breakfast without the AZ," said Almute Öl, who grew up with the Allgemeine Zeitung, Africa's one and only German-language daily.

Öl, who heads the German-language radio program in Namibia, said she would hate to have to go without the AZ, as the paper is affectionately called. "It's the thing that ties together our country," Öl said. 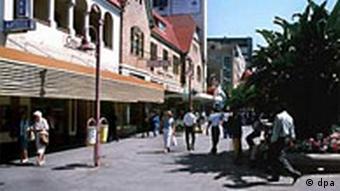 "It also has a unique point of view that the other newspapers don't have. It tells a lot more about the German community. We should be really proud to have a paper like this, in our own language. I buy it every day."

The 12-to-16-page Allgemeine Zeitung costs three Namibian dollars, around 35 euro cents. It has been accused of focusing too much on German subjects and on the past. But 36-year-old Editor-in-Chief Stefan Fischer, from Cottbus,said he begs to differ.

"The only thing that is German about the AZ is the language," he said. "We aren't a German newspaper in Namibia, like a lot of astonished tourists think when they first come here. We are a Namibian paper written in the German language."

In 1916, the paper was still called Der Kriegsbote (War Courier) and published excerpts from the emperor's speeches and war reportage from World War One.

Today, however, the topics are different, said Hoffman. "Land reform, criminality, sometimes natural phenomena, like our rainy season. And, oh yeah, the budget, and the fight against corruption." 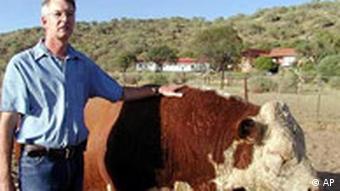 Farmer Martin Wucher is one of Namibia's German speaking minority

Editor Doro Greve said she thinks it is very important to cover Namibian topics and make an effort to get away from purely German news.

"I sometimes think some of our readers are a little bit stuck in the 1980s. I think it is our job to slowly but surely bring the readers up to the present time and say, 'Hey, this is Namibia today. This is new! And come along with us, stand up and be seen!' Because we see quite often that German speakers don't really want to get involved and open up to the public. And I think if we can help a little, as a newspaper we have really accomplished something."

'I know I have arrived'

One steady Allgemeine Zeitung reader is Wolfgang, who has paid regular visits to Namibia for the past 25 years. For him, the AZ and Namibia are inseparable.

"For me, the AZ personifies Namibia. It's like Fish River Canyon or the Spitzkoppe (mountain). It is a cultural institution of this country," he said. "When I fly into (Namibian capital) Windhoek and drive into town and sit with a cool beer, and I have the AZ in my hand -- then I know I have arrived."

Germany's colonial past was almost entirely erased from the public's memory. Now, a recent spate of books, films, and exhibitions is taking a critical look at this chapter -- and making it a matter of debate. (Sept. 15, 2004)

German archaeologists have given some 43,000 copies of rock art paintings, including the renowned White Lady of the Brandberg Mountain, to Namibia to help preserve the ancient art. (April 12, 2005)

When the Berlin Wall fell, a community of Namibian children educated in the former East Germany found themselves in the grips of a lasting identity crisis. One woman has now published a book about her experience. (Nov. 19, 2004)