A delegation of Namibian lawmakers is in Berlin to vigorously push for an agreement with Germany on the genocide it committed against the Nama and Herero people of Namibia more than 100 years ago. 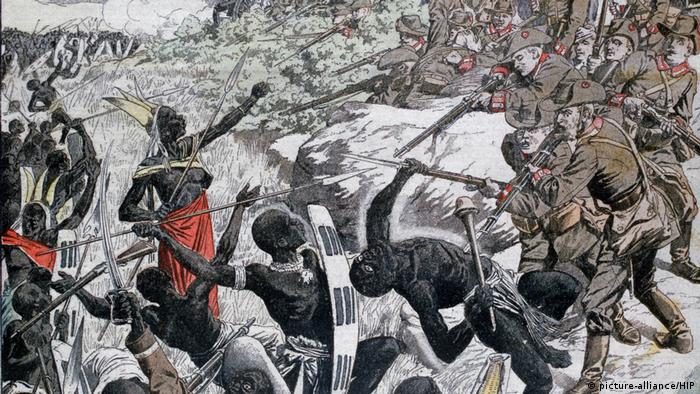 Between 1904 and 1908, German colonial troops stationed in what was then known as German South West Africa violently repressed attempted uprisings by the Nama and Herero ethnic groups. For many years, Namibia has been pushing Germany to accept the genocide committed against its people when it was still its colony, but the snail-pace at which Germany has handled the issue has often led to frustrations among ordinary Namibians, particularly the communities that were most affected. Now a delegation of Namibian lawmakers has arrived in Berlin where it will attempt to reach an agreement with Germany based on the German parliament's 1989 resolution to accept historical and political responsibility for Namibia. They also hope to foster closer ties with their German counterparts on issues of mutual interest. Peter Hitjitevi Katjavivi, a Namibian politician and Speaker of the National Assembly of Namibia spoke to DW's Daniel Pelz about the visit.

DW: Germany and Namibia have been negotiating a German apology for the genocide for years but have not been able to reach a conclusion. Why are you here in Berlin?

Peter Hitjitevi Katjavivi: The mere fact that we're here should underscore that there is a need for us as two parliamentary institutions to maintain very close ties. But we are also here to underscore the fact that for some time now our two governments have been negotiating the question of genocide with a view to finding an amicable outcome. We believe the two parliaments can reach an understanding and agreement on the genocide and that is being negotiated now. The time has come for us to act according to the resolution that was adopted by the German parliament as far back as 1989 that calls for historical and moral responsibility to Namibia.

Shouldn't the parliaments put more pressure on the governments to conclude this process as soon as possible?

I think our two governments do not need to be reminded of this. I think the top leaders who are involved in the negotiations are two honorable people who are absolutely seriously engaged and concerned and are very anxiously looking forward to finding an amicable solution. But I think at the same time there are issues that can be changed and discussed between the two parliaments. Our visit here is basically aimed at underscoring the urgency of the matter. Since our arrival here, I have discovered that there is that sense of urgency and appreciation of the fact that we need to cement the already cordial relationship that exists between our two countries.

Various motions have been tabled in the German parliament over the past year demanding a German apology but no motion so far has been passed. Does that disappoint you?

Not at all. Because I am aware that the current negotiations do involve an agreement that there must be an apology. When you are accused of having done something, there will always be a readiness to say "I'm sorry." It sends the right kind of signal that there is that acceptance of the fact that we in Namibia have been wronged. But to the best of my knowledge that apology will be forthcoming once we have an agreement. Then there will also be an understanding of the need to have a very clearly defined program towards healing the wounds of the past. In other words, a comprehensive program which is designed to provide development assistance to the affected communities in particular and to Namibia in general.

A group of Nama leaders have announced that they want to go to court in Germany to prevent a German museum from handing over a Bible and a whip to the Namibian government which belonged to the legendary freedom fighter Hendrik Witbooi. Is this a sign that the divisions over how to deal with the colonial past are actually widening in Namibian society?

What we need to do now is reach out to our compatriots with a view to convincing them that we should all be part of the negotiations. Obviously, there are always doubting Thomases in any given society. But I would like to emphasize the fact that to the best of my knowledge the doors are open for other Namibians who might have reservations [to discuss the issue], and there could be genuine reservations about the intention and the scope of this whole exercise.

Is the current relationship between Germany and Namibia only defined by the memory of the genocide against the Herero and Nama, or are there other aspects that we are actually overlooking in this present debate?

I think I am persuaded to believe that. Yes, we accept the fact that we have ties based on our historical past. In our respective constitutions we are saying to ourselves and to the rest of the world that never again will we subject our people to the hardship and destruction that was witnessed in our respective history. Now that is something obviously that brings us together. So we are picking ourselves up. We have emerged out of the ruins and we vigorously see ourselves as being champions of democracy and the rule of law.

This interview was conducted by Daniel Pelz. It has been edited and condensed for clarity.