Azerbaijan says 12 civilians were killed by Armenian shelling in the second city of Ganja. The spike in violence between the two former Soviet republics over Nagorno-Karabakh could also lead to a humanitarian disaster.

An Armenian missile strike leveled several residential homes in Azerbaijan's second city of Ganja on Saturday, Azeri officials said, in the latest escalation in the conflict over the disputed region of Nagorno-Karabakh.

The missile struck around 3 a.m. local time on Saturday (2100 UTC/GMT Friday). A second missile hit another part of Ganja and a third reached the strategically-placed city of Mingecevir nearby.

AFP cited a witness as saying he saw rescuers pull a small child, two women and four men from the debris in the minutes immediately after the Ganja strike.

"One woman was missing her feet. Someone else was missing an arm at the elbow," another witness said.

Azerbaijan's President Ilham Aliyev described the nighttime attack as a war crime and said his army would "take revenge on the battlefield." He promised to capture Karabakh by driving out Armenian forces "like dogs."

Armenia and Azerbaijan each accused the other of launching strikes on each other in the battle for Karabakh, which is internationally recognized as part of Azerbaijan but populated and governed by ethnic Armenians.

The fresh fighting defied hopes of ending the nearly three-week conflict over the enclave, which the two former Soviet Republics have been squabbling over for decades.

A Russian-brokered ceasefire agreed last Saturday to allow the sides to swap detainees and the bodies of those killed now appears to have broken down. 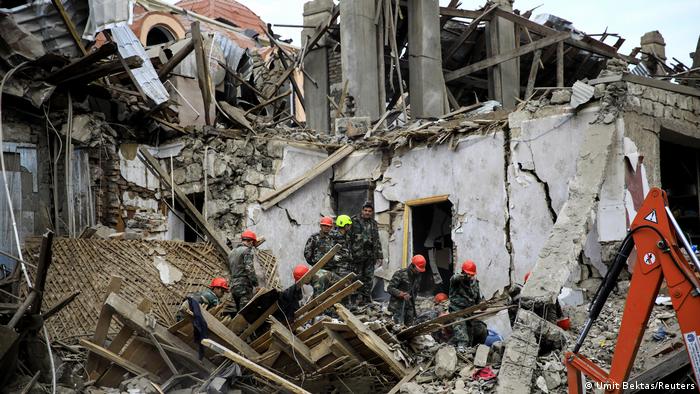 "There is little deterrent in terms of their [Azerbaijan's] advance and unfortunately, they're ignoring calls for a ceasefire. Armenia has an offer of no pre-conditions, an immediate halt to hostilities ... and unfortunately, it [the conflict] is spiraling dangerously out of control."

Meanwhile, a humanitarian disaster looms after more than half of the 150,000 population of the disputed region fled their homes.

The hostilities, close to pipelines in Azerbaijan that carry gas and oil to global markets, are stoking international concern that Turkey and Russia — already at loggerheads over Syria and Libya — will be dragged in.

US Secretary of State Mike Pompeo on Friday blamed Turkey for inflaming the situation by arming the Azeris.

Turkey has increased military exports sixfold this year to its close ally. Russia, meanwhile, is close to both sides but has a defense pact with Armenia.

In an interview with WSB radio Atlanta, Pompeo urged a diplomatic resolution, rather than "third-party countries coming in to lend their firepower to what is already a powder keg of a situation."

In what was seen by some as a warning to Turkey, the Russian navy on Friday launched maneuvers in the Caspian Sea. The Russian military said the drills would involve warships firing missiles at practice targets.

The decades-long Nagorno-Karabakh conflict re-erupted on September 27 and has so far killed more than 700 people, including nearly 80 civilians.