My Europe: Serbia's military parade between the East and the West 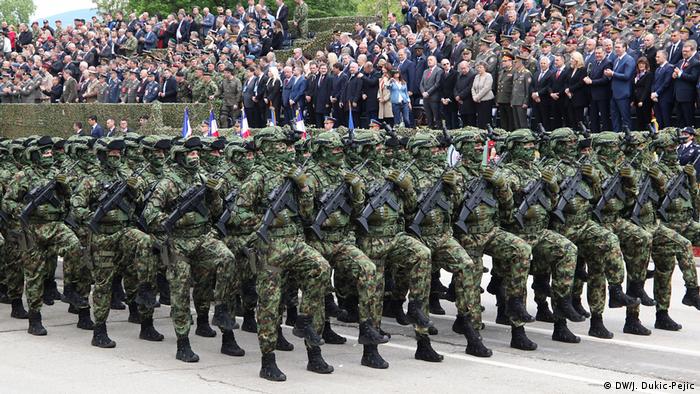 West Europe celebrates victory against Nazi Germany on May 8, and Eastern Europe marks the event one day later. This is due to the time difference between Berlin, where the surrender was signed, and Moscow. However, this year Serbia marked Victory Day on May 10 by holding a military parade in the southern city of Nis. The slogan was "Defense of Freedom."

The daily Danas, one of the few remaining independent newspapers in Serbia, attempted to find a historical reason for this delay, but could only determine that May 10 is the "Move for Health Day" which promotes physical fitness. This Friday is also the "International Monty Python Status Day" when users post quotes from the legendary comedy show on social media.

Serbian authorities did not provide an explanation for postponing the military parade, but there is one which is pretty plausible and not at all funny, except maybe for the Monty Python brand of humor: On May 9, Serbian president Aleksandar Vucic was taking part in an international conference in Tirana, Albania, so he would not be able to attend the central celebration if it were held on Thursday.

The parade was meant to give the impression it was inspired by anti-fascism and European values. However, it played out as a demonstration of power, harnessed to build up the cult of personality of the president and commander-in-chief Vucic. His presence was more important than respecting history. 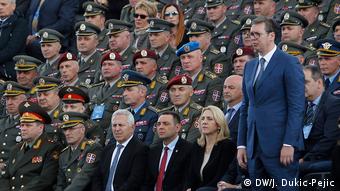 Serbia's more recent past still lingers like a dark cloud above it, even with the country negotiating its ascension to the EU. Initially, the big military parade was planned for March 24, the 20th anniversary of NATO launching airstrikes against Serbia and Montenegro. The bombing lasted for almost three months.

The West still tolerates Belgrade's tightrope walk between love for Vladimir Putin's Russia and the pragmatic alliance with the EU, but voices in Brussels and Washington warned that marking the event with a military parade would be too much, even for Serbia. The spectacle could be interpreted as sabre rattling, or at least a provocation against NATO. Also, the alliance does not like to be reminded of its highly dubious motives and just as dubious results of attacking Serbia.

Vucic folded and tied the parade to the Victory Day. Well, okay, he tied it to the day after Victory Day.

But the reason for having the parade at all is the 20th anniversary of NATO airstrikes, the pro-government daily Vecernje Novosti reminded the public — spelling it out clearly, just in case.

The military parade in Nis was also a spectacular demonstration of the efforts made by Serbian authorities to bridge the political and historical gap between Belgrade's alliances with Russia and the West. On the one hand, President Vucic declared joining the EU as the priority of Serbia's foreign policy, on the other, the centerpieces of the military parade in Nis were the Russian-made Mig-29 fighter jets, Russian-made MI-35 military helicopters, Russian-made T-72 tanks. Some of them Serbia had bought, others were gifts from Moscow. 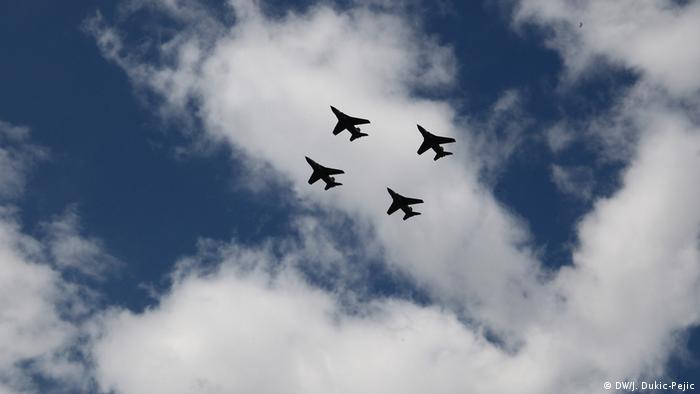 Also, all government-controlled media have been building up an anti-Western mood for several years and commemorating "NATO aggression" and "NATO war crimes" was the perfect occasion for it.

From Belgrade's perspective, NATO only bombed Serbia in order to take away Kosovo, the cradle of Serbia and the heart of its national identity. Serbia says it will never ever recognize Kosovo's independence and will work to block its acceptance into international organizations wherever it can, with Russia's support.

Demonstration of power and cult of personality

The Serbian military parade on May 10, which saw some 4,000 soldiers and police officers take part alongside 400 tanks and vehicles and 40 military jets, was basically a demonstration of power aimed at glorifying Serbia's leader Aleksandar Vucic. It has very little to do with values of anti-fascism which form the basis of the EU. 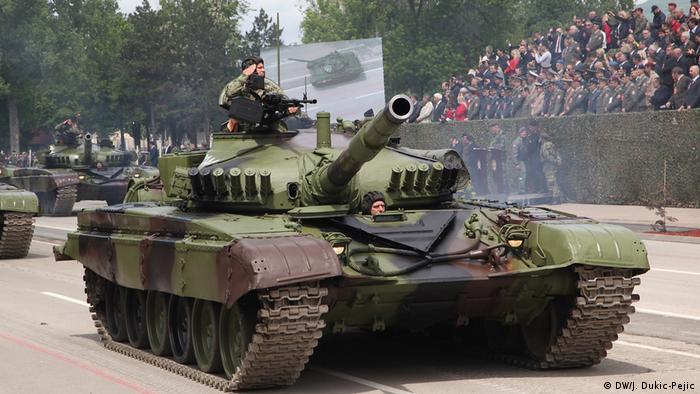 Also, if the parade was meant to show off the power of the modern Serbian military built on Russian hardware, this message is illogical. According to Serbia's constitution, the military must protect the territorial integrity of Serbia. Seeing how Kosovo — as far as Serbia is concerned – is a province temporarily occupied by "Albanian terrorists", the army would need to deploy to Kosovo. And seeing how that is not going to happen, there is the question of why is Serbia arming itself with Russian weapons? Are its forces waiting for better times? There are plenty of delusions of grandeur in Serbia, but even denying reality has its limits.

The purpose of the military parade in Nis was to extol the man who had placed himself above the parliament and above the government — Aleksandar Vucic. The people are being presented with an image of a strong, internationally respected Serbia, which is regaining military might somewhere between the East and the West. They are presented with an image of their own greatness — alongside with hope for a better life.

Serbian journalist Andrej Ivanji was born in Belgrade. He works as an editor for Serbia's "Vreme" magazine and as the correspondent of Germany daily TAZ and public broadcaster MDR.

Amid Russia's war in Ukraine, Serbs head to the polls to vote in presidential and parliamentary elections. President Aleksandar Vucic is on course to win a second term, reiterating in television interviews that his victory would deliver "peace" and "stability."