′My country first′ policy a threat to global goals - report | Business | Economy and finance news from a German perspective | DW | 07.07.2017

'My country first' policy a threat to global goals - report

A German think-tank warns that the US, Russia and China are lagging in efforts to meet the United Nations 2030 development goals. A report by the Bertelsmann Foundation partly blames growing protectionist policies. 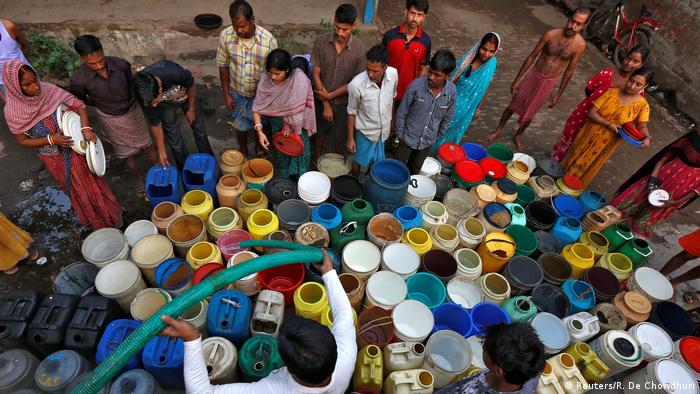 World leaders have been urged to strengthen efforts to meet the United Nations' Sustainable Development Goals (SDGs), which were agreed by 193 member states in 2015.

The appeal was made in a report released on Thursday by the Bertelsmann Foundation, timed to coincide with the G20 summit in Hamburg this weekend.

The report's authors said many of world's the richest countries are lagging behind on pledges to meet the Agenda 2030 objectives that they signed up to two years ago in New York.

The SDG roadmap includes ending global poverty and hunger while working towards quality health and education, clean energy and equality, among other issues.

Rich nations not doing their part

Bertelsmann said industrialized countries are not serving as role models against a background of growing protectionism and nationalism, as more and more leaders adopt "my country first" policies, in reference to US President Donald Trump's call for more trade barriers to boost the American economy.

Such a lack of leadership is making it difficult for poorer countries to reach their own ambitious targets by 2030, the report said.

Out of the 157 states compared by Bertelsmann in cooperation with the Sustainable Development Solutions Network (SDSN), the US came in 42nd place, Russia ranked 62nd and China came 71st.

The report blamed income inequality, high consumption levels and carbon emissions for the low scores. As well as struggling with their own development goals, developed nations are holding back poorer countries, for example, through their geopolitical and economic policies, protection of tax havens and inadequate funding of development aid.

The countries most likely to meet the requirements are Scandinavian: Sweden ranks first, followed by Denmark and Finland.

The furthest from effective implementation are African states like the Central African Republic, Chad or the Democratic Republic of the Congo.

Among the G7 countries, only Germany and France can be found among the top ten performers.

The report's results "highlight the need for urgent action on the part of G20 countries in making sustainable development a reality both within and beyond their borders," said Jeffrey Sachs, SDSN director, in a statement.

"If the world is to achieve the SDGs, all countries must take up the goals as part of their national development strategies and ensure that they take responsibility for their impact on the rest of the world."

"Protectionism is a one-way street which could not bring us back to the implementation of Agenda 2030, but back to 1930. The G20 states should set a clear signal for global goals and against national egoisms in Hamburg," he said.

G20: A summit full of contradictions

G20 leaders will meet in Hamburg on July 7. There has never been a time when there was more dissent within the group. German Chancellor Angela Merkel, this year's hostess, will have a lot on her plate. (06.07.2017)

The continent is upping the pressure on wealthy nations to make good on their climate finance pledge. But a lack of expertise on the ground has also stalled crucial adaptation projects.