Indian Muslim women are speaking up against a method of divorce that allows a husband to dissolve a marriage in a matter of seconds. DW speaks to a campaigner who is at the forefront of the efforts to scrap the practice. 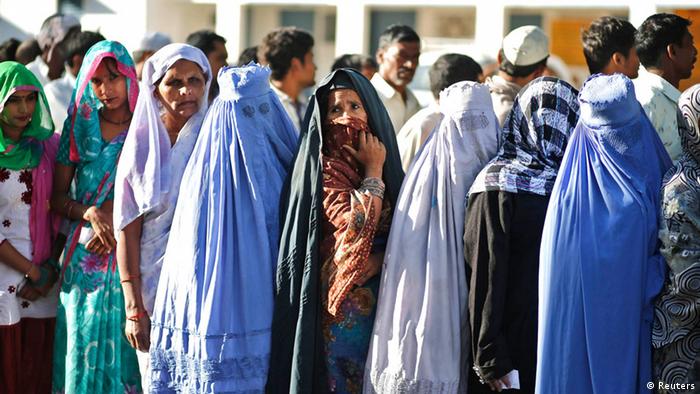 India allows ''triple talaq,'' a controversial Islamic way of getting a divorce where a husband can dissolve a marriage only by saying or writing the word "talaq" - meaning divorce - three times to his wife. The method is banned in many Muslim countries, including India's neighboring Muslim-majority nations Pakistan and Bangladesh.

Muslim women in India are now campaigning for outlawing the practice. Two divorced women from the community of 155 million Muslims recently took the issue to the nation's top court.

But Noorjehan Safia Niaz, co-founder of the Bharatiya Muslim Mahila Andolan (BMMA), a charity helping to empower Muslim women, says the Supreme court's ruling on this issue won't solve the problem. In an interview with DW, she explained what needs to be done to get rid of it.

Noorjehan Safia Niaz: Muslim family laws in India are not codified yet. All religious communities in the country have their own personal laws. But while Hindus have their codified personal laws, Muslims don't have it. They only have two small pieces of legislation.

But there is no clear law on issues such as the legal age of marriage between a Muslim boy and a Muslim girl, the method of divorce, the custody of children and polygamy.

And because there is no law, the community tries to follow their own understanding of what the Sharia law is. And the Sharia law as practiced in India is in complete contrast to the Koranic citings. So, while the Koran gives out a method of divorce, which is called the Talaq-e-Ahsan method that gives a fixed time of separation before the divorce, it is not followed by the community.

Muslim men in India have been divorcing their wives over text message, phone call or even social media websites, due to an ancient Islamic law. A new report shows that Muslim women are fed up. (13.08.2015)

Is Pakistan's Hindu marriage bill a vow of tolerance?

The Hindu minority in Pakistan will soon be able to legally register its marriages and divorces with the state. What does this mean for the rights of the community, and why did it take so long? DW examines. (17.02.2016)

Pakistani media are revelling in the details of a high-profile celebrity divorce. But their coverage of the incident is highlighting questionable attitudes to women in the country. (30.10.2015)

How many women are affected by this practice every year?

We don't have any exact statistics. But we conducted a study with nearly 5,000 women across the country last year and we discovered that 78 percent of the divorces that happened among the Muslims were unilateral. Muslim husbands wanted those divorces and got it immediately.

Are women allowed to use the triple talaq method to obtain divorce?

No, they are not authorized to use any instant method. If a Muslim woman wants a divorce, she has to either approach a Kazi, a local person who is allowed to arrange divorce based on Islamic method, or the court or any other non-governmental organizations that are working in the area.

She has to go somewhere to register her application for divorce. But that is not a requirement for a Muslim man. If he wants a divorce, he can just say orally, and it is done.

What is your organization doing to stop the controversial practice?

We are campaigning for a codified Muslim family law, which is based on the Koran as well as ensures gender justice. We have been holding public discussions nationwide over the past few years. We have come out with publications where Muslim women shared their stories of how they have been divorced.

As part of our latest campaign, we started talking to the government. Our appeal to the national women's commission has been that it should look into this issue as well as call for a ban on it. We collected 50,000 signatures of people who support our appeal.

How does the Indian Muslim community react to that?

There has been a lot of support, especially women have come out in large numbers to show support. It is also a good thing that very recently a group of Muslim men came up with a public statement stating that this method of divorce has to go. So, slowly and gradually, a lot of people within the community are speaking up, and they are demanding that the practice has to end.

Two Muslim women have asked India's Supreme Court to outlaw the practice. Does it help your campaign?

The court will have to intervene, although there are many Supreme Court verdicts against the practice. But they do not have the force of law. That's why we think judgments alone are not enough; we need a law banning the practice of triple talaq.

For such a law to become reality, you need support from parliamentarians. Do they help your cause?

Noorjehan Safia Niaz is co-founder of Bharatiya Muslim Mahila Andolan, an organisation dedicated to the rights of Muslim women.