A convicted murderer in a US prison has taught himself the basics of higher mathematics, enabling him to solve a complicated arithmetic problem. And he has been passing on his math passion to his fellow inmates. If Hollywood had made up this story, you would think: "Well, that's pretty far-fetched. Cheesy. All a bit overblown." But, as we know, reality can be stranger than fiction.

For a long time, however, reality was very hard for Christopher Havens from the United States. The 40-year-old has been in prison near Seattle for nine years after being convicted of murder. Havens dropped out of school, went off the rails, couldn't find a job and became a drug addict. He was sentenced to 25 years in prison for the murder and still has 16 to go.

But in prison, Havens' life changed when he discovered his passion for math. He taught himself the basics of higher mathematics, which was not easy to do because the prison wardens intercepted the books he had ordered by mail. Havens was allowed to have the textbooks only after he had agreed to teach math to other prisoners as well. 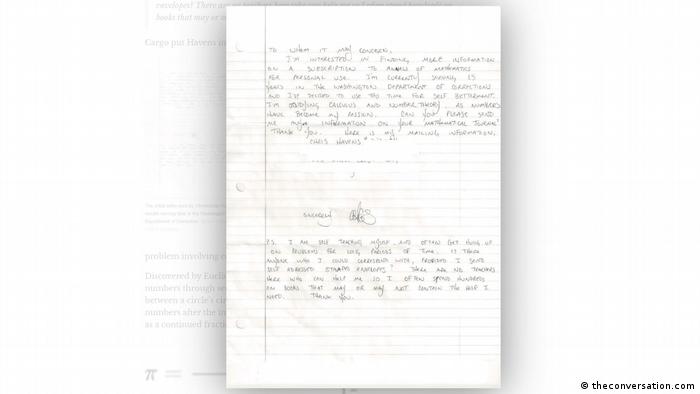 After a while, basic higher mathematics was not enough for him. Havens sent a short handwritten letter to a mathematical publisher and asked for some issues of the Annals of Mathematics, a renowned journal in the field.

He wrote that numbers had become his "mission" and that he had decided to use his time in prison for self-improvement. However, he lamented in the letter, he had no one with whom he could discuss complex mathematical topics.

An editor at Mathematica Science Publisher sent the letter on to his partner, Marta Cerruti, who in her turn forwarded it to her father, the mathematics professor Umberto Cerruti from Turin.

He was initially skeptical, but as a favor to his daughter he wrote an answer to Havens and gave the prisoner in Seattle a problem to solve to test his abilities.

Marta Cerruti, an associate professor for materials engineering at McGill University in Montreal, Canada, has described how Havens' unusual story went on in an article for the  website "The Conversation."

After some time, Umberto Cerruti in Turin received the answer by mail: a 120-centimeter-long (47-inch-long)  piece of paper with an incredibly long formula written on it. Cerruti first had to enter the formula in his computer to check what the prisoner had sent him: Havens had solved the tasks correctly.

The Turin mathematics professor then invited Havens to help him with an ancient math problem that Cerruti himself had been trying to solve for a long time.

Using only pen and paper, Havens tinkered for a while with the problem from number theory involving so-called continued fractions, over which the ancient Greek mathematician Euclid had already racked his brains.

This number theory is used, for example, in modern cryptography, which is of decisive importance today in banking and finance and in military communications.

And indeed: Havens cracked the age-old math puzzle and for the first time found some regularities in the approximation of a large class of numbers. 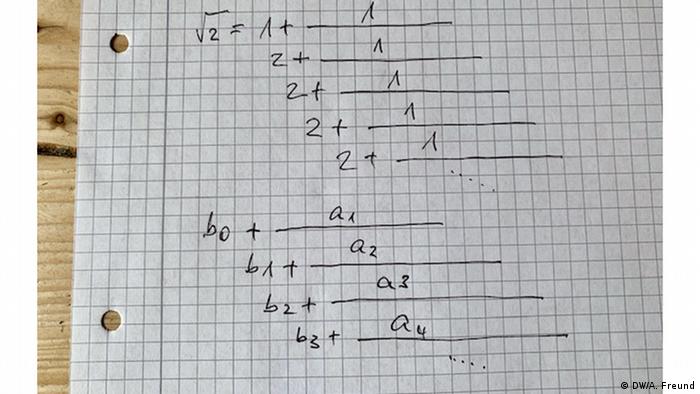 Cerruti helped Havens to formulate the proof in a scientifically correct manner, and a few months later, in January 2020, the two of them published it in the journal Research in Number Theory.

This was already quite an achievement. But the prisoner Havens not only cracked an ancient problem of mathematics: He also managed to inspire a group of fellow prisoners for the world of numbers through his passion. A regular math club has since been formed at the prison.

Among other things, Havens celebrates March 14 every year with the 14 fellow prisoners in the club as "Pi Day," named after the well-known mathematical constant often approximated as 3.14. Umberto Cerruti from Turin was also able to take part in one of these unusual celebrations under the strictest security measures.  The professor was also impressed by a prisoner who recited the first 461 decimal places of pi by heart, as he wrote in an article entitled "Pi Day behind bars — Doing mathematics in prison" in the journal Math Horizons.

During the 16 remaining years of his prison sentence, Havens wants to go on to study other mathematical topics. He feels that doing mathematics is a way for him to pay his "debt to society," according to Marta Cerruti, who has held several conversations with the prisoner. After his time in prison, Havens wants to study the subject officially, she says.

And perhaps his unusual life story will really have been turned into a Hollywood film by then.