German police cleared one of the terminals at Munich Airport after a woman slipped past a security checkpoint. The breach caused hundreds of flights to be canceled. The woman has not been taken into custody. 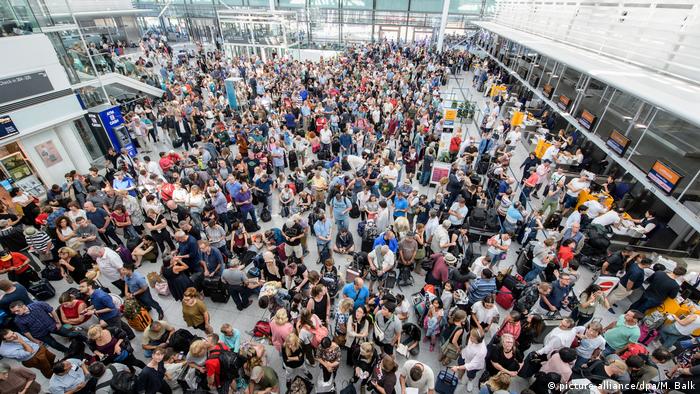 Around 200 flights were canceled on Saturday after authorities at Munich Airport temporarily closed Terminal 2 following a security breach.

At around 6:45 am local time (0445 UTC), police were notified that an unknown individual, later identified as a 40-year-old woman, passed through a security area without being checked by personnel, which prompted an hours-long search through the terminal, an airport spokeswoman said.

About 60 other flights were delayed by at least a half an hour. It wasn't until seven hours after the closing that flights began to take off.

A police spokesperson said authorities know who the woman is and where she is from. She has not been taken into custody and is still at large, but said she is not considered an "extreme danger." They declined to share what consequences the woman would face.

Travelers wrote on social media that they were not being allowed to leave their planes and complained about cancellations and delays.

Some posted pictures of packed arrival halls in Terminal 2, which is mostly used by German airline Lufthansa and its partners.

The temporary shuttering of the terminal comes amid a busy summer travel period, with this weekend marking the beginning of Bavaria's six-week summer vacation period.