'Mudlarking' around on the Thames

History is everywhere in London and, not least, on the banks of the river Thames, where now you can go on tours in the hope of digging up pieces of history which could, if you're lucky, end up in a museum. 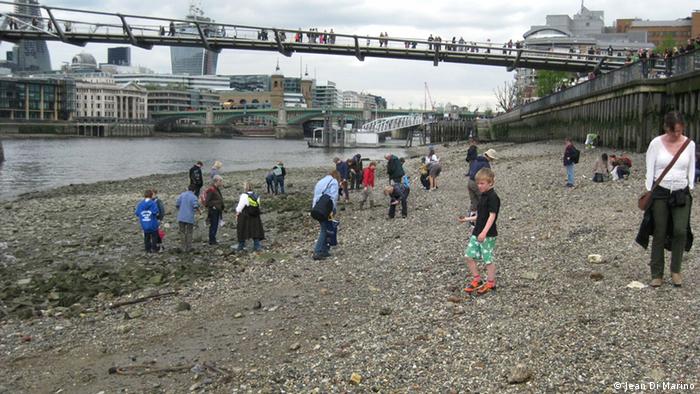 There's something very satisfying about paddling around in the mud and rocks of a river foreshore. If the foreshore happens to be part of London's River Thames, then there's a good chance of finding something historically significant, too. There's been a surge of interest in treasure hunting in the UK. Historians say the finds made by amateur archaeologists are playing a pivotal role in constructing England's historical past.

Now visitors to the country can take a stab at unearthing history too. One popular guide in London, for example, takes tourists ‘mudlarking' and many of their finds end up in museums. One such group of visitors gather on the banks of the River Thames, in the heart of London. Stooping and peering, they pick through the stones and mud at their feet, hoping to find treasure left behind by past generations.

A walk through a muddy past 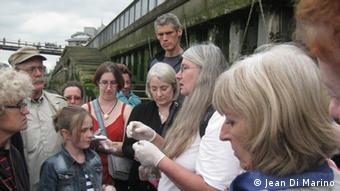 As the guide, archaeologist Dr Fiona Haughey says, here on the Southern banks of the river, is an historic location: "Really it was the 'red light district' in Shakespeare's time. We had four theaters here - The Rose, The Hope, The Globe and The Swan. We had bear baiting, boar baiting and of course the 'ladies of the night'. So we're on the interesting side of the river."

Dr Haughey has been combing the Thames foreshore for 20 years. At regular intervals, she leads tours explaining the intricacy of ‘mudlarking', a pursuit she says is hundreds of years old. 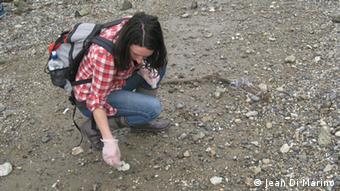 Poking around in the mud

"It was usually boys who were sent down in to the mud when the tide went out to find what had been dropped off the ships when they were offloading in order to be able to sell them to get money to live," Dr Haughey explains. "Because they were in the mud, they were called mudlarks." And although they're not searching for their supper, today's tourists and aspiring mudlarks make some interesting finds. As they gather around her, proudly holding out the items they've found, Dr Fiona patiently explains each find and its origin and age. 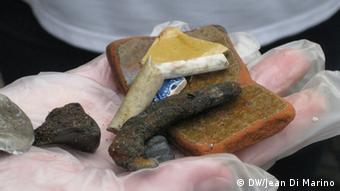 "This is a bit of clay pipe stem," she tells Rachel, a 35-year old visitor holding out what looks like an off-white broken tube. "The problem with the stems is that very rarely is there anything on it that you can use to date them. I've got two pieces -not from here- that say diamond jubilee on them. And I tell you, it wasn't 2012 and we've only had two," she adds, referring to Queen Victoria's diamond jubilee in 1897.

From the Ice Age to Shakespeare

Dr Haughey herself has found everything from ice age hand axes to Neolithic pottery in her own exploration of the Thames foreshore. She says her tours have also turned up artifacts of considerable historical significance.

"We've had a few pilgrim badges found that were interesting and those were things that have gone up to the museum for people to look at," she exclaims proudly. 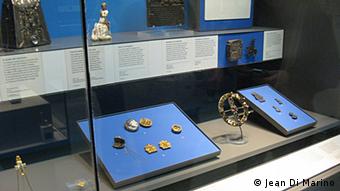 On a visit to the British Museum, we find part of its collection of pilgrim badges in the Medieval Europe gallery on the third floor. Dr Michael Lewis, the Museum's Deputy Head of Portable Antiquities who is showing us around, is currently researching pilgrim badges and their uses. "People would go to Canterbury," Doctor Lewis explains. "They'd buy a badge of St Thomas A'Becket and they would touch that badge on the shrine of the archbishop."

"Then whatever their concern was -it may be they've committed some sin, it may be they've got some sort of disease or ailment," he continues, "it would be hoped that by holding this badge close to them, that that would cure them of that ailment or that sin." 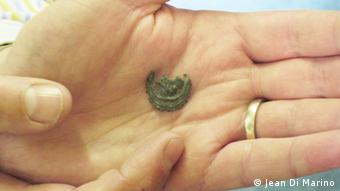 Pilgrim badges were the world's first souvenirs, sold to visitors travelling to religious shrines in the Middle Ages. Though hundreds of thousands of badges were made, now only a few remain. And it's the mudlarks who have unearthed most of them. "I've also got an interesting badge -one of my favorite badges- this one is basically Mary and Child on a crescent moon," Doctor Lewis enthuses. "These badges are only really found on the Thames foreshore. They haven't really been found anywhere else."

According to Dr Lewis, archaeological excavation in England is 'development-led', meaning that it takes place when builders at a construction site unearth or are expected to unearth something historically important.

Amateur archaeologists like mudlarks and those using metal detectors are more adventurous – often going where the professionals don't. And Dr Lewis says their finds can alter our picture of the past. "Many of the finds are very fragmentary small pieces. They are like little pieces in a jigsaw puzzle that help us create a picture of the past," he explains. "By putting them together we get an idea of what's going on. They can actually rewrite history." 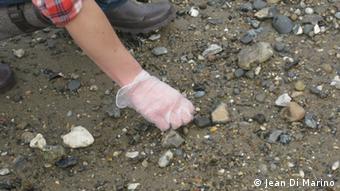 So back at the tour on the Thames foreshore, we review the days' finds. There's the lower jaw of a horse, a roof tile from the Tudor period, flakes of pottery, bits of coal, a bucket handle and a bed spring. Oh well. Even the most promising mudlarks can't rewrite history every day.

Neuenburg has the mood of a gold rush on Saturdays. That's when amateur treasure seekers wade into the Rhine River and pan for gold. With a little luck, they bring slivers of the precious metal home with them. (16.10.2006)

A dramatic fly-by brought four days of royal celebrations for Queen Elizabeth's Diamond Jubilee to an end in London. (05.06.2012)

Queen Elizabeth II's Diamond Jubilee celebrations have officially begun with a 41-gun salute at the Horse Guards Parade in central London, marking the exact anniversary of her coronation. (02.06.2012)

Britain opened its first desalination plant this summer, and more recently, another British firm meanwhile said this month that its new method of desalination could transform water on a global scale. (28.09.2010)

Berlin's river Spree was long slighted by the city's inhabitants, who saw it as little more than a murky cradle of industry. Now this jaded jewel is being dusted down and polished to a state-of-the-art sparkle. (24.07.2004)

In Montenegro, a man went on a shooting rampage after a family dispute, killing 11 people. The shooter was later killed after firing at police officers.