Neuenburg has the mood of a gold rush on Saturdays. That's when amateur treasure seekers wade into the Rhine River and pan for gold. With a little luck, they bring slivers of the precious metal home with them. 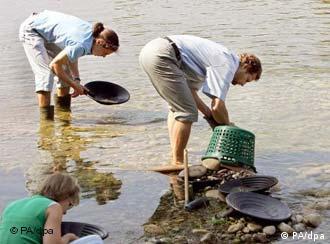 Gold rush on the Rhine

Neuenburg, a city on the Rhine River, has the mood of a gold rush town on Saturdays. That's when amateur treasure seekers wade into the Rhine to learn the art of panning for gold.

With a little luck, at the end of the day they bring precious metal back home with them.

A little known fact: There really is gold in Germany's Rhine. You're not likely to find coins or goblets, "but one is guaranteed to find at least little flecks of gold," said hobby gold prospector Franz-Josef Andorf.

In Neuenburg, Andorf teaches a class for locals and tourists interested in gold panning. 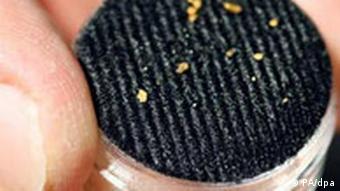 Small flecks of gold found in the Rhine River

"This is a totally thrilling feeling," said Helga Maier-Garlipp, who is taking her first course with Andorf. She's lucky: standing at the bank of the Rhine, her hand holds several wafer-thin gold flecks.

The Rhine deposits more gold in Neuenburg than in the rest of Germany, Mayor Joachim Schuster says with pride. The precious metal comes from a geological formation in Switzerland and gets moved down several rivers to the Rhine. The quantity of gold is small, there's nowhere near enough to cause a gold rush like in California or Australia.

Yet what's there has been keeping people hunting for hundreds of years.

Gold flecks can be found in river detritus that gets agitated and washed up during high water, Andorf said. To search for the gold, his students dig up the hardened riverbed with picks and shovels. Andorf's students put the material through a wash pan. The sand gets washed out, leaving hard minerals and gold in the bottom of the container. 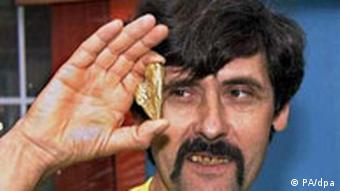 This gold nugget was found in Switzerland

The motion needed for panning the gold is not so easy and requires practice, Andorf said. Also, novices often get tricked by pyrite. The so-called fool's gold glitters in the pan and sometimes causes premature celebrations.

"When you can't split the piece with your thumbnail, then it is really gold," Andorf told his students. The gold slivers they find in the Rhine are, for the most part, smaller than a millimeter.

Andorf's course is organized as a continuing education program for people who want to pursue gold panning as a hobby. The class is not meant for professional treasure seekers.

A German state plans to earmark a part of the Rhine river as a special protection zone to meet EU requirements on preserving the natural habitat. But the move has elicited mixed reactions. (05.03.2006)

You might not be winning the Yellow Jersey just yet, but cycling can still be a rewarding experience. A tour by the Rhine offers many delights - all taking a fraction of the energy needed to win the Tour de France. (30.07.2003)

After medieval cathedrals and baroque palaces, a rather unusual candidate in Germany makes it to the UNESCO list of world heritage sites- a former mine called the “Zollverein” in the German Ruhr valley industrial region. (17.12.2001)

Works by the Swiss sculptor, who was known for making art from scrap metal, will be on display on a barge. The Tinguely Museum in Basel is sending the works on a European voyage by boat.

The move marks the first ever UNESCO recognition of Jewish cultural heritage in Germany. A stretch of the Roman military border, the Limes, also received recognition.