Mubarak fined millions for communications cut | World | Breaking news and perspectives from around the globe | DW | 28.05.2011

An Egyptian court has fined former President Hosni Mubarak for cutting telecommunication services during the uprising that toppled him from power. Mubarak is set to stand trial for abuse of power and killing protesters. 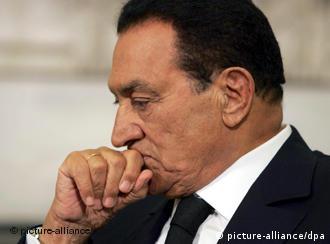 Mubarak is set to stand trial for abuse of power

The three former officials are to pay the fines from their personal funds. The money will enter the Egyptian treasury.

The court ruled that the three men were guilty of "causing damage to the national economy."

The ruling was the first against former president Hosni Mubarak since he was forced to resign last February under pressure from a mass uprising against his authoritarian regime.

Mubarak was ordered on Tuesday to stand trial for killing protesters. On Saturday, he was officially notified of his referral to court for abusing power and wasting public funds.

At least 800 people were killed during the protesters that ultimately toppled Mubarak from power. More than 6,000 people were wounded by live ammunition, rubber bullets, water cannons and batons.

Mubarak is currently being detained in a hospital at the Red Sea resort of Sharm el-Sheikh. He suffered apparent heart problems during questioning.

Opinion: Is Egypt's revolution in danger?

Some experts believe the clashes between Coptic Christians and Muslims in Egypt are being fueled by the remnants of Mubarak's old regime. However DW's Rainer Sollich says that explanation is too easy. (09.05.2011)

Egyptian prosecutors are currently investigating ousted president Hosni Mubarak. But it is still uncertain whether it will lead to the trial so many Egyptians are demanding. (05.05.2011)