Egyptians fear new-found freedom could be short-lived | World | Breaking news and perspectives from around the globe | DW | 15.04.2011

Despite the arrest of Hosni Mubarak, Egyptians are not convinced that the military is truly committed to allow freedom and fair elections, says the foreign affairs spokeswoman for the Greens in the European Parliament. 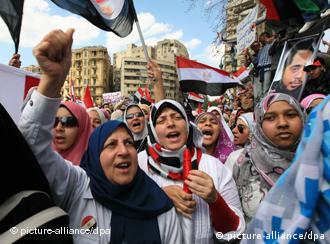 Egyptians are cautious about having too high expectations

Franziska Brantner, the foreign policy spokeswoman for the Greens in the European Parliament, travelled to Cairo this week and spoke with various human rights activists, bloggers, the Muslim Brotherhood and government representatives. The interview was conducted during her visit to Egypt.

Deutsche Welle: The crisis in Libya has relegated the revolution in Egypt and its aftermath to the sidelines of international news coverage recently. What's the public mood and sentiment on the streets of Cairo now two months after Hosni Mubarak was forced from power?

Franziska Brantner: People are very impatient. They have a sense that they have achieved a revolution, but the system has now been replaced by the military. There are still a lot people that are put in jail and many military, but no civilian trials and a lack of transparency. So we have the impression here that people are afraid that things are not really going forward in the sense of a real democracy and people are really getting more and more impatient with the current transitional government that is run by the military.

Some have these fears, but not everybody agrees with this analysis. Some people are saying that outside pressure, for example from the European side, isn't strong enough on increasing transparency, stopping arrests and military trials of civilians. They feel that there might come a situation where they don't have elections in a free climate with free media and free organizations, but where there are again manipulated elections which isn't good enough anymore.

There is also the danger that everybody is focusing now on the elections, but not on creating a conducive environment of really free media and freedom of association because the military is of course already starting again to limit these freedoms. Those are I think the main worries of the people here.

Mubarak and his sons have been detained for 15 days in order to investigate charges of corruption and attacks against demonstrators. How do Egyptians you have talked to react to the arrest and investigation of Mubarak? 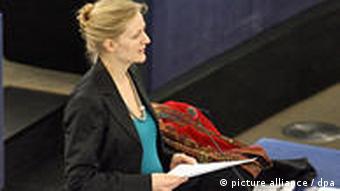 People are reacting with caution to the news of the arrest. On the one hand they are happy that authorities are now taking on the case of Mubarak and his clan, but on the other hand they are also afraid that this is only happening because of the pressure from Tahrir Square from last Friday. And that it is not happening again simply because of a good public prosecutor who wants to investigate the charges of human rights violations that have been made by NGOs, but it's again more a sort of stage act in order to satisfy the people and less in order to establish a fair and correct trial where you really collect facts and investigate the issue.

So on one hand they are happy, on the other they are afraid that the trial will not be one that enhances democracy, but simply another sign that the military is just trying to pacify the population.

During your visit to Cairo you spoke to various activists for women's and human rights, bloggers, but also the Muslim Brotherhood. Of course this is a very small and exclusive sample, but from your sense are Egyptians ready for democracy?

So we have to be aware that there are discussions and debates happening in every part of society. And what's important is to ensure that this is taking place in a free and open political climate over the next few months. We were really intrigued and impressed to see how open they debated among themselves and to see how just to the small sample of people we talked to there were so many different opinions on all the issues.

Do you think that the military and business establishment that arguably profited the most from Mubarak's rule is prepared to allow real and not just cosmetic change?

This is one of the major questions. There are of course vested interests and that was another concern many have raised - also in terms of European companies - to what extent there would be bribes and to what extent money would decide the elections in September. That is definitely a topic that needs to be monitored.

What role can Europe and the US play to support this nascent democracy and freedom movement in Egypt?

I think what's really crucial is that we don't let the current interim regime of the hook. That we don't just take our eyes off of Egypt and turn just to Libya or other hotspots and forget what's happening here. Instead we need to monitor and continue to criticize human rights abuses if they occur.

As far as we can support actors here on the ground, I think it is vital that we support them in what they think is important and not that we just approach them with ready-made ideas. In addition, it's also key to allow an exchange of ideas for example by inviting young people to come over to get to know the EU for a week or two, to interact with politicians and officials so they can see how the EU works. So I think there is a lot the EU can do aside from simply sending more money.

And finally how do the Egyptians view the situation in neighboring Libya where Moammar Gadhafi is unwilling to give up power and there's a humanitarian crisis with thousands of refugees?

A lot of people talk about it and it's a very delicate topic for them. They deeply empathize with the opponents of Gadhafi and they usually welcome the UN resolution. Some of them immediately criticize and attack Germany and ask why did you stay neutral on Gadhafi?

But on the other hand when you ask them whether they think Egypt should intervene they say that they have so much internal trouble right now, that they don't think they can play a role outside of Egypt. So there is a mood of we can't help right now, we have too many problems internally. But most of them are rather in favor of the intervention in Libya that is taking place right now.

Former Egyptian leader Hosni Mubarak has been detained as part of an inquiry into the violent crackdown on anti-government protesters. His two sons are also being held as part of the investigation. (13.04.2011)