The UN has described Cyclone Idai as one of the deadliest storms on record in the Southern Hemisphere. More than 1,000 have died, and millions are still fighting for survival. DW spoke with aid worker Ninja Taprogge. 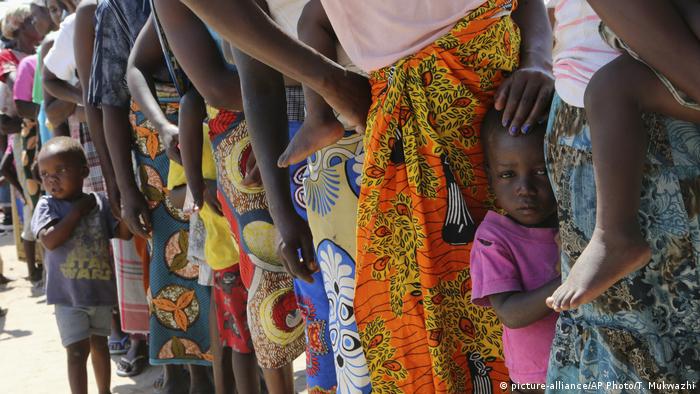 DW: You're currently in Mozambique, which was hardest hit when Cyclone Idai struck southeast Africa in late March. How is the situation there?

Ninja Taprogge: The situation in Mozambique remains tragic. I just came back from the city of Beira. Many places are still flooded. And several days ago, we went to a small village where locals still had not received any help. Our organization distributed supplies to 2,000 families there. Each family received 30 kilos (about 65 pounds) of rice, 5 kilos of beans and 2 liters (half a gallon) of oil.

What have locals reported?

I talked with a woman who has been living solely on corn she has found in her fields. Her village, and the entire surrounding region, was flooded. She showed me the corn. It smelled foul, and was very dirty. She then told me that one of her children is now suffering stomach pains and has diarrhea. We had a look at the fields — they were totally destroyed.

Many are living in emergency shelters. People are living cheek by jowl. More than 240,000 homes were severely damaged or destroyed. It will take a long time until they're rebuilt. CARE is assisting in these efforts by providing tarps and ropes to families, so they can at least make temporary shelters. The regional infrastructure was also badly damaged, and many schools were destroyed. Our organization is helping by building tents that serve as temporary classrooms.

Which diseases are causing the greatest problems?

Malaria, in particular. With temporary shelters, families are sleeping in the open, and they need mosquito nets to protect themselves from diseases. CARE and other humanitarian organizations are very concerned about this.

How long do you think CARE will have to remain in the region and provide aid?

The biggest problem is that crops have been entirely destroyed. Experts estimate that more than 700,000 hectares (about 1,700 acres) of arable land were wiped out by the floods. It's important that we provide help now, because some people have not eaten in weeks. But we need to stay for longer than that. People must also have access to seeds, to grow new crops.

Currently, there isn't enough money to address this crisis. The United Nations has said it will only provide 23% of the necessary €250 million ($280 million). That's far too little.

What needs to happen over the next few months?

We need more money to deliver urgently needed help, but also to undertake reconstruction work and assist people in rebuilding their homes. We need to help them plant crops and generate a living, so that their families can survive.

With heavily-populated areas of Mozambique now covered by a massive lake, survivors of Cyclone Idai face disease and hunger. Aid agencies say time is running out for the victims. (23.03.2019)