In southeast Africa, the search is on for Cyclone Idai's victims. In Zimbabwe, Mozambique and Malawi, people are digging with shovels and their bare hands to find their loved ones. But it's a race against time. 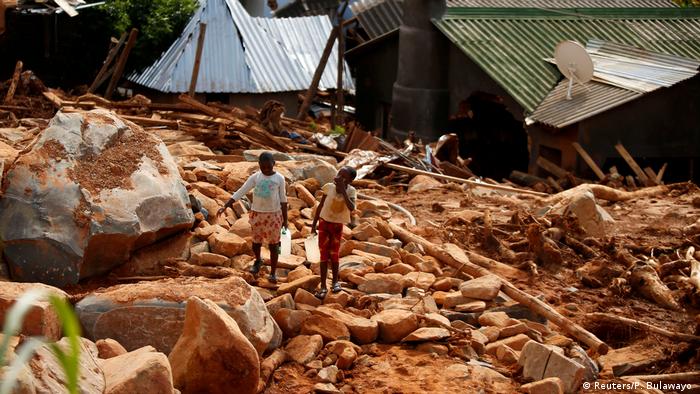 Sarudzai Kaneta's hopes are fading. The Zimbabwean woman is still searching for her brother Elisha, her sister-in-law and their child. For Kaneta, finding them alive is not that likely. Since Cyclone Idai hit the country on March 16, more than 300 people are still missing in Chimanimani district, the Zimbabwean government said. Among them, Kaneta's family.

The South African government has begun deploying sniffer dogs to help with the search for the missing, the state-run Herald newspaper reported. And although Kaneta has begun to accept her brother's and his family's death, she finds comfort in hoping that she can at least put them to rest in peace.

"We hope the dogs will make us able to provide a proper burial for our relatives, instead of having this pain in the chest that I have my relatives missing," she told DW.

"There are no graves to account for them. At least if I bury them, that is better than just disappearing. They should rest properly, even though I will not see or talk to them again."

Kaneta isn't alone in her search for loved ones. More than two million people have been affected by Cyclone Idai in Zimbabwe, Mozambique and Malawi.

Everywhere, people have been using shovels, hoes or pickaxes to dig where they suspect that their relatives might be trapped. That has not been easy since rocks abound in most of these areas.

The cyclone reshaped the landscape; powerful waterfalls now rush down mountainsides that once were covered with pine and eucalyptus trees.

In some of the areas, the smell of death led people to bodies covered by rocks and mud. 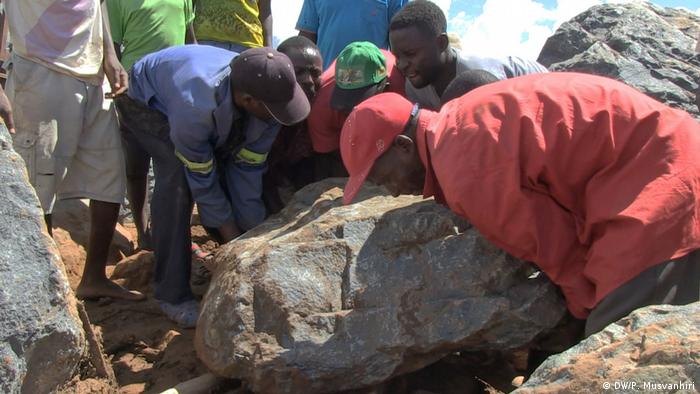 In Kopa Rusitu Valley, more than 300 people are missing and believed to be buried under rocks and mud

In Kopa Rusitu Valley, an entire township is now buried under rocks.

Thandiwe Mandizha is mourning the loss of three relatives: "I am pained by this loss. Why did God allow people to die this way?"

Her pain is worse because she cannot find her relatives, not even their dead bodies, she says.

"The bodies being discovered are only few. Most people cannot be found. A huge number of people are missing and we do not know where they are. We do not know whether they are buried under these rocks or if they were washed away down the river."

Tafadzwa Mapfumo lost five relatives in the same area. All she is looking for is closure. "We still have that feeling that they are surviving somewhere," she says.

Peter Chikwama is struggling with the same problem. He is still searching for his first-born son and three relatives.

"Some bodies are being discovered but the bodies are now beyond recognition. So we are appealing if they can assist that we have DNA test for our relatives rather than just have them buried unidentified," he told DW.

Zimbabwean Rudo Mukwada says five bodies were found in what used to be her garden. She recognized none of them as family.

"They must have been washed down here from somewhere," she assumes.

Finding bodies is now a daily occurrence. People keep shouting, informing others of another body found, another corpse that has to be carried away in a blue body bag, often unidentified.

A young boy works alone, wielding a small shovel with all his energy. He is looking for his father.

Others dig with their bare hands.

"There are bodies everywhere," Mukwada said, "so we just have to continue digging."

Mukwada herself was carried some 100 meters (328 feet) from her home. "It was as if I was flying in a plane, it was like a dream," she said. 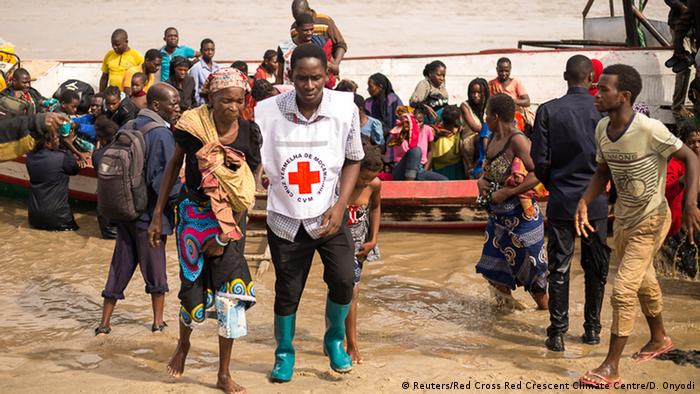 Survivors of Cyclone Idai arrive at an evacuation center in Beira, Mozambique

Survivors in the Zimbabwean village of Machongwe welcomed the first humanitarian aid from the outside world 12 days after the cyclone hit.

The village is one of many cut off since the storm made landfall, leaving its inhabitants without food or clean water.

Lucy Chidawu, a 34-year-old mother of five, clutches her rations while soldiers try to restrain the crowd that is pushing and shoving.

"It will only last a week at most. Hopefully the food will keep coming," Chidawu says. Many hungry people had resorted to eating guava fruits and cooking unripe bananas, she says. Residents are still coming to terms with how little of normal life remains.

'The city without roofs'

It's a similar situation in neighboring Mozambique.

'The city without roofs', that's what people now call the port city of Beira. People like Kelvin Fernando Vasco Da Souza are working hard. "The situation in Beira is very complicated," Da Souza says. "But we are working on rebuilding our houses so that we can lead a normal life again." 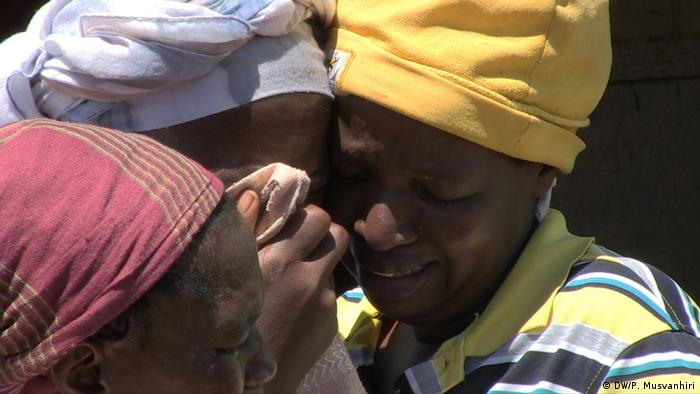 Amina Aly Joao Moteka, together with her family, is seeking refuge in Beira. The family travelled here from Buzi, some 60 km southwest of Beira. She is a secretary, her husband a chemistry teacher. In Beira, they haven't even managed to secure a spot in a tent.

Amina is dazed and frustrated.

"Our house is no longer standing," she says. "Everything was under water. We rescued ourselves in a school for four days. That was the only building that still stood after the cyclone. We have nothing anymore, no food, no home, nothing."

Those who can, take their fate into their own hands. Marcos Mourao covered 50 kilometers (31 miles) on foot. He was working in Buzi on a construction site when the cyclone came. When the water receded a little, he left. He has only a plastic bag with his documents.

"Now everyone is running away. There is nothing to eat," Mourao says. "We saw the helicopters and tried to get ourselves noticed, to give signals, but nothing happened. We survived. The bag is my life; I protect it like a baby."

Helpers talk of a race against time.  On Friday Mozambique confirmed 138 cholera cases in the city of Beira.

Doctors Without Borders and the Red Cross say that hundreds of people are being treated for diarrhea.

And although Zimbabwe and Malawi have been hit a little less hard than Mozambique, many people there are also still homeless.

This year's harvest has been destroyed, as large agricultural areas are still covered by water.

Aid organizations expect around three million people in the cyclone-affected region to be dependent on aid, with food aid necessary for at least one year.