Thousands of people remain without food or shelter days after the storm made landfall on the coast of Mozambique. As communities struggle with the scale of loss, neighboring countries have pledged humanitarian support. 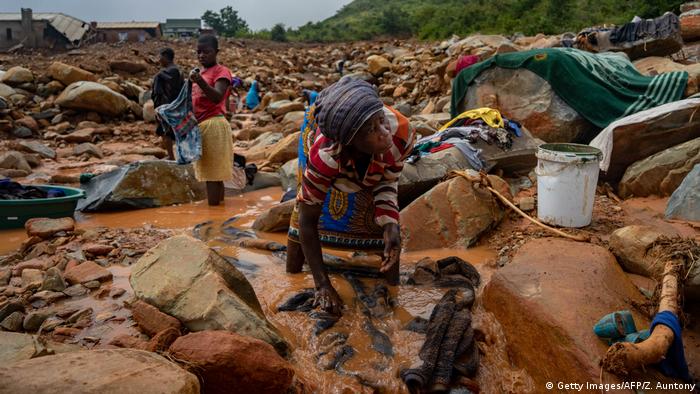 Communities in Mozambique, Zimbabwe and Malawi are counting their losses after Cyclone Idai barreled through southeastern Africa, leaving behind a path of destruction.

The full scale of the devastation will not be known until floodwaters recede, however the United Nations (UN) says it is likely to be one of the worst storm-related disasters ever witnessed in the southern hemisphere.

At least 2.6 million people have been affected by the storm, which caused severe flooding and landslides and destroyed thousands of hectares of crops. The floodwaters are still rising as torrential rain continues to hamper rescue and relief efforts, and it will likely take days for the inundated cities and plains to drain toward the ocean.

The current official death toll for all three countries combined is 354; however the overall death toll is likely to reach at least 1,000.

Mozambique is marking three days of national mourning for the victims of the cyclone. The current death toll is at least 200, although officials expect this will rise significantly.

The coastal city of Beira was particularly hard hit, with up to 90 percent of all infrastructure destroyed by the storm.

The emergency response manager for Save the Children in Maputo, Deizi Sitoi, told DW that getting necessary aid into the flooded city has become a logistical nightmare for aid agencies.

"The roads are not accessible, so it really is a challenge to get into Beira," she said. "Getting the supplies in is really difficult." 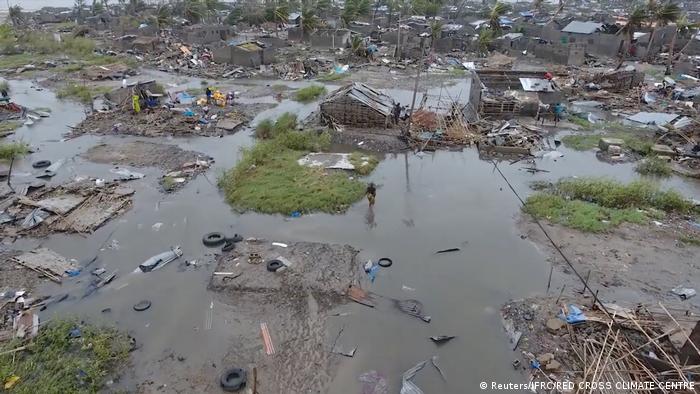 Up to 90 percent of the coastal city of Beira in Mozambique was wiped out by the cyclone.

Mozambique's Minister of Land, Environment and Rural Development, Celso Correia, told reporters on the ground that the rescue operation would continue to unfold over the coming days.

"Rescue teams are preparing to fetch people stranded in flooded areas and islands to bring them to safe areas," he said. "We have enough medicine, but the big challenge is access. We are now using boats and helicopters. Once we have access, our work will be easier."

Meanwhile, bus drivers in the capital Maputo are lamenting the fact that they have no passengers.

"I had 14 passengers for Quelimane, but I had to drop them in Chope," one bus driver told DW. "There is no access to the city of Beira. Since Friday there has been practically nothing to do."

Analyst Tagir Suleimane believes Mozambique's poor infrastructure played a role in the scale of the disaster.

"Some of our infrastructure was built 50 or 60 years ago when technology was not very advanced," he told DW. "We have better access to technology now, but things are not happening as they should."

In Zimbabwe's mountainous Chimanimani district on the eastern border with Mozambique, dozens of people were killed by landslides. However, officials say as many as 300 people may have died, with some bodies likely having been swept down the mountainside towards Mozambique.

At an emergency relief center, Chipo Dhliwayo, who lost two children in the disaster, sits and gazes into the distance. Her daughters were only four and eight years old. She cradles her six-month-old baby, who survived. Like many in the community, she is struggling to cope with the loss.

"Our house collapsed while we were asleep," she told DW. "My two children died. I am only left with this one — this infant I am holding in my hands. This is a big blow and I do not know how I am going to get over it."

Questions have already been raised over inadequate disaster management. However, Brigadier General Joel Muzvidziwa, a commander of the army units sent to carry out rescue operations, stresses that nothing could have prepared this community for a natural disaster on this scale.

"The magnitude of what happened was unimaginable," he told DW. "The major challenge initially was the weather. If we could have flown in more helicopters in time, it [would have been] much better." 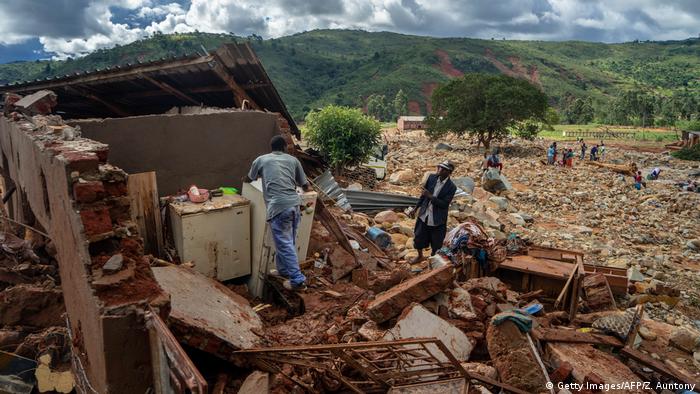 Residents in the Chimanimani district in Zimbabwe begin to clean up after a landslide destroyed many houses.

Rescue efforts were hampered by the destruction of roads and breaking down of communication. Bridges have been washed away completely, leaving most parts of the affected areas inaccessible. Ongoing poor weather conditions meant helicopters were also unable to fly.

The first group of patients classified as critical was airlifted out of the disaster zone on Tuesday. Themba Dhliwayo is one of the doctors volunteering his time to help treat patients.

"We have had patients with head injuries from being crushed [by] stones or from having houses fall over them," he told DW. "Some have fractures, broken limbs and arms."

Although the effects of the cyclone will likely be felt in the Chimanimani district for a long time, citizens have rallied to offer assistance to those worst affected.

"When you see others are in an emergency situation and people have died, as a neighbor country you have that responsibility of helping," said Tanzania's Deputy Health Minister, Faustine Ndugulie.

Chairperson of the African Union Commission, Moussa Faki, says the organization will provide $350,000 (€308,000) in immediate support to affected countries. The European Union (EU) has already released €3.5 million in emergency aid and a planeload of aid from the United Arab Emirates was scheduled to arrive in Harare on Wednesday.