On Thursday, the US ambassador in Beijing said China's currency was a major concern not only in the US. Earlier this week, a bill to threaten China with punitive duties if the yuan did not rise was put to the US Senate. 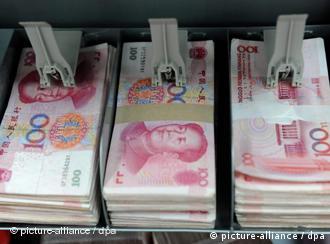 Fresh renmimbi notes - Beijing insists the currency is not undervalued

When the global financial crisis began, China pegged the renminbi to the US dollar, ending a phase of comparatively flexible exchange rates.

Beijing has kept the value stable ever since.

Between 2005 and 2008, China allowed the renminbi to appreciate by about 20 percent against the dollar, but when the credit crunch hit, policymakers wanted to prop up Chinese exports and thus revive the economy.

Yuan "a significant part of the problem"

Now, China’s economy is growing at a rapid rate again, but this cannot be said of the US’. Therefore, some US politicians are crying foul, arguing that Beijing is keeping the yuan artificially low. They say that Chinese exports get an undue advantage this way, as the US trade deficit with China keeps growing. 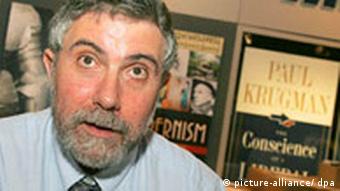 Paul Krugman, a US economist and Nobel laureate, explains that "not all of our problems would go away if we didn't have the undervalued renminbi but it's a fairly significant part of the problem. If we get some change in Chinese currency policy, it will help the world."

Some experts and politicians in the US say that the yuan is undervalued by up to 40 percent.

China argues that stable yuan has helped world out of crisis

China, on the other hand, claims that the stability of the yuan has actually benefited the world's economy and helped it recover from the financial crisis. Beijing says US leaders are just looking for a scapegoat to divert attention from weaknesses in the American economy.

It is hard to tell whether a stronger yuan would automatically boost American exports to China and reduce the trade imbalance. Economists who are skeptical of this argument point out that exports to China have actually developed despite the strong yuan, and that bilateral trade is so closely interlinked that often the same product travels back and forth.

"China was the number one growth area for US exports. So if the US is going to export anywhere, and companies want to see more growth in their exports, that's going to China. Now it's probably going to China for final assembly, and then it comes back to the United States. But that's what a lot of China's exports are. They call it the workshop of the world, but in many ways it's still the assembly center of the world," points out David Zweig, an expert on China's international relations at the Hong Kong University of Science and Technology. 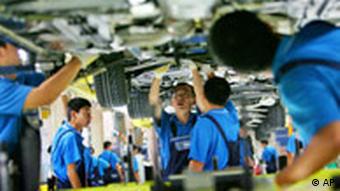 China is called the workshop of the world

However, this week not only the Americans, but also the World Bank and the International Monetary Fund have said the yuan is "undervalued" and Horst Löschel, a finance expert at the China European Business School in Shanghai, thinks that China will have to react to the international community’s demands eventually.

"The pressure on China is quite strong right now. Sooner or later there will be an appreciation of the yuan. Based on past experience, however, I don't expect it to be more than 5 percent within 2010."

Most observers agree that the Chinese and US economies have become so interdependent that it makes little sense for either side to continue their squabbles over the exchange rate.

At the beginning of spring every year, the Chinese capital appears to be in a state of emergency for the 10 days the National People's Congress is in session. (05.03.2010)

With Germany suffering its worst recession since World War II, booming exports in China have given the Asian economy the global edge. But Europe’s largest economy is showing signs of improvement. (09.02.2010)

Is there a danger that China's economy is overheating? Thomas Baerthlein asks Doris Fischer of the German Development Institute whether the concerns are justified