With Germany suffering its worst recession since World War II, booming exports in China have given the Asian economy the global edge. But Europe’s largest economy is showing signs of improvement. 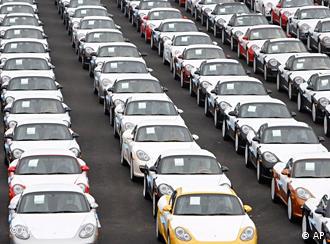 Germany had held the title of global export leader since 2003, when it surpassed the United States.

Despite the drop, Europe's biggest economy showed its first year-on-year increase since the global economic crisis struck in the fall of 2008. Exports in December recorded their fourth consecutive monthly gain and were 3.4 percent higher than in December 2008, a sign that recovery is underway, according to economists.

"The trend in foreign trade is still clearly upwards and contributed positively to economic growth in the fourth quarter," said Simon Junker, an analyst at Commerzbank.

The German economy shrank by 5 percent last year, but the government has predicted a growth of 1.4 percent in 2010. The country relies heavily on EU trade, which accounted for 62.7 percent of its exports last year.

"At least there is one reliable source of growth," said Carsten Brzeski, a senior economist at ING. Though the recovery may have slowed late last year, Brzeski stressed the overall picture was more positive than it seemed.

"Today's numbers highlight once again that the German economy can almost always rely on a helping hand from the export sector," said Brzeski. "The road might be bumpy but it is the road to recovery and not a dead-end street."

A new government report says Europe's largest economy will expand more than expected this year. However, officials in Berlin warn that it is not all good news and that unemployment figures could still rise. (27.01.2010)

Increased exports are the cause for Germany's second consecutive quarter of economic growth. (13.11.2009)