Robots in hotels are on the rise — whether at reception desks or in room service. A trend that has also now reached a holiday hotel on a mountain pasture in Austria's Salzburger Land region. 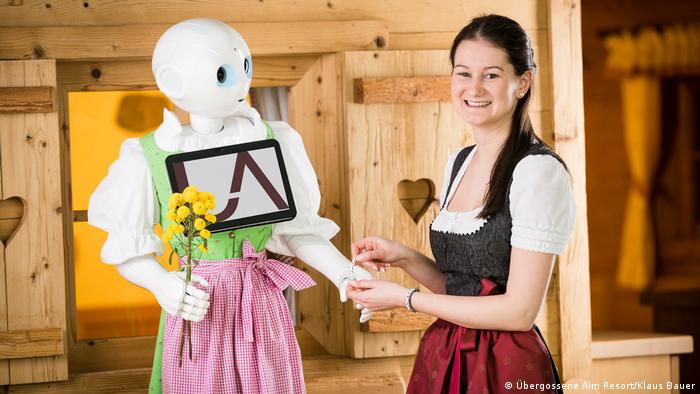 Pepper the robot wears a traditional Austrian dirndl dress. Since the end of February, she has been greeting guests as they arrive at a wellness hotel called Übergossene Alm Resort in Dienten, at the foot of Mount Hochkönig. This is the first hotel in the Salzburger Land region to employ a humanoid robot.

Pepper can recommend excursions and events and also has holiday tips for visiting guests. According to hotel management she also has a few tricks up her sleeve to entertain old and young guests alike. 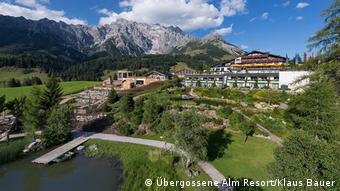 The Übergossene Alm Resort at the foot of the Hochkönig peak

The village of Dienten is located at the foot of the Hochkönig, which with nearly 3,000 meters (9,650 ft.) is the highest peak in the region.

The 800 inhabitants of the village like things to be cozy, tranquil and traditional. That this form of digitalization could take away jobs is not something that worries Wolfgang Burgschwaiger, the owner of the four-star superior hotel. "In future these robots will not replace my staff," says Burgschwaiger. "Quite the opposite," he adds: "Our trainees will be in charge of feeding their cheeky robot colleague in a dirndl dress with interesting information."

The robot model Pepper has already been used since 2016 to greet and help check-in guests on the cruise ships "Aida Prima" and "Costa Diadema."

The Japanese are trailblazers when it comes to using robots in tourism. In Sasebo, the Henn-na Hotel, or Weird Hotel as it would be called in English, the first robot-staffed hotel opened in 2015. It is located in the Huis Ten Bosch theme park in Nagasaki.