As climate change concerns grow, a new survey has found most Germans support raising flight prices and other measures to protect the planet. The Greens are currently polling on par with Angela Merkel's conservatives. 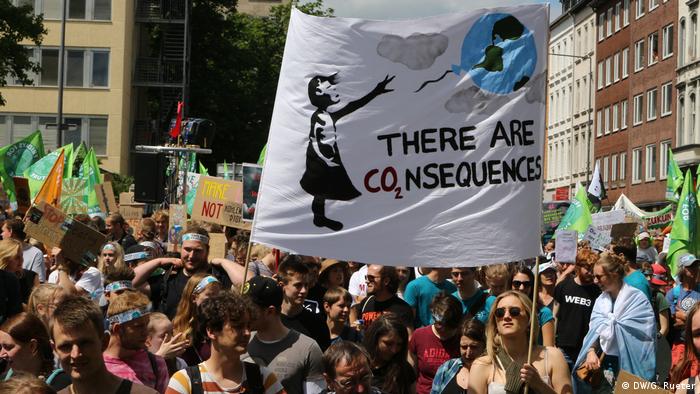 A majority of people in Germany support taking drastic steps to combat climate change, according to a survey published on Thursday.

More than 70% of participants in the Deutschlandtrend opinion poll for public broadcaster ARD by Infratest dimap said they think raising prices on flights makes sense.

Some 60% said they support getting rid of combustible engines in cars, while 97% backed expanding renewable energy.

But there still appears to be strong resistance to introducing a carbon tax, with only 35% of participants behind the measure.

Concern over climate change has been growing in Germany, particularly in the wake of the latest heat wave in July which saw record-breaking temperatures across Europe.

As a result, the Green party has seen a boost of support and is currently polling at 26% with voters, according to the poll.

The environmentalist party is now currently tied with Chancellor Angela Merkel's conservative CDU/CSU bloc, which rose to 26% of support this week.

Russia more trustworthy than US

With Boris Johnson becoming the UK's new prime minister and with the United States pressuring Germany to take part in a naval operation in the Persian Gulf, many survey participants said the countries are not good partners for Germany.

Only 37% of participants said the UK was trustworthy, dropping sharply from a previous survey in February.

Russia and the US both ranked low, although respondents said Moscow is more trustworthy than Washington — with 28% saying Russia is trustworthy, compared to 19% for the US.

US President Donald Trump has repeatedly criticizing Germany for its defense spending, and Deutschlandtrend also asked what respondents thought about increasing funding for Germany's military.

Boosting funds for the Bundeswehr was backed by respondents who support the business-friendly Free Democrats (FDP), the center-right CDU/CSU and the far-right Alternative for Germany (AfD).

Opposition to the move came from respondents who support the center-left Social Democrats (SPD), the Greens and the Left Party.