Moscow starts work on highway through nuclear waste site | Europe| News and current affairs from around the continent | DW | 24.03.2020

Preparation for the construction of a controversial road in the Russian capital has kicked off. Activists say it could send radioactive dust into the air and river. But the authorities are pushing on with the project. 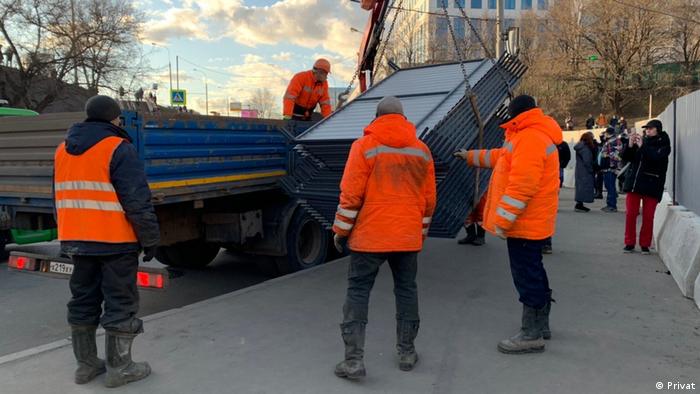 Residents film on their mobile phones as an excavator broke ground to prepare the construction site. They film through the shoulders of a row of police officers, pointing out that no one is wearing protective clothing for work on a nuclear waste site. "These comrades are protecting us from the radiation," says one woman sarcastically about the officers. "Just wonderful."

Behind the police line is a factory that produces military equipment. The onetime Polymetals factory used to extract thorium and uranium from ore and dump radioactive waste here in the 1950s and 1960s, before this spot became part of the territory of the capital. The site stretches along the sloping banks of the Moskva River, with the popular Kolomenskoe park on one side and residential apartment blocks on the other.

Since January, Sergey Vlasov has been one of around 50 local activists standing guard at the site around the clock to prevent construction.

Vlasov is an elected deputy in the municipal council of the Pechatniki district across the river, and he also worries about representing his voters. There have been several protests against the highway, which demonstrators have call the "Road to Death."

Another local resident, Anna, whose windows look out on the nuclear waste dump, says the project is "scary" and complains that the police officers here are essentially "acting as security guards for the bridge building company."

Killing two birds with one stone

According to city authorities, the planned highway and flyover will help with Moscow's chronic traffic problems by connecting districts and helping free up the city's main ring road. In an official blog post Moscow's mayor, Sergey Sobyanin, wrote in January that although the highway is no "panacea," there are "no logical alternatives" to it.

He did, however, admit for the first time that the area is contaminated. Sobyanin insists that construction of the highway will "solve two problems at once" by "radically improving the transportation situation and eliminating a radioactive dump." 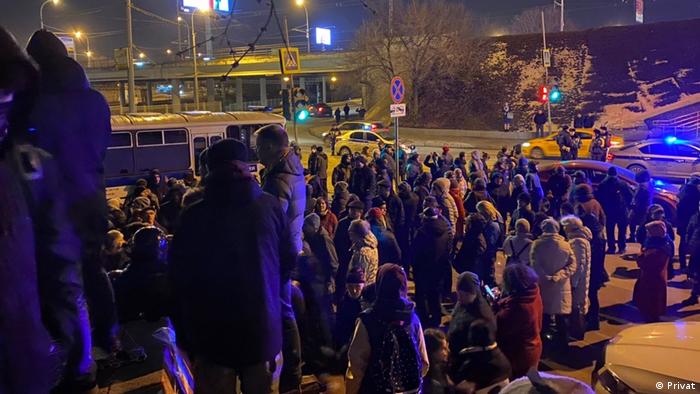 On the other hand, the city authorities have repeatedly insisted that the actual highway will not cut through the nuclear waste itself. On its website the city planning department explains that the current work is merely preparation for construction, and that they will only begin work on the flyover after "positive results" confirm that the area is clean.

But the cleanup is difficult. The government agency in charge of it, Radon, has been removing contaminated soil from the site for years to prevent slippages. In an agency publication from 2006, Radon's chief engineer for Moscow, Alexander Barionov, said that the hilly location of the site would make a full cleanup tough. "One incautious step, and radioactive soil gets into the river."

Rashid Alimov from the Russian branch of Greenpeace thinks authorities should not be digging in the area without having carried out a full ecological evaluation of the site. "We don't really even know to what extent the company, Radon, understands where exactly the nuclear waste is and how deep it really is in the ground."

The authorities did check the area ahead of the decision to build. But Greenpeace insists they were too superficial, and the group is taking the city to court to get that evaluation declared invalid. "Our position is that this place should have officially been declared a nuclear waste dump," Alimov says. Greenpeace carried out its own tests with an external company in October and found that radiation in several samples from the area is "above the permissible norm" and that building work should not be carried out there.

Alimov also points out that the government is contradicting itself. He cites a 2017 report from the official Russian consumer watchdog Rospodtrebnadzor on the "sanitary and epidemic" conditions in Moscow, which stated that there were 60,000 tons of nuclear waste by the former Polymetals factory. "That's a very inconvenient number for Moscow authorities now," he says.

Keeping up the fight

But many local residents seem to feel that the work being done ahead of building shows the authorities will most likely go ahead with their plans no matter what. Still, even after the excavators arrived, they were as determined as ever to stand their ground, despite the high police presence at the construction site. 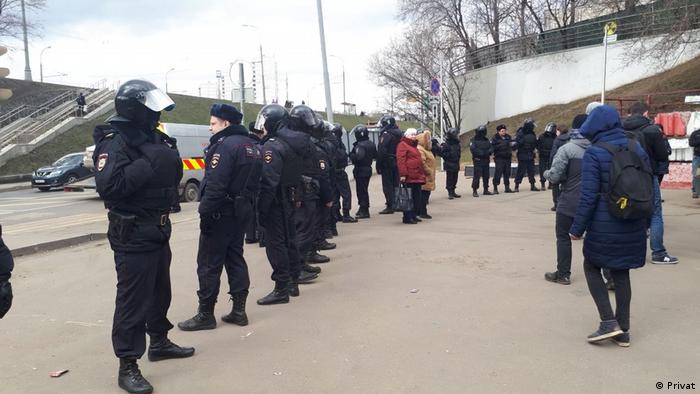 Police presence near the site has been high, leading to standoffs between police and residents

Local politician Vlasov thinks the authorities are trying to scare the activists. "They are trying to make us sit tight and keep quiet. At the moment, all the actions of the mayor's office aim to hush this up," he says. "But we will keep trying to attract attention to this situation."

Authorities have opened a criminal case against several activists for apparently damaging a radiation monitor on the site. And there were several standoffs between protesters and police last week. On Thursday, over 60 activists were briefly detained.

Vlasov says that since the arrests the residents have been regrouping. They may have to call off their shift duty at the construction site, he says. But just like Greenpeace, they are hoping to take authorities to court over the highway plans.

"Of course we will keep fighting," he says. "We plan to take this case to court — even though no one really believes we can win."

Coronavirus: How is the disease affecting DW's correspondents?

As life as we know it grinds to a halt, from large metropolises to tiny villages, we asked our correspondents to share their personal impressions of living under the coronavirus cloud. (19.03.2020)