Egypt's deposed Islamist president Mohammed Morsi has appeared in court in Cairo on espionage charges and conspiring to commit terror attacks. It's one of four trials against Morsi. 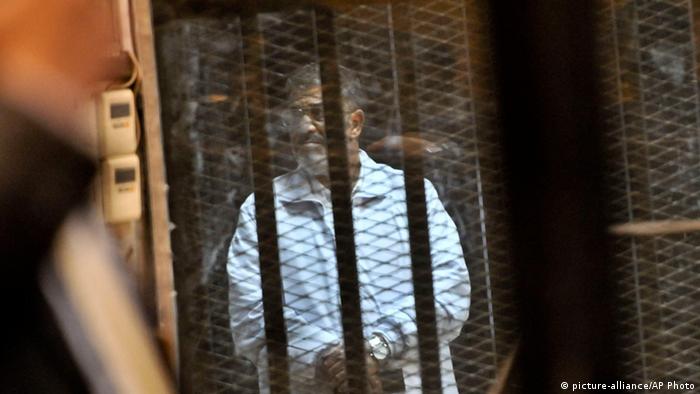 Morsi and 35 others, including former aides and members of his Muslim Brotherhood organization, are accused of spying and working with international groups, including the Palestinian Hamas movement, to carry out terror attacks in Egypt.

The defendants could face the death penalty if found guilty during the trial, which opened on Sunday.

Morsi was ousted by the army on July 3 last year following mass protests calling for him to step down. The latest case against him is part of a government crackdown targeting Morsi and his Islamist supporters. More than 1,000 people have been killed since his removal from power.

The man who became Egypt's first democratically-elected president in 2012 faces three other trials. Two of those are already underway, including one over Morsi's alleged involvement in the killing of opposition protesters in December 2012, and another on charges of escaping prison amid other jailbreaks that occurred during the 2011 uprising that toppled his predecessor, Hosni Mubarak.

Morsi will also face a fourth trial on charges of defaming the judiciary. A date for that trial has not yet been set.

Egypt's caretaker regime has listed the Muslim Brotherhood as a terrorist organization and initiated a broad crackdown on the group. The interim government has ordered the arrest of hundreds of senior Brotherhood officials since the July coup.

In his most recent public appearance, at the start of his second trial in late January, a defiant Morsi questioned the trial judge's authority, asking Judge Shabaan el-Shami to identify himself. The trial was adjourned to give lawyers more time to examine files, and is due to begin again on Saturday.

In his previous appearance, Morsi insisted that he remained the country's legitimate president and challenged the legitimacy of the court, regularly interrupting the judges and prosecutors.

Egypt has formally declared the Muslim Brotherhood a terrorist organization. Authorities have blamed the Brotherhood for recent militant attacks in which several people have died. (25.12.2013)