The second trial of Egypt's ousted Islamist president Mohammed Morsi has been adjourned until next month, according to state television. Also facing trial were 19 other defendants, including Muslim Brotherhood members. 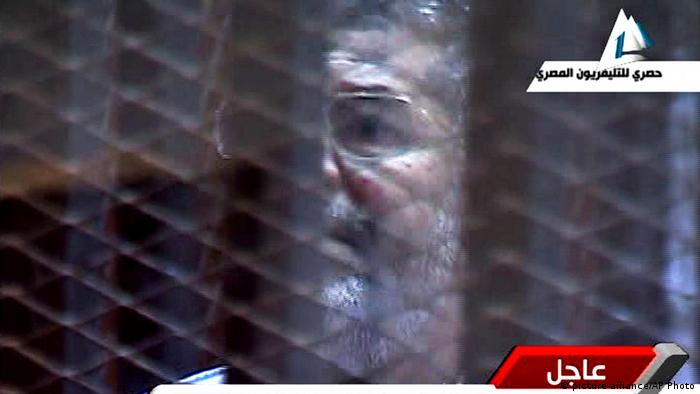 Egypt's ousted president Morsi paced a glass-encased cage and loudly questioned a trial judge's authority at the start of a new trial in Cairo on Tuesday. State media say the case was adjourned until February 22 to allow lawyers time to examine files.

Almost simultaneously on Tuesday, sets of gunmen killed a top interior ministry official in Cairo and a policeman guarding a church west of the capital.

The outlawed Brotherhood denies any links to suspected Islamist militants involved in an increasingly potent insurgency against Egypt's military-backed government.

General Mohamed Saeed, who was head of the interior ministry's technical department, was shot in his car outside his home early on Tuesday.

The trial, the latest against Morsi since his ouster last July in a popular coup, stems from 2011, when more than 20,000 inmates - Morsi included - broke out of Egyptian prisons during a popular uprising against then-president Hosni Mubarak.

Morsi, who already faces three proceedings based on other charges, angrily questioned the court's head, Judge Shabaan el-Shami, saying, "Who are you? Tell me."

The judge replied: "I am the head of Egypt's criminal court."

Prosecutors in the latest case allege that in 2011 Morsi and other leading Brotherhood members committed acts aimed at "terrifying the public and spreading chaos."

In court on Tuesday alongside Morsi were 19 other defendants. A further 110 accused, including members of the Palestinian militant group Hamas and Lebanon's Hezbollah, were being tried in absentia.

The hearing was held at a police academy in eastern Cairo.

As Morsi appeared, his supporters clashed with police in central Cairo while marking the third anniversary of the most violent days of the 2011 uprising that eventually led to police withdrawals from the streets.

Gunmen shot dead a policemen guarding a church in Cairo on Tuesday, and wounded two others, security sources said.

Presidential elections will be held before parliamentary polls in Egypt, in a change from the country's transitional plan after last year's military coup. The announcement came after dozens were killed in clashes. (26.01.2014)