Morocco faces renewed protests after two men die in abandoned mine | Middle East | News and analysis of events in the Arab world | DW | 31.12.2017

Anger and demonstrations have spread across Morocco after two people were killed while extracting coal from a shuttered mine. What are protesters demanding, and will the government respond? 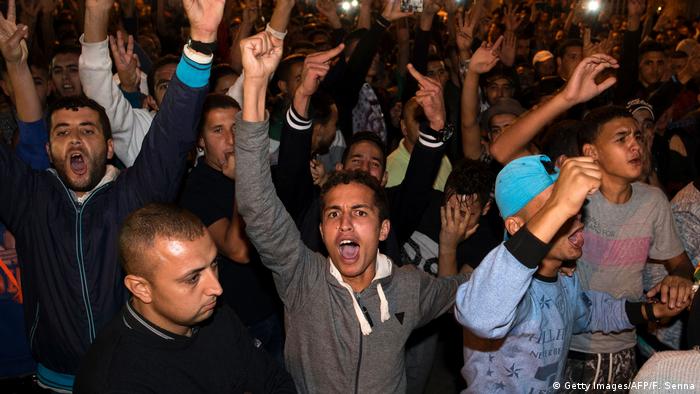 Jerada is a small town in northeastern Morocco located some 60 kilometers (37 miles) from Oujda, Morocco's largest city; before December 22, it was not well-known even domestically. But on that day two young men, aged 23 and 30, were killed while extracting coal from a mine, and the nation's eyes have been on Jerada ever since. The young men's deaths sparked an outpouring of anger in the former mining center to such a degree that the villagers originally refused to bury the two victims. Their funeral turned into a demonstration of more than ten thousand people – in a town with a population of just 45,000 people. 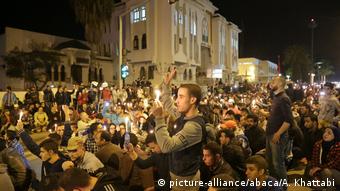 A silent march and candlelight vigil for Fikri

The protests in Jerada were seen in the Arabic media as being similar to the Harak al-Rif, or "rural mobility," protests that occurred after the death of the fish seller Mouhcine Fikri, who was crushed to death in a garbage truck in October 2016. The rural mobility demonstrations led to many arrests, including protest leader Nasser al-Zafzafi, who is still in prison.

Deutsche Welle spoke with Moroccan journalist Rachid Balghiti about how the protests in Jerada compare to those after Fikri's death and how the Moroccan state might respond. Balghiti told DW that the crisis in Jerada actually dates back decades.

In the 1990s a large mine there employed many people before closing and leaving many without work. The mine closure meant that people who used to work in the mine were forced to extract coal illegally and sell it to various groups across the country at a reduced price. 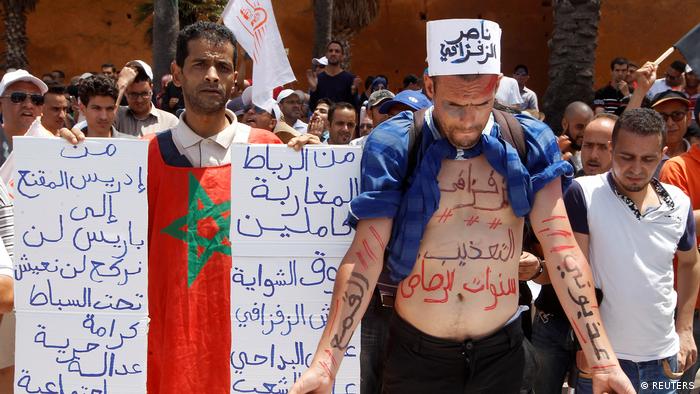 On December 28, around ten thousand people gathered in Jerada for an investigation of the deaths of the victims and punishment of officials. But their demands extended to financial compensation and a viable economic alternative to those put out of work since the mine closed.

Hisham Hamani, an activist involved with the demonstrations, told DW that the protesters want electricity prices to be lowered and the social agreement of 1989 to be implemented. The agreement between various trade union centers, which represented the miners in Jerada, was an attempt to find an economic alternative to the mine closure. In reality, however, the agreement has not been enacted since 1998, Hamani explained.

Balghiti blamed the state for the revival of the illegal mining activities, saying that "if the state itself is the one who closed the mine, which is the main supplier to the region, how do they give licenses to those who sell coal? They are the ones who revive these practices in light of the poverty and unemployment of the population," he told DW. "The state should be clear. If it needs coal, it must codify and secure the safety of these mining activities or else completely renounce coal as a resource, go to other sources of energy and therefore not give licenses to those who sell coal. Otherwise, the same problem will remain," he said.

Though the protests in Jerada were sparked by the men's deaths, the discourse has morphed into larger issues. Thousands of citizens have come together to call for economic development and the end of economic marginalization. However, the protests have not yet taken a similarly political tone to those that took place during the Arab Spring period, known as the February 20 movement.

The journalist Balghiti said the death of the two brothers is not the first of its kind. The region has been known for such incidents and the victims are not always miners. In one incident, a small girl became trapped in a well within the mine and died. Yet what prompted these demonstrations, according to Balghiti, was a "grave mistake" committed by the governor of the region: he tried to bury the bodies at night in secret in an attempt to quell anger and the possibility of a funeral procession or demonstrations. The residents, however, were enraged, surrounding the cemetery and the coffins of the dead and refusing to let them be buried without promises to address the villagers' complaints. 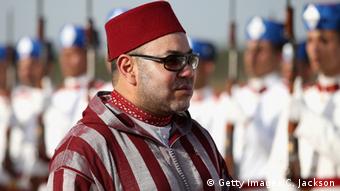 Has the state learned from its mistakes?

Abdel Ali Hami El Din, a leader of the Justice and Development party, told DW: "In different parts of Morocco are protests that call for improving living conditions, creating job opportunities and decreasing social marginalization, deep issues that Morocco has faced since the failure of the development paradigm that the country has followed since independence. The model has come to an end and must change.”

Whether the state or its head have acknowledged this unrest remains unclear. But the Justice and Development party leader said that "the king himself pointed to this in his last speech, and this is what should be done: to encourage and launch individual initiatives and economic openness to all areas of Morocco, not just the cities of the center, and give greater powers to elected institutions."

Referring for calls for King Mohammed VI himself to intervene rather than political officials, Hami El Din noted: "The king is responsible for the stability of the country and he is the guarantor of freedoms and rights, but he can not rely on everything that happens," but in the end "these institutions must be re-examined."

At least fifteen people have been killed in a Moroccan village after a stampede erupted as food aid was being distributed. Several women were caught beneath an iron barrier as hundreds scrambled to get hold of food. (20.11.2017)

The German parliament's upper chamber rejected a law that would have allowed quicker deportations to Morocco, Tunisia and Algeria. The decision deals a blow to Chancellor Angela Merkel's refugee strategy. (10.03.2017)

The Algerian dream of traveling to Europe

Berlin is under pressure to deport refugees from so-called "safe countries of origin" back to their homelands. But a country like Algeria has other challenges to overcome before it takes back its people. (20.02.2017)