Police have arrested two suspects with links to Turkey. The men are suspected of recruiting for the so-called "Islamic State" militant group, prosecutors said in a statement. 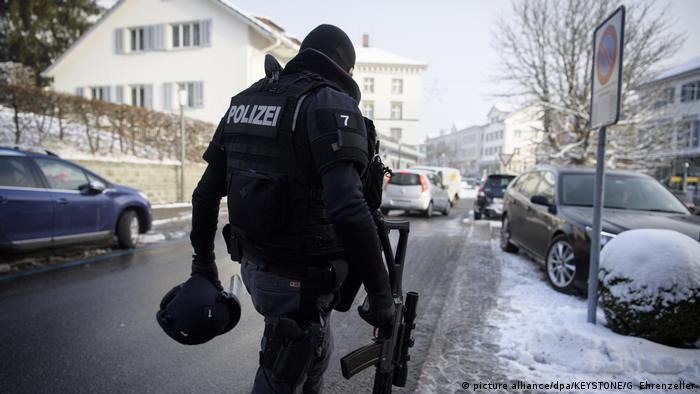 The domestic intelligence service has announced an uptick of hundreds in a matter of months. At least one cause of the worrying trend is the ease with which young people can become radicalized online, authorities said.

Swiss police on Wednesday arrested two men for suspected involvement in terrorist activities, including recruiting for the self-styled "Islamic State" or similar organizations.

At least 100 law enforcement officers staged several raids in the Italian-speaking region of Ticino (or Tessin to German speakers), according to the attorney general's office.

"The Office of the Attorney General of Switzerland is conducting criminal proceedings against two men, one with dual Swiss-Turkish citizenship and the other a Turkish citizen," prosecutors said in a statement.

The raids targeted several houses and a mosque, prosecutors added. The operation formed part of an independent investigation by Swiss authorities.

Although Switzerland is not considered a high-priority target for militant groups, Swiss authorities have launched probes into Anis Amri's possible links in the country.

In December, Amri drove a truck through a Christmas market in Berlin, killing 12 people and wounding dozens more.

Since 2001, more than 70 people have traveled to the Middle East from Switzerland to join militant groups, according to Swiss authorities.

Over the past two years, the EU has witnessed an increase in terrorist attacks of European soil, including Berlin, Paris and Brussels.

European officials and political leaders have called for increased cooperation across the bloc in a bid to tackle radicalization and the threat of terrorism.

On Saturday, German Chancellor Angela Merkel said the challenges posed by terrorism could not be confronted alone, adding that the phenomenon was not inherently linked to Islam.