Libya's second-largest city, Benghazi, has been wracked by more fighting between Islamist militias and troops loyal to a renegade general. Doctors say at least 18 people have been killed. Schools have been closed. 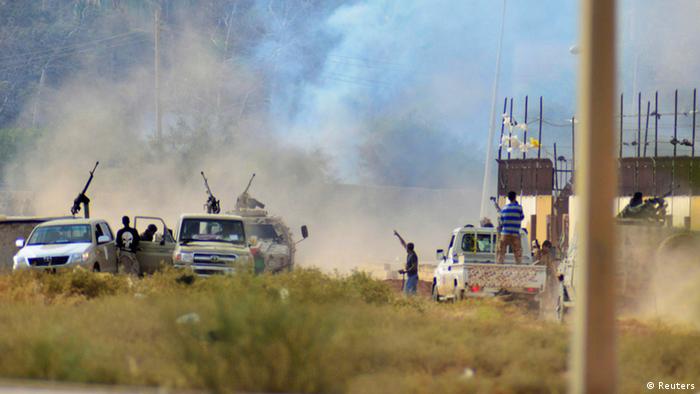 Hospitals called for blood donations in Benghazi on Monday as battles spread to four city precincts, leaving residents trapped in their homes by crossfire.

Doctors called on combatants to spare civilian lives and said the clashes had left another 70 people wounded.

Fighting was also reported in the town of al-Madj, east of Benghazi.

Gun battles flared from dawn on Monday when at least one of three Islamist militias in the area attacked a base of elite forces who support the renegade general, Khalifa Haftar, according to officials.

Fighting had started on Sunday when aircraft had targeted a compound of the Ansar al-Shariah militia. Officials said helicopters also bombed the base of the February 17 militia, also located on the western outskirts of the city.

As the fighting spread on Monday, anxious residents set up checkpoints in Benghazi's southern and southwestern districts to prevent rival forces from taking shelter inside their buildings.

Monday's fighting was the worst since 76 people were killed in mid-May.

That's when Haftar began an offensive, saying he wanted to purge Libya of militias he blames for three years of instability.

Libya is in protracted turmoil with a weak central government three years after the NATO-backed war that ousted Muammar Gadhafi, with Islamist, anti-Islamist, regional and political factions locked in conflict.

Haftar is a former Gadhafi-era army chief who spent time in exile in the United States.

Ansar al-Shariah has accused him of being an "American traitor" who was supported by Saudi Arabia and the United Arab Emirates.

The North African nation has been split since a revolution unseated dictator Moammar Gadhafi in 2011. But a truce has held, and hopes are high for a new unity government.