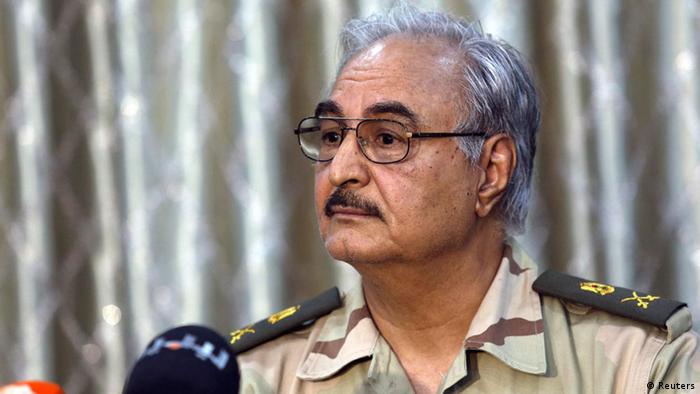 The official Libyan news agency, LANA, quoted a statement by the country's interior ministry Wednesday that it is backing rogue General Khalifa Haftar (pictured above).

The Reuters news agency, however, has reported that acting interior minister, Saleh Mazeg, told local television station al-Nabaa that the statement was wrong and that his ministry stood with "the Libyan people" and not with Haftar. Haftar, a former military chief of staff under Moammar Gadhafi who then went into exile in the US, has set up what he calls a "Libyan National Army" to "rescue" the wartorn country.

Haftar, who fought as a rebel in the war against Gadhafi, has said he wants to clear the country of Islamist militias.

Libya's government and army have failed to bring former rebels and militias in the country under control after Gadhafi's 2011 ouster. The country was left awash with weapons following the ouster and security remains poor.

On Friday, Haftar's forces launched their campaign against Islamist militias in the eastern city of Benghazi, the rebel stronghold during Libya's uprising. At least 70 people were killed in the attack.

On Sunday, his forces stormed Libya's parliament building in the capital Tripoli with anti-aircraft weapons and rocket-propelled grenades declaring the body suspended.

Libyan military units and commanders have made a series of loyalty pledges to Haftar over the past week. On Tuesday, Col. Gomaa al-Abbani, Libya's top air defense commander, backed Haftar in a televised address.