Fighting between forces loyal to a rogue general and Islamist militias in eastern Libya has claimed several lives. The clashes underline the fragile security situation in the country. 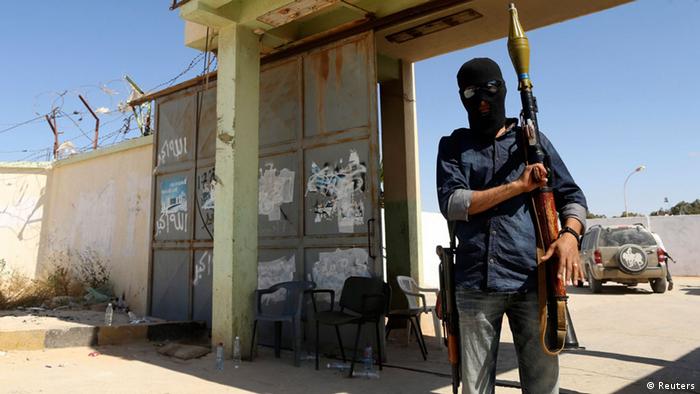 Libyan irregular forces backed by helicopters on Friday clashed with former rebel Islamist groups in the eastern city of Benghazi in fighting that left at least 12 people dead and scores wounded.

A spokesman for Haftar told Libyan television station Al-Ahrar that some regular military units joined Haftar's forces in the attacks, saying they now controlled the two bases. This has not been independently confirmed.

Libya's army chief of staff Abdessalam Jadallah al-Salihin told state television, however, that he had given no orders for any regular military units to attack bases in Benghazi.

He did admit that some officers and units from the regular army had joined Haftar's group.

Haftar is a former military commander who led ground forces in the 2011 uprising that toppled dictator Moammer Gadhafi. In February he appeared in an online video claiming to speak for the "general command of the Libyan army."

Militias out of control

The fighting underscores the government's struggle to rein in former rebels who helped oust Gadhafi.

After Gadhafi's ouster in 2011, Libya has seen an increase in the number of militias, which have taken advantage of the disorganized security situation in the country.

The government acknowledged the existence of "terrorist groups" in the country for the first time just weeks ago, and said it was mobilizing against them. However, with the military and police still in a state of disarray, it is waiting to take comprehensive action against the heavily armed groups, which have bastions in Benghazi and other eastern regions.

Friday's fighting marks the latest turmoil in Benghazi, where an attack on September 11, 2012, killed four Americans, including US Ambassador Chris Stevens.