More Arctic weather in a warming world? | Environment| All topics from climate change to conservation | DW | 11.01.2014

Icy cold in North America, storms along the Atlantic coasts, typhoons in Asia, spring temperatures in Germany: Does global warming actually mean a more capricious climate and even Arctic freezes? 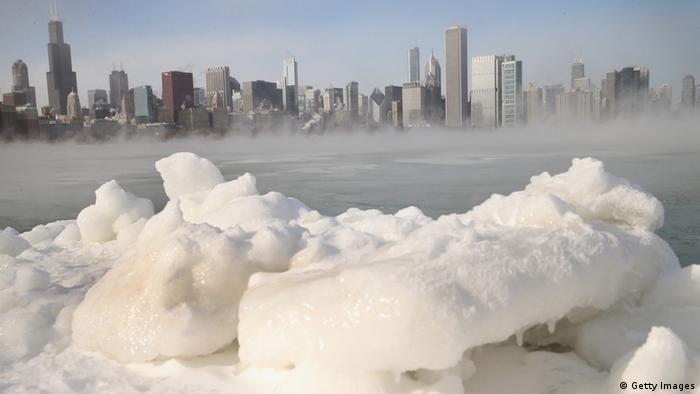 "What on earth is this kind of weather?" was a frequently heard refrain over the last few weeks. In Washington, London, or Berlin, people were experiencing all sorts of unusual weather. The US and Canada had some of the coldest temperatures in recent memory. London's Thames flood barrier was in action, while the nation's southern coasts were battered by storms and waves. Meanwhile, people in Germany were enjoying spring-like temperatures, with bushes in bloom, birds singing and bulbs pushing up through the frost-free ground.

After a record-breaking freeze in the US, even the sunshine states of Florida and California had reached minus temperatures by January 7th. Record cold was measured in at least 49 US towns and cities. Parts of Canada, which are used to harsh winters, were having problems keeping their power supply going after an unusually stark drop in temperature.

The weather experts say the extreme cold spell was caused by a mixture of strong winds from the north and changes to what is known as the "polar vortex". This refers to a large area of cold air swirling above and around the North Pole. Normally it is fenced in by the jet stream, a current of air which flows from west to east and normally transports the cold air from Canada to Greenland, Siberia and back to Alaska.

Under certain meteorological conditions some of this polar air in winter makes its way much further south. In this particular case, an area of high pressure in the western US met with a low pressure zone above the east of the country. This resulted in a strong north wind, bringing frigid air down from the North Pole.

At the same time, a high pressure zone over Siberia was also pushing large masses of Arctic air further south than usual. Weather experts describe what is happening as "waves" in the jet stream. Instead of flowing straight around in an oval-shaped area of cold air around the Pole, it moves in waves, allowing icy polar air to escape to the south.

Towards the middle of last week, an area of high pressure above the southeastern US pushed warm air from the Gulf of Mexico northwards. The Arctic air started to withdraw and temperatures increased again. 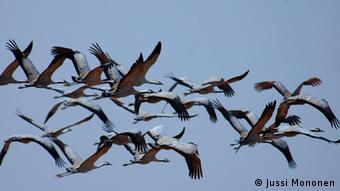 Meanwhile, on the other side of the Atlantic, temperatures have been more like springtime. These two contrasting weather patterns are not unrelated. The cold air from North America has been streaming out over the Atlantic, where the warmer ocean temperature warms it up. Resulting temperature differences between north and south then resulted in powerful areas of low pressure, which brought storms and flooding to the British Isles around the turn of the year and southwesterly winds to Germany, bringing unusually mild temperatures for the time of year.

It is impossible to say for sure that the unusual weather we have been experiencing is caused by climate change. Climate experts say they need records of a period of at least 30 years to draw conclusions about climate trends.

The US meteorology agency, NOAA, confirms, however, that the jet stream has become much more variable over the last five years. Only the future will tell if this is a natural fluctuation, or the result of a warming planet.

Climatologists have been warning for a long time that the rapid warming of the Arctic could result in cold periods in other regions. The decline of sea ice and snow cover towards the end of autumn are warming the ocean. The difference between temperatures in the Arctic and those at mid-latitudes, which help drive the jet stream, is getting smaller. Scientists say this could well be responsible for the the wavy patterns of the jet stream which play a key role in determining the weather. 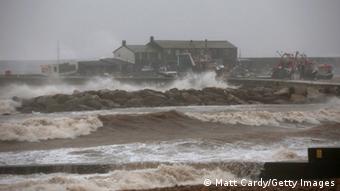 Storms and flooding are expected to increase with climate change

Dr. John Holdren, Director of the White House Office of Science and Technology Policy, said in a video posted on the White House Blog: "A growing body of evidence suggests that the kind of extreme cold experienced by much of the United States is a pattern we can expect to see with increasing frequency as global warming continues".

Holdren stresses that the extreme cold spell does not mean the planet as a whole is not warming, as some have suggested. The climate will always be subject to natural variability. Experts from leading research institutes, such as the Potsdam Institute for Climate Impact Research (PIK), expect the variability to increase as the Earth warms. The Intergovernmental Panel on Climate Change (IPCC) and the World Bank expect the number of extreme weather events to increase as the climate changes. PIK experts say the number of these events, including droughts, storms and flooding, has more than doubled in the last thirty years. That is a long enough period to convince scientists that this is the result of climate change.

As the North American East Coast experiences some of the coldest temperatures ever, DW takes a look at the factors that lead to this weather phenomenon, and why temperatures are unseasonably high in Europe. (08.01.2014)

The Arctic: a changing region

Although the 'Arctic 30' have now been released, Greenpeace says they will continue their protests against plans to mine the Arctic's oil and gas fields. DW has a closer look at some of the issues in the fragile region. (02.01.2014)

The 'polar freeze' has spread from the mid-west of North America to the east and south, leaving more than 20 people dead. All 50 states of the US - including Hawaii - recorded sub-freezing point temperatures. (08.01.2014)