The 'polar freeze' has spread from the mid-west of North America to the east and south, leaving more than 20 people dead. All 50 states of the US - including Hawaii - recorded sub-freezing point temperatures. 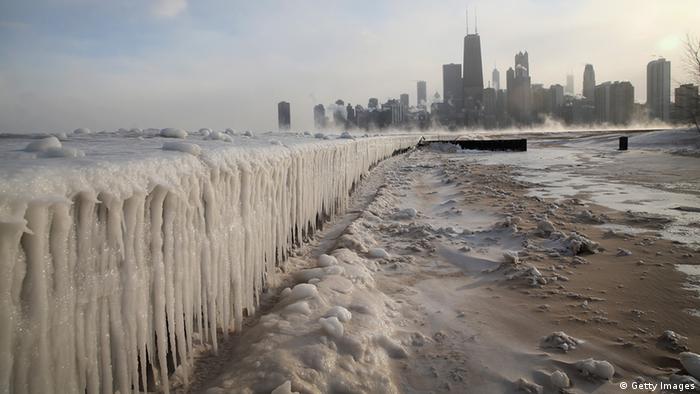 The big chill hit over the weekend, reportedly caused by a kink in strong winds surrounding the North Pole - also known as the 'polar vortex.' By Tuesday, the freeze had spread across North America, as predicted by forecasters, causing record-breaking temperatures in places unused to such cold.

The town of Embarrass, Minnesota, recorded the lowest temperature in the US on Tuesday, at minus 37 Celsius (minus 35 Fahrenheit). While that Midwest town has experienced colder in its history, new lows were recorded in the south - with Nashville, Tennessee posting temperatures of minus 17 Celsius. In the east, Chicago hit a record low of minus 24 C and the St Louis Mercury bottomed out at minus 25.5 C.

The wind in many areas ensured it felt even colder; the overnight wind chill factor in Toronto, Canada, made the temperature feel around minus 40 C.

The weather is expected to improve on Wednesday, but authorities say at least 21 people have been killed as a result of the plummeting temperatures since Sunday.

Among those left dead were two men whose boat capsized in Westerport, Massachusetts while duck hunting. Another died in a large avalanche outside the Colorado ski resort area of Vail, while there were four cold- and storm-related deaths around Chicago. Seven people died in Michigan alone, according to The Weather Channel.

Many schools and child care centers were closed around the country, while extra shelters were opened for the homeless and those needing refuge from the cold. More than 2,000 flights were canceled across the US on Tuesday alone, bringing the total since the cold snap to more than 11,000, according to US news agency AP.

The cold was even too much for Anana, a 14-year-old polar bear housed in Chicago's Lincoln Park Zoo. Without the layer of fat polar bears build in their natural environment, she remained mostly in her heated indoor enclosure.