As the North American East Coast experiences some of the coldest temperatures ever, DW takes a look at the factors that lead to this weather phenomenon, and why temperatures are unseasonably high in Europe. 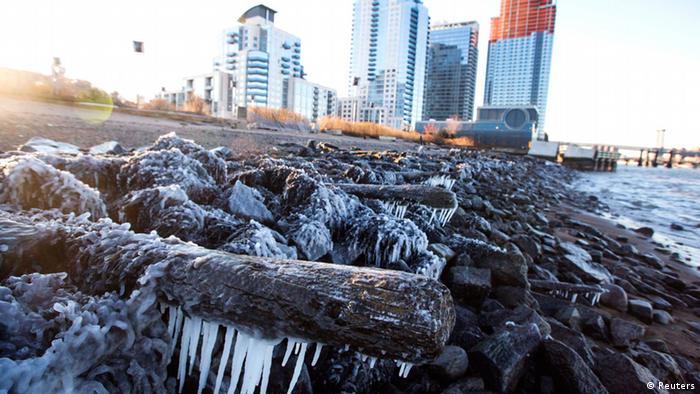 The weather is a result of the Earth's atmosphere's attempt to balance its energy - warm air travels from the equator, which has a surplus of energy, to the poles, which have an energy deficit, according to Andreas Bott, head of the Meteorological Institute at the University of Bonn.

Cold air also moves from the North and South poles to warmer parts of the planet. The extremely low temperatures being experienced in North America are actually a result of the attempt by the Earth's atmosphere to compensate for its energy deficit at the North Pole. But it's below -10 degrees Celsius (14 F) in Rochester, New York, while its 11 degrees Celsius in Bonn - even though the German city's higher latitude puts it closer to the Arctic.

The difference in temperature between Europe and North America is much larger than it tends to be at this time of the year. North America is currently doing more than its share of compensating for the North Pole's energy deficits - what is being called the polar vortex. 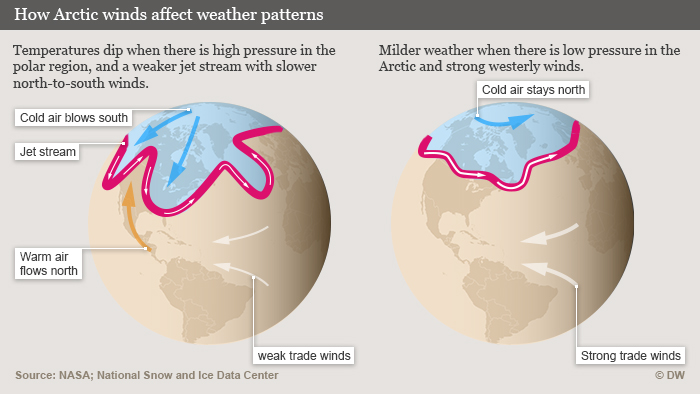 North America is experiencing the weather pattern on the left, while Europe enjoys the other one

How the polar vortex works

The "big freeze" in North America is actually due to a slow-moving depression, or trough, of a Rossby wave. The troughs and ridges of these waves carry wind around the world and generally have a speed rating of six or seven, with higher numbers representing faster moving winds. The current rate, however, is just four.

"Fewer waves means that the trough does not move," Bott explained. "It opens the gate for the Arctic wind in [North America]."

As air moves more slowly than usual from west to east along the Rossby wave, cold Arctic air continues to blow south, pushing down temperatures in parts of the US that are typically warmer in winter.

The same depression that keeps eastern North America frozen has also meant the warm air can continue to be blown from the Canaries into Europe - leading to spring-like temperature and high winds in England and France.

The birthplace of depressions

But there are other factors that pre-dispose the US to colder winters than most countries in Europe along the same latitudes.

"The Rocky Mountains are sort of a birthplace for the troughs of Rossby waves," Bott said, adding that the downwind side of the mountains triggers the depressions of Rossby waves.

The topography of the states east of the mountains only serves to intensify the effect. With no forests in the plains of the mid-western US, the ferocity of winds from Canada also increases. Europe on the other hand, doesn't have the topography to create a similar effect. The winds coming in from the north are from the sea and that leads to a maritime effect that leads to milder winters and summers.

The 'polar freeze' has spread from the mid-west of North America to the east and south, leaving more than 20 people dead. All 50 states of the US - including Hawaii - recorded sub-freezing point temperatures. (08.01.2014)

Parts of the United States are facing what could be the coldest temperatures in years. The cold weather and snowstorms have forced the cancellations of thousands of flights, while schools have been closed in some states. (06.01.2014)