Residents have been evacuated from homes in eastern Canada as the city of Montreal braces for rising floodwaters. Fears escalated after a barrier gave way west of the city, forcing thousands to flee to higher ground. 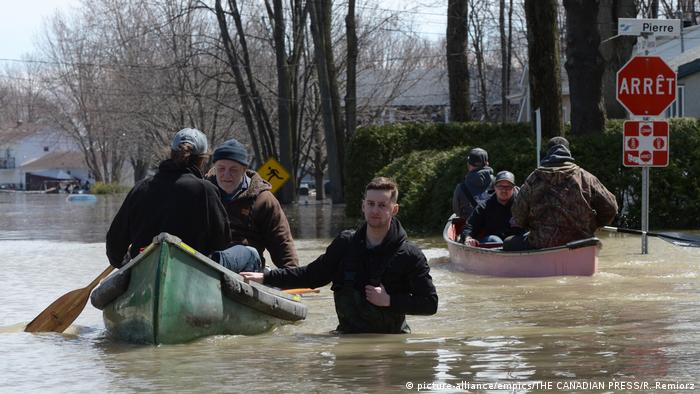 The eastern Canadian city of Montreal has declared a state of emergency as it braces for an inundation of floodwaters, which are not expected to reach their highest until Tuesday.

The situation had appeared to be stabilizing until a dike burst just west of the city on Saturday night, sending a surge of water up to 1.5 meters (5 feet) through the area.

By Sunday evening, some 9,522 people had fled for higher ground after floodwaters breached the barrier in Sainte-Marthe-sur-le-Lac, Quebec, forcing about a third of the town's residents to leave their homes at short notice.

"We didn't have time to do anything, the water rose while were chatting, I just had time to take my medication," one resident told public broadcaster Radio-Canada. Hundreds of police firefighters and soldiers helped with the evacuation.

As the evacuations took place, Prime Minister Justin Trudeau highlighted the need to make infrastructure that was "climate resilient."

The flooding across parts of the provinces of Ontario, Quebec and New Brunswick "highlights how important it is that we fight climate change, that we adapt and mitigate the impacts of more extreme weather events," he said.

Some 1,700 soldiers have been deployed to the worst-hit regions, with the cities of Montreal and Ottawa declaring states of emergency last week.

In Fredericton, New Brunswick, more than 400 households were flooded, and the main highway connecting the province to the rest of Canada was closed.

In Ontario, Canada's Globe and Mail newspaper reported that rising river water was expected to exceed 2013 levels that saw more than 1,000 permanent homes and another 1,000 holiday homes flooded.

There was a time when weather presenters were all about rain, sunshine and areas of high pressure. Now the climate is changing, so are their jobs. Many see it as their role to help raise awareness. (04.04.2019)