Monkeys slaughtered for meat market on Bioko | Environment | All topics from climate change to conservation | DW | 11.10.2013

Oil money has been flowing into Equatorial Guinea for two decades now, prompting inflation. On Bioko island, the price of monkey meat has soared, making it a status symbol that threatens the primates' existence. 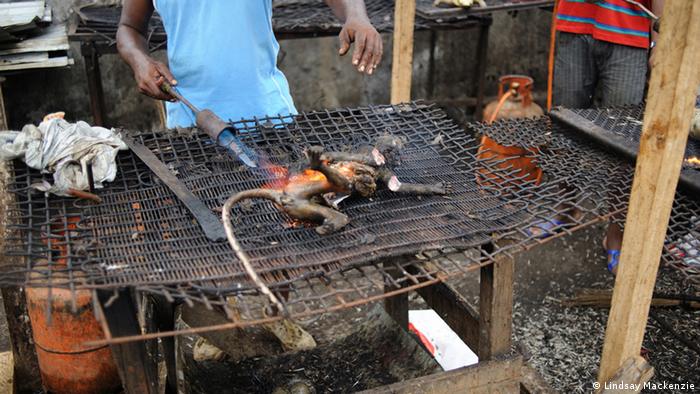 Charred monkey meat for sale at a market

Shoppers jostle amongst the stalls at a market in the capital city of Malabo, on Bioko Island. As the northernmost part of Equatorial Guinea, the island is 32 kilometers (20 miles) off the African coast. Oil money has been flowing into Equatorial Guinea for almost 20 years, making it the richest per capita of the Sub-Saharan African countries. For those who've managed to profit, there's no shortage of items on which to splurge. Vendors sell everything from music and football jerseys to traditional medicine.

Tucked away in the back corner is a line of men with blowtorches and machetes, standing over tables topped with metallic grates. They are preparing bushmeat - the meat of local wild animals - from giant rat to forest antelope.

A shopper waiting near the table says the blowtorch is used to clean the animals before they are sold. She says the meat is from the forest. Today she's buying pangolin, a cat-sized mammal covered in scales that resemble the outside of an artichoke. It costs 20 thousand Central African Francs, or about 30 euros ($40).

A monkey carcass has just appeared - the second one this morning. The carcass is charred black, but its face, long tail and slender fingers are unmistakably monkey. The vendors aren't thrilled to see foreigners. Outsiders can only stay for a few minutes before the man singeing the monkey meat makes a menacing gesture with his machete. 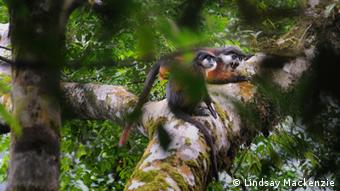 The Pennant’s Red Colobus is one of top 25 most endangered primates in the world. Only 5,000 remain

According to the Bioko Biodiversity Protection Program (BBPP) more than 240,000 carcasses have been sold over the past decade and a half. About a fifth of those were monkeys.

Drew Cronin, a biologist from Philadelphia's Drexel University, has been analyzing data gathered by the BBPP.

He said oil money makes it unnecessary for locals to eat bushmeat - but inflation is turning Bioko bushmeat into a status symbol.

"The inflation in Malabo from the petroleum industry has caused the bushmeat prices to go to a point where the average person cannot afford it," Cronin said. "The argument that you have on the mainland in West Africa, where people need this for sustenance, does not apply on this island. It's definitely a luxury item."

Bushmeat is commonly consumed in West Africa, but there is a ban on monkey meat. This is intended to protect the primates, but it's also a public health measure. Eating monkey meat can lead to the transmission of diseases between animals and humans.

Nevertheless, monkey remains a rare delicacy here. Cronin likens it to having a lobster dinner.

"There's definitely a status involved ‘look at what I've provided at this table,'" Cronin said.

Instead of deterring poachers, a ban passed in 2007 had the opposite effect. It turned monkey meat into a sought-after status symbol. Since the ban, the number of monkeys coming through the bushmeat market has increased.

"It went up to levels that were double to triple the number of primates that were being sold prior to the ban," Cronin said. "With no enforcement it had no effect." 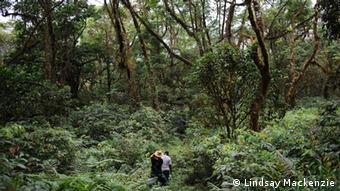 Volunteer scientists conduct a wildlife census on the island of Bioko, Equatorial Guinea

Bioko's monkeys are a rare sight these days - they have been hunted out across the island. A few populations can be found in the Gran Caldera de Luba Reserve - a remote area in the south.

This is where primatologist Katie Gondor does her work. On a visit to the forest, she squints in the direction of a flash of movement on a forest trail in the reserve. She whispers so as not to scare off the monkey.

"I couldn't really tell what it was, but when it moves quiet and slow like that, it makes me suspect it's a colobus." Gondor is collecting data for the Bioko Biodiversity Protection Program. A small group of young scientists - including both Americans and locals - walk carefully behind her. They are carrying notebooks, binoculars and GPS tracking equipment.

After a few false alarms - a squirrel, a parrot - they hit the monkey jackpot. Different species are sitting together in a tree on a cliff overlooking a river gorge. A family of black colobus is sleeping and munching on leaves.

When humans started hunting with guns the colobus' survival mechanism made it an easy target for hunters. The Pennant's Red Colobus is one of the most endangered primates in the world. Since the late 1980s, the population has been cut nearly in half. Less than 5,000 remain today.

Activists on the airwaves

There are people in Bioko who want to save these monkeys - and they are using radio to build a protection movement. Prospero Rivas and Antonio Manuel have created Bioko's first environmental radio program, broadcast every Friday on Radio Songa. Recent graduates of the National University of Equatorial Guinea, they encourage listeners to protect Bioko's unique flora and fauna. 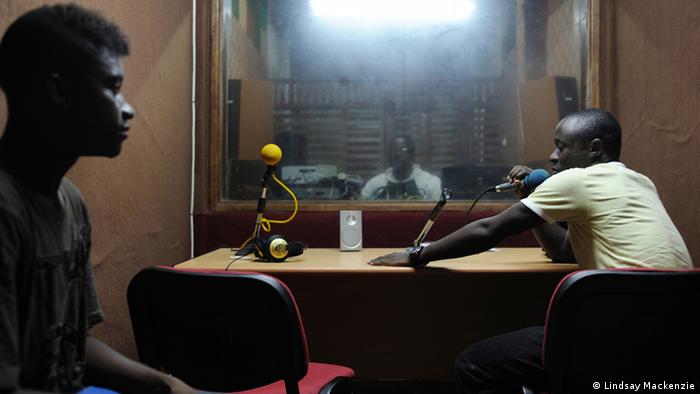 "We are leaving the environment almost empty," Rivas said. "We are eating - we are consuming - this biodiversity, without any kind of compassion. We were speaking about this in our programs. We want to preserve everything that is still left for as long as possible."

Manuel says that even though the radio show is only a few months old, they're already starting to see results.

"I was with my neighbors. And it sounds kind of crazy but they were like 'No we don't wanna keep eating red meat anymore,' and I was like 'Oh my gosh! Thank you!'" Manuel said. "A local saying they aren't going to keep eating bushmeat. I think it's great."

Although the pair's passion comes through on air, it remains to be seen if their message will create change fast enough to save the monkeys and other wildlife on Bioko.

With militia groups in Africa suspected of arming themselves through the illegal ivory trade, elephant poaching is not only causing concern among conservationists, it is also a security problem. (06.06.2013)

UN Secretary-General Ban Ki-moon says the slaughter and trafficking of endangered species represents a threat to national and regional security. Volker Homes of the WWF explains the dangers facing animals and rangers. (31.05.2013)