Pro-Moscow parties have taken the lead after elections in Moldova, early results show. The poll is seen as putting Moldova at a crossroads between closer ties with Russia or Europe. 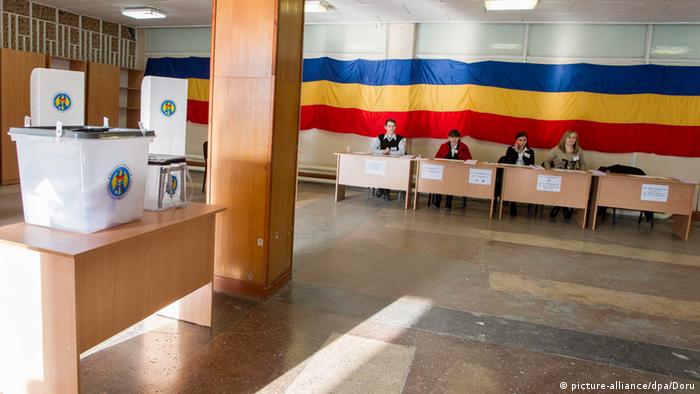 Moldovans voted on Sunday in parliamentary elections widely seen as a referendum on whether to align with Europe - and re-elect the current coalition government in favor of this - or pursue closer ties with Russia.

With 27 percent of the vote counted, early results put the pro-Russia parties in a strong lead, gaining more than half of the results. The Socialists, who want Moldova to join a Russian-led economic bloc, was in the overall lead at 23 percent, followed by the Communists on 20 percent.

The Liberal Democrats and the Democrats, which have ruled the ex-Soviet republic since 2009, were on 17 percent and 16 percent respectively.

The landlocked country's electoral commission said voter turnout was nearly 56 percent of the 3 million registered voters. For the vote to be valid, a third of eligible voters must cast a ballot. Lawmakers will serve a four-year term in the 101-seat parliament.

The vote also comes amid heightened East-West tensions over Ukraine. Moldova, like Ukraine, has a pro-Russia separatist region in its east.

Russia, which supports the breakaway territory of Transnistria on Moldova's eastern border, imposed an embargo on many Moldovan food imports in retaliation for the signing of the accord with the EU.

Authorities in Transnistria have banned its roughly 550,000 residents from voting in the elections, though several thousand are expected to do so in regions still controlled by the central government.

Moldova's Prime Minister Iurie Leanca, who in June signed a trade and association agreement with the EU, said he had voted for a "European Moldova - for a Moldova with justice."

"Everything ... indicates that Moldova cannot exist without Europe," he said.

It was a turbulent week leading up to the poll, with the pro-Russian Patria party banned from competing on the grounds it received foreign funding, which is illegal. The leader of the party, Russian businessman Renato Usatii, fled to Russia.

Usatii's party was expected to win up to 15 percent of the vote. Analysts warn its barring from the poll could fuel protests after the vote.