The media hype around Indian PM Modi is usually immense, as was apparent during US President Obama's India visit. But communications expert Shakuntala Banaji says it camouflages the South Asian country's real issues. 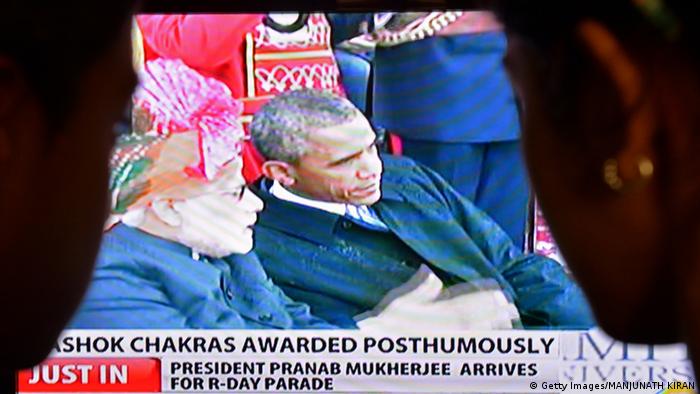 Most people agree that Indian Prime Minister Narendra Modi is a charismatic leader and a fine orator, but some media analysts say the Hindu nationalist is even better at projecting these traits, and the grand image of a 21st century Indian leader, to his countrymen as well as an international audience. The run-up to last year's parliamentary elections was proof of Modi's extraordinary media campaigning; it not only gave him an edge on his political rivals but also attracted foreign attention. Some experts even compared Modi's media handling of the May 2014 vote to US President Barack Obama's 2008 election trail.

President Obama's recent visit to New Delhi was a huge success for Modi's government not only in terms of the bilateral trade and defense deals that the two countries sealed but also in terms of its media projection. From the Indian PM's warm gesture of receiving and embracing President Obama at the airport, and the candid joint press conference, to presenting a "progressive India" image by allowing a female security officer to lead Obama's guard of honor, everything was well-orchestrated for the local and international media. 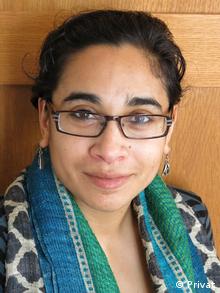 Banaji: 'The hype, the smoke and mirrors will not have fooled quite a lot of people in India and abroad'

But in a DW interview Shakuntala Banaji, a media and communications expert at London School of Economics, says that these media "gimmicks" are also blinding the world to India's numerous problems, ranging from human rights violations and violence against women to the rise of communalism and religious politics under the current Bharatiya Janata Party's (BJP) right-wing government.

DW: As a media expert do you think that the "rising India" image projected by PM Modi's administration limits our ability to look at India's deeper and more serious problems?

Shakuntala Banaji: Yes, it has that effect on some people, and judging by the way the trivial issues about Obama's trip have taken over the social media, it has the similar effect even when the coverage is satirical or even critical. But then there are many Indian citizens who are openly critical or quietly skeptical about the policies of the current Indian government, and Prime Minister Modi's old and new prejudices. The hype, the smoke and mirrors will not have fooled them.

There are also millions of Indians to whom the media spectacle meant nothing; they probably neither had access to it, nor saw it. They were busy avoiding getting shot by military police in some restive states, attempting to fight against the pollution of their land, struggling to feed themselves for another day, and to stay out of the way of zealots of various faiths. The everyday miseries, privations and struggles of millions of poor and extremely poor people across the country did not pause for the spectacle of this diplomatic event.

What do you have to say about the Indian and foreign media's coverage of Obama's visit?

Indian Premier Narendra Modi and US President Barack Obama have reached a series of groundbreaking agreements likely to reshape relations between New Delhi and Washington in the years to come, writes DW's Grahame Lucas. (26.01.2015)

Barack Obama is set to become the first US president to be chief guest at India's Republic Day Parade, a sign of expanding ties between the world's two largest democracies despite a host of thorny issues. DW examines. (22.01.2015)

India's religious conversions: 'Modi can stop them if he wants'

Coverage by the Indian and foreign media was not identical; there was obscene sycophancy by much of the mainstream Indian media which was picked up and amplified by Modi's "army" of social media volunteers. The international media mostly made use of brief reports devoid of any historical perspective, and a matter-of-fact coverage. There was also some mockery about Modi's ostentatious outfit in the British media, but the spectacle was clearly addressed to the Indian diaspora.

President Obama didn't say much about the human rights situation in India, more specifically the increasing threats to the country's religious minorities under PM Modi's rule. Is the issue not important to the US administration?

It would have been very difficult, in terms of diplomatic protocol, for Obama to address issues of minorities under Modi's government. He has had plenty of experience with not confronting similar issues of injustice and violence in relation to Israel's human rights record, for example. In fact, the very act of visiting India with such pomp suggests that considerations of minority rights are an issue of low significance. So, I had no expectations that he would speak out about the Gujarat pogrom or the rise in anti-minority hate crimes in India.

However, President Obama did speak at some length about the importance of religious freedom and respecting diversity, which is being interpreted in some sections of the Indian media as a direct attack on religious chauvinism.

The media highlighted the female officer leading President Obama's guard of honor in New Delhi as a sign of liberal India. What is your take on it?

Obama was not entirely silent on the importance of women's equality. He is a pragmatist, and it doesn't look good to be doing business with a country where reports of gang rape and forced marriage are every-day matters in the press. But for other reasons he did address this issue in his speeches saying very specific things such as "Every girl's life matters", "Every daughter deserves the same chance as our sons" and "When women are able to work, families are healthier, communities are wealthier and countries are more prosperous." 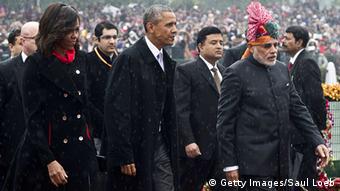 Banaji: 'President Obama did speak at some length about the importance of religious freedom and respecting diversity'

Last but not least, some experts are of the view that the international support for Narendra Modi's economic policies is emboldening him to pursue a ruthless anti-working class agenda domestically. Do you agree with this view?

It is certainly true that support for Modi's harsh neoliberal policies by international capital, and by its primary stakeholder, the United States, helps him to pursue his domestic agenda. It is also true that this domestic agenda is brutal for the Indian poor and working classes, dispossessing many and lining the pockets of the wealthiest in the land.

But this was happening long before the US reignited its friendship with India, and just as ruthlessly with the complicity of many in the Indian middle-classes. Also, just because the US wants to profit from its trade links with India does not mean that it supports all of Modi's policies. If practiced too openly, such policies and corruption would lead to some US citizens calling for a weakening of ties and Obama will have to address that as well.

So, for whatever it is worth, while negotiating deals that transfer much of the risk for nuclear accidents caused by US companies onto the shoulders of the Indian public, Obama spoke about combating inequality and ending child labor. And while negotiating those same deals barely a blink away from Fukushima, Modi spun the local media to suggest he had given Obama a piece of his mind on a permanent seat on the Security Council.

Shakuntala Banaji lectures on International Media and the Global South, Film theory and World Cinema, and Critical Approaches to Media, Communication and Development in the Department of Media and Communications at the London School of Economics.