Many of our ideas about the natural world and environmentalism can be traced back to two trailblazing 19th century explorers who continue to inspire scientists heading to the Amazon rainforest to identify new species. 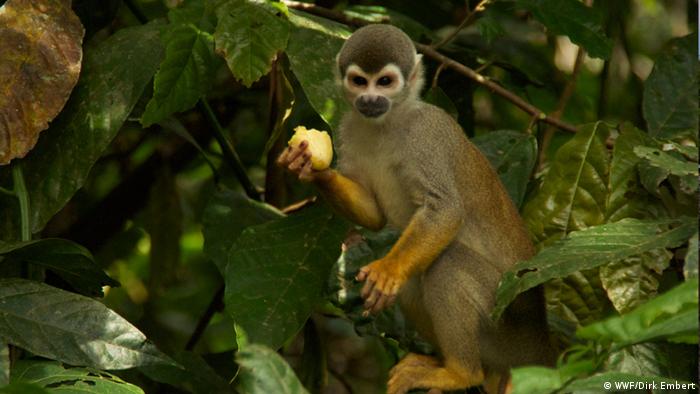 From spectacularly plumaged birds, rare reptiles to striking mammals such as the ocelot and tapir, the Amazon Basin’s lush tropical forest is home to one in ten of the world’s animal species. The primeval tangle of canopy and undergrowth also has a dazzling diversity of plants – a hundred different tree species can be found here on a single hectare of land.

It's little wonder then that traveling to the region in 1799, Prussian explorer and naturalist Alexander von Humboldt was so overwhelmed by the natural abundance he encountered that he wrote, “I will take leave of my senses if these wonders do not soon cease.” 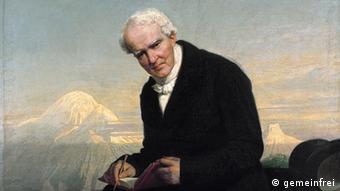 Thankfully, he didn't. Instead, Humboldt, often credited as the first modern scientific explorer of the Amazon, brought back gripping tales of his South American adventures. And, ever since generations of scientists inspired by the region’s incredible richness of life have made major contributions to our understanding of biodiversity and mankind’s place in nature.

Dirk Embert, an expert on reptiles at the World Wildlife Fund, says the excitement of exploring the Amazon's remote corners has far from diminished in the 200 years since Humboldt was there. Embert recently returned from a trip into areas of the Colombian Amazon that may have discovered three previously unidentified species - a frog and two fish.

“Going into virtually untouched areas is a great feeling. You really do feel like Humboldt or someone – walking through these areas where supposedly no one has been,” he says.

Outsiders that is. Embert is quick to point out that just as in Humboldt’s days, “undiscovered” regions are generally well known to indigenous people. His recent expedition included meeting the chiefs of eight local communities. 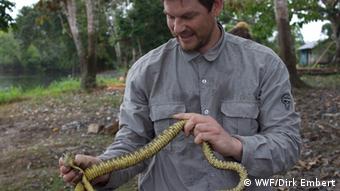 WWF's Dirk Embert holds a venomous snake of the Bothrops genus, on a recent trip to the Colombian Amazon

“They really helped us to understand the area – not to get lost, which is very important! – but also to find the species,” he says. “They have a completely different eye and are able to spot species from 20 meters away, under a leaf… You can learn a lot talking with them about the species because they know a lot about their behavior.”

Though that may seem almost like common sense today when it comes to conservation, it wasn't back during Humboldt's time in the 19th century when he underlined the value of indigenous knowledge. At the time, the idea that “savages” living in the forest might have something to teach the Europe scientist was a controversial position.

“Humboldt understood that if he wanted to learn about a specific place or ecosystem, he would also have to talk with the people who have lived there for a very long time,” says Mascha N. Gemein who has written on Humboldt for her Ph.D. in American Indian Studies at the University of Arizona.

“He also sensed that their language would reflect empirical knowledge about that place – which is one of the reasons he collected indigenous vocabulary.”

Today, this chimes with the development of ethnobiology and biocultural diversity, which see links between sites of rich biodiversity and the diversity of cultural and linguistic traditions in the same areas – and the idea that their conservation should go hand in hand.

Such interdisciplinary approaches have become increasingly important over recent decades, but Humboldt was working at a time of specialization when the individual sciences were staking out their territory.

Petra Gentz-Werner of the Alexander von Humboldt Research Institute at the Berlin-Brandenburg Academy of Science, who has authored two books on Humboldt, says the Prussian naturalist was both old-fashioned and ahead of his time in blurring these boundaries. 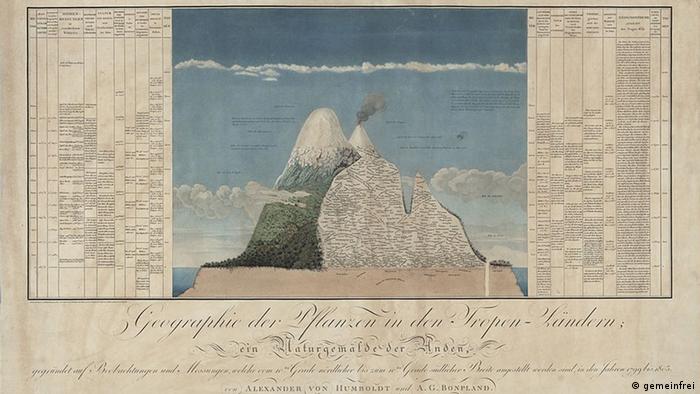 Humboldt combined geology, meteorology, botany and geography to formulate his theory of plant geography. Tableaux such as this, which shows Chimborazo in the Andes, bring together information from these different sciences

“He was the first person to define common laws of plant geography, which he saw was dependent on plant physiology, meteorology, geology, zoology and even the cultural history of mankind, which interacts with the natural environment.”

Humboldt’s work on botanical geography certainly laid the foundations for modern biogeography, which examines the geographical spread of species and ecosystems and how this distribution changes over time. But, it is British naturalist Alfred Russel Wallace who is considered the founding father of the field. 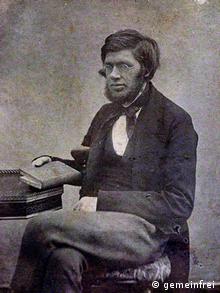 Alfred Russel Wallace, who developed the theory of natural selection at the same time as Charles Darwin, traveled to the Amazon in 1848

Wallace went to the Amazon in 1848, looking for evidence of transmutation – the 19th century idea that one species changes into another – as well as a mechanism to explain it, which he later found in the theory of natural selection.

George Beccaloni, curator of the Wallace Collection at the Natural History Museum in London, says that Wallace’s observations in the Amazon informed the British explorer's ideas on how different species developed.

“Wallace noted that closely related species of monkeys were found on different banks of the Amazon River. That became what’s known as the ‘riverine barrier hypothesis’, which people are still working on today… it was obvious to him that the river was a barrier that somehow was involved in the speciation process,” he says.

Wallace didn’t fully formulate his theory of natural selection until 1855, when he wrote to Charles Darwin from Malay Archipelago setting out his idea, unaware that Darwin had been developing the same theory in parallel. And, today it is Darwin who is remembered for the discovery and has become a household name while Alfred Russel Wallace has largely remained in his shadow. 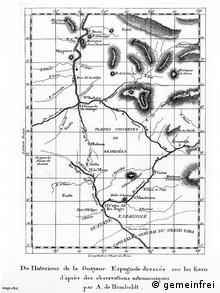 Humboldt's map of the Rio Negro, the Amazon's largest tributary. Wallace also made a map of the river, which is considered to be more accurate than Humboldt's early attempt

But, Beccaloni says that in focusing on geographical factors causing speciation rather than divergence caused by different populations adapting to niches within the same habitat, Wallace was “closer to the modern view of how evolution works.”

Like Humboldt, Wallace had a profound respect for the knowledge and culture of Amazonian peoples, which he compared favorably to the “barbarism” and inequality of Victorian English society, as well as to capitalism’s destruction of nature in the service “personal greed and avarice”.

In 1910 Wallace wrote, “To pollute a spring or a river, to exterminate a bird or beast, should be treated as moral offences and as social crimes.” Such environmental awareness was highly unusual for the time, but it echoes Humboldt’s sensitivity to the relationships between different species, including humans.

It was proof of Humboldt’s distinctive scientific mindset that he thought the only way to understand the world was to look at it as a whole, using all the physical sciences together, instead of breaking everything down into isolated parts and disciplines.

“Humboldt’s biggest legacy was his understanding not just of the particular but of the connections – the interaction between organisms and the cause and effect relationships in landscapes,” Mascha Gemein says. “He anticipated what we now know as ecology, which is fundamental to environmentalist thinking.”

That also applied to the interconnectedness of human societies and their resources of which Humboldt had a prescient view.

“The Amazon was the area he knew in detail but he was a global thinker and had the whole world in focus,” Gentz-Werner says. “He was aware that the wealth of Europe was founded on the New World, a relationship I believe he saw as exploitative.” 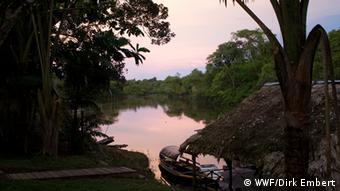 An evening view from one of the indigenous communities around the Tarapoto Lagoon, taken on a recent WWF trip to the Colombian Amazon

Much has changed since the days of the 19th century Amazon expeditions and the resulting ideas and theories that emerged from them. Embert says that while Wallace was the first explorer to provide detailed information on the location of specimens he collected, today, GPS data is always recorded, and observational descriptions of species are now complemented by genetic analysis.

Humboldt and Wallace would no doubt be as fascinated by such developments as much as they would probably be horrified by modern challenges such as climate change. But it seems likely they would also recognize the human agency behind today’s environmental threats, and scholars of their work say their ideas are more relevant than ever.

“Humboldt was a man of the 19th century but with very modern ideas that need to be thought about today,” Gentz-Werner says. “We have to realize that what we do has consequences in areas we don’t expect – it’s a big balance.”